Way back when, we noted that mathematical odds and political science all but ensure that eventually, scandals happen in presidencies.

But the Obama White House, for many years, defied the overall trend of scandal, and remained scandal-free for a very long amount of time. In May 2011, political scientist Brendan Nyhan recognized this -- and determined it was due:

Going forward, though, the odds of scandal are high and rising. Obama already faces low approval among GOP identifiers and a similarly hostile climate in Congress. Back in March, New York Times columnist Paul Krugman noted that Republicans hadn't yet made a serious effort to back up claims that the Obama White House is "one of the most corrupt administrations." As more time passes, pressure to find evidence of misconduct is likely to build -- my data suggest that the risk of scandal increases dramatically as the period without a scandal stretches beyond two years.

He even provided a helpful chart, for those who love things like, "PRESIDENTIAL SCANDAL TIMES A-LOOMING ON THE HORIZON IN ONE CHART": 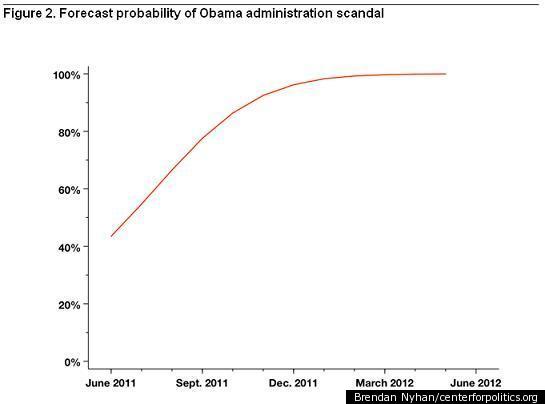 So, Nyhan was off by about a year. But as we all eventually learn the hard way, Nyhan ALWAYS COLLECTS HIS MONEY, HONEY. And over at Ten Miles Square on Tuesday, he got his swag on:

My research suggests that the structural conditions are strongly favorable for a major media scandal to emerge. First, I found that new scandals are likely to emerge when the president is unpopular among opposition party identifiers. Obama’s approval ratings are quite low among Republicans (10-18% in recent Gallup surveys), which creates pressure on GOP leaders to pursue scandal allegations as well as audience demand for scandal coverage. Along those lines, John Boehner is reportedly “obsessed” with Benghazi and working closely with Darrell Issa, the House committee chair leading the investigation. You can expect even stronger pressure from the GOP base to pursue the IRS investigations given the explosive nature of the allegations and the way that they reinforce previous suspicions about Obama politicizing the federal government.

In addition, I found that media scandals are less likely to emerge as pressure from other news stories increases. Now that the Boston Marathon bombings have faded from the headlines, there are few major stories in the news, especially with gun control and immigration legislation stalled in Congress. The press is therefore likely to devote more resources and airtime/print to covering the IRS and Benghazi stories than they would in a more cluttered news environment.

I am not nearly as canny as Nyhan. (Nor am I as uncanny. It's weird how the English language works.) Back in May 2011, I assayed Nyhan's work and predicted, "scandal is all but certain. And yet I'll still bet you $10 that when and if it surfaces, the story won't be broken by the White House Press Corps." ABC News White House Correspondent Jonathan Karl broke the story on the 12-times-revised Benghazi talking points, so I guess I owe him $10.

He's got a whole administration full of people who could slip up at any moment and, say, funnel arms to anti-American extremists.

Yeah, and then I linked to David Wood's story, "Anti-American Extremists Among Libyan Rebels U.S. Has Vowed To Protect", like a boss.

Nyhan also points out that it is in a second-term "scandals are most likely to take place." According to Karen Tumulty and Philip Rucker, historians believe that scandals are part of something they call the "second-term curse." They get the obligatory quote from Michael Beschloss:

“After the election, the president said he was familiar with the literature on second-term difficulties,” said presidential historian Michael Beschloss. “We scholars may be about to see whether knowledge of that history can help a president when they begin to strike.”

“What we’ve seen in the past week reignites the question scholars ask about problematic second terms,” Beschloss added. “Is it mainly a coincidence that every president of the past 80 years has had a hard time after getting reelected? Or is it somehow baked into the structure of a second-term presidency that some combination of serious troubles is going to happen?”

The takeaway, I guess, is that America should just not have second-term presidents.

Mired In Second-Term Scandals? Political Science Says, 'I Told You So!'
Two-Term Presidents