I've always been a thinker. By "thinker" I mean that I think things to death, play out every possible scenario, and plan for every contingency.

This was certainly the case during the aftermath of the preschool zipper incident of 2015.

My 4-year-old daughter's preschool class was 10 minutes late coming out for pick up on the day of the incident. As her teacher came over to my car, I knew something was up. Apparently they are trying to get the kids to zip their own jackets, and my 4-year-old daughter is struggling with it. That particular day, she broke down in tears after she hit maximum zipper frustration. Apparently she cried for me and said she was sick, as part of her mini meltdown. This in turn held up the class from getting out to pick up on time. This has happened before too, but this day was the worst so far.

In my obsessive quest to make sure I am not failing as a parent (or perhaps in a subconscious effort to prove to myself that I am), I started pondering what to do.

The thinker in me has since played out this entire thought process scenario in an effort to determine if I over think things. (Ya think?). 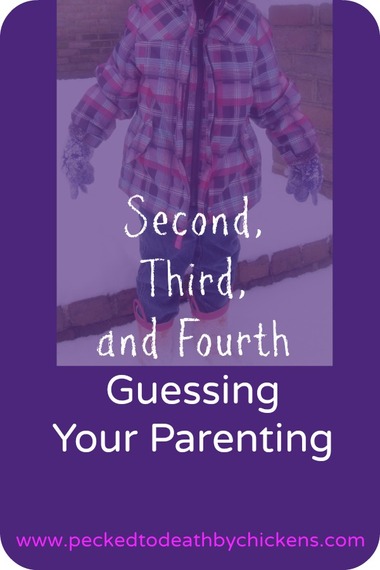 My inner workings during the approximate five minute drive home went something like this:

I wonder what her teacher wants me to do? Surely she knows the proper parenting response. Should I ask her? If I ask her will she think I am weird and unable to make parenting decisions? I definitely shouldn't ask.

Maybe I'll just get her a coat with snaps, buttons, velcro, magnets or toggle buttons! If Paddington could maneuver toggles, she certainly can. Her hands are totally more dextrous than paws.

Maybe I should just work with her on keeping her frustration in check, after all, what kind of parent solves this problem by running out to buy a non-zip coat? Probably the same kind that lets Super Why! and Team Umi Zoomi babysit their kids from time to time. Uh-oh.

Maybe her teacher is sick of being late to pick up and wants me to slap a poncho on her, and call it a day. If it were me, I'd want to get out to pick up on time and unload those unruly little urchins as quickly as possible.

How could I have sent her to school with that jacket anyway? It has 2 zippers and is totally confusing and hard to zip even for me.

I'm getting her something with buttons. Or maybe just an easier zipper. How do you even test for zipper ease besides bringing the child to try out zippers all day, possibly leading her into a zip-induced hysteria.

There are only a few more months of winter. A new coat is a waste of money. I just need to teach her to zip.

She has a short fuse, and no amount of zipper therapy is going to change that. Plus, I hate teaching kids things. That is so bad though. Who hates teaching their own kids stuff? Me. Especially zipping.

I wonder if the other parents know that late pick up was due to my failure to teach proper fastener-specific fine motor skills?

Rinse and repeat for the two days until she had school again.

You wouldn't know to look at me that I'm stewing things up in my quietly obsessed cerebral pot, since it all goes on in the background of my brain while I do other things. I'm quite good at it, and probably hit my peak during the diagnosis search for my son's inability to talk. Typically the outcome is that things are not nearly as big a deal as I imagine them to be, and they work themselves out with or without me. Although I know this, I still can't seem to shake the run away think train.

In this instance, I was on the verge of getting her an easier to zip coat. I knew that her next day of school was one where she would be staying late for a program and thus, wouldn't hold up the pick up line with drama, so I was still pondering Paddington-wear. When I quizzed her later that day about how zipping had gone at recess, she said it had gone fine and she'd just used the trick that Grampy had taught her.

Here I go again... Maybe I can get some laundry done while my brain works.

Really? You ignore me 95 percent of the time but internalize Grampy's zipper trick and apply it in your most frustration-prone environment?

And when was this covert zipper improvement session?

And why didn't he teach me this trick? I was little once. I had a zipper.

I still have a zipper that chafes me on a regular basis. I'm 39 and there is no reason I should be zipping if I don't want to. I don't like turtle necks either. Or corduroy. Or...

Editorial Director and Founder of BeyondYourBlog.com