I have not even contemplated my second marriage, as yet I have barely healed from my first. I do however though love each and everyone, courageous and open hearted enough, to remarry after a divorce. So for this article I had to reach out to an amazing group of men and women, who are kind and brave enough to share their beautiful stories of love and weddings, done right the second time around. I think although my research covered only perhaps 24 couples, it is safe to say, weddings second time around, are usually in many ways polar opposite, than the first ones. From the stories shared with me, the first was usually pretty traditional affair, lulled into your families or partners expectations, both religiously and culturally 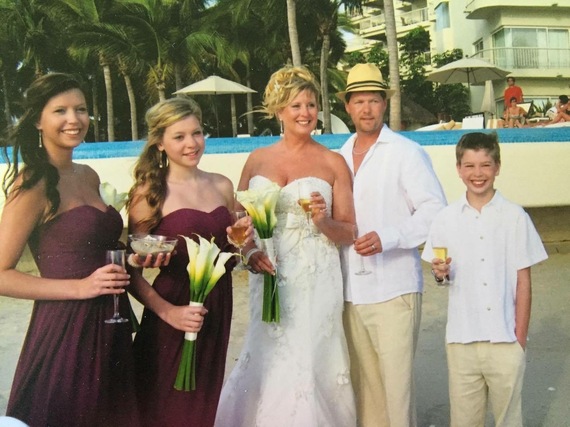 Carolyn Colling, British Columbia, shared with me how her first wedding although lovely and very traditional, just didn't hold for her the symbolism of her Mexican beach second wedding. Carolyn with her second husband were able to choose the destination wedding of their dreams, along with a sand ceremony, flip flop beach wedding ,which also including their children. Having a destination wedding second time around, seems like a popular choice, and by definition limits your guest list, usually making these second weddings more intimate affairs, and what a beautiful idea to incorporate your children into the wedding ceremony, a really union of joining not just two people, but two families together also. 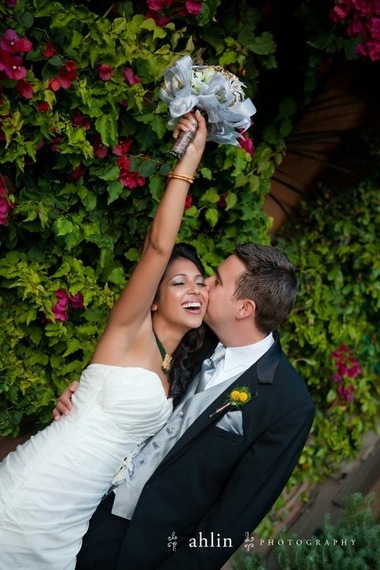 My own first wedding was super traditional from the church, the 350 guests, few of which I actually even knew, to the giant dress and the almost obligatory DJ, playing some pretty obnoxious, wedding music through the night. I am not sure if I will ever get married again, but I do know for sure it will not be traditional. Much like the sentiments shared by Indrani Philips, California, for her first wedding she followed her families Indian traditions and had a 600 person, beautiful Indian wedding ceremony, complete with henna, saris and not seeing the groom, until the very end of the wedding celebrations. Like a lot of us especially when we are younger, Indrani felt it was easier to cir-cum to her in laws and families wishes, than really have a lot of a say in what she wanted. Been there- done that also, so when she and her new husband set out to plan their wedding, she was thrilled to be able to have a wedding, that was a true collaboration between them, but also allowed her to express herself and the couples love for each other, by choosing things that they felt where unique to their union. Indrani chose a stunning white dress and hand made herself a stunning brooch bouquet, wanting any monies to be spent on things they could keep. She says her second wedding total was only a small fraction of her first cost, yet people will still comment to her today, that it was the best wedding they have ever been too. 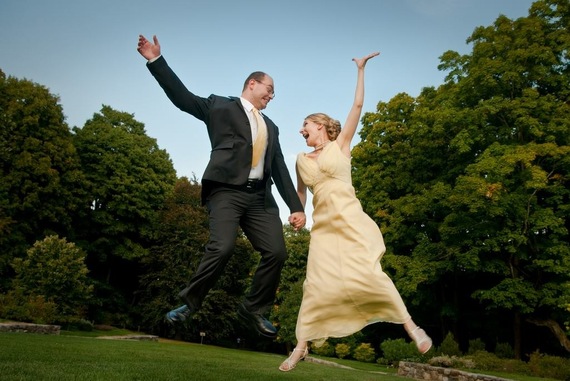 One of the sweetest stories I heard was from Elizabeth Dankoski, North Carolina, who went from a first wedding with the traditional diamond ring, and white wedding dress, to a enchanted outdoor woods wedding, wearing a yellow dress with a wooden ring, she felt that the second time around the only people she had to please was her and her new fiancee. The meaning had shifted from the trappings of a wedding, to the sincere expression of their personalities and their love towards each other in the second wedding. Which if you really think about it is of course what counts. It's not the 20k Vera Wang dress or the inclusion of hundreds of people, the most important part of any marriage and wedding should always be the sincerity of the love, and commitment, between the couple getting hitched.
I can't references every person wedding stories I was told, but the common thread among them, was that they almost all chose a kind of wedding, totally different than their first ones. Maybe subconsciously they are aware the other marriages ending in divorce, so wanted to set a different stage for their new marriages to begin. I think in many ways being married for second or third time, gives you a get out of tradition and family obligations free card, couples are older, most couples pay for their own weddings second time around, so no need even to listen to anyone else's input. Hopefully they are also wiser and they see the massive amounts of money spent on the weddings, as wasteful and not actually what a great marriage is about. I love how creative and fun people can get when left to their own devices, whether it's a stunning beach wedding, in flip flops, to an outdoor, woods wedding, to a small intimate ceremony where you are able to symbolically join two families to include your children. Perhaps first time couples, can take a few notes out the second time wedding playbook and realize that no matter how much money you spend, the only things you ever get to really keep from your wedding are the ring, photos and the spouse, so all focus maybe should be on making wise choices in those. Especially clearly the last thing in that list.

More:
weddingssecond marriageremarriage Life After Divorce
Newsletter Sign Up
An essential daily guide to achieving the good life
Subscribe to our lifestyle email.
Successfully Subscribed!
Realness delivered to your inbox