With studio apartments in Manhattan now hitting nearly $3,000 a month, the closest thing most Millennials will ever get to a house party in Gotham will be snagging a VCR tape of the Kid 'n Play danceoff movie at their parents stoop sale. Last week during the "polar vortex" cold freeze, some lucky invitees did get access to a secret house party in a dilapidated building on the Lower East Side for two hours however. There wasn't much heat, no DJ, and your flask of Jack Daniels substituted as the bar, but if you made it in you scored a free condensed street artist show that is as rare as a New Jack Swing hit these days. 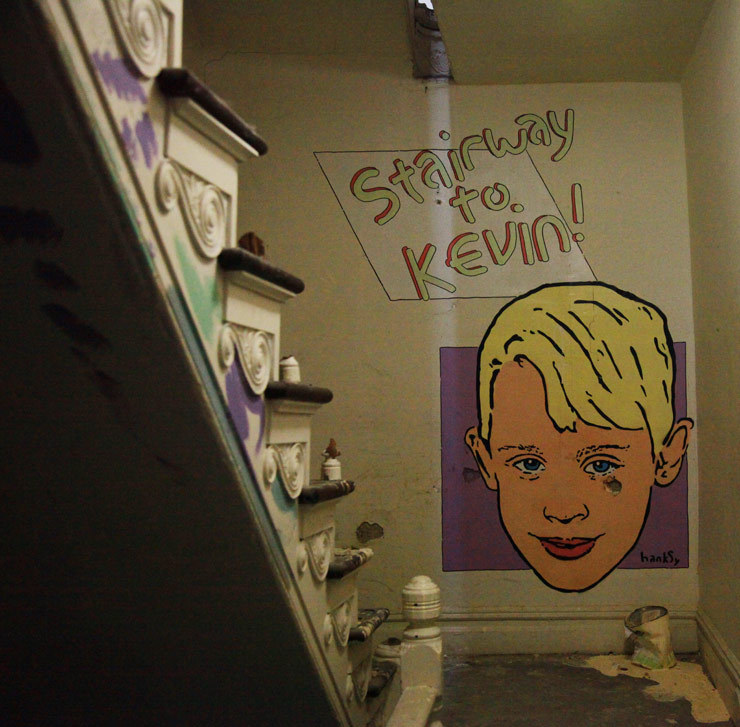 A subtle beam of light from Heaven (or Kevin) above Hanksy. (photo © Jaime Rojo)

A little more than 40 (mostly) street artists brought the four-floor former tenement building to life one last time before it will be destroyed -- and they did it almost entirely in secret over the course of a week. Just how secret this event was is debatable considering the multitude of blog posts and photos of it that appeared in the days following but in the Internet age, news about stuff like this goes viral no matter what.

All tolled, the varied collection of participants was a cross-section; a blurry screenshot of street artists on the New York scene along with a few graff writers, taggers, sticker slappers, painters, illustrators, aerosol experts, installationists, art school students, and visitors to the big city who happened to be around at the right time. Also, a couple of pyros. 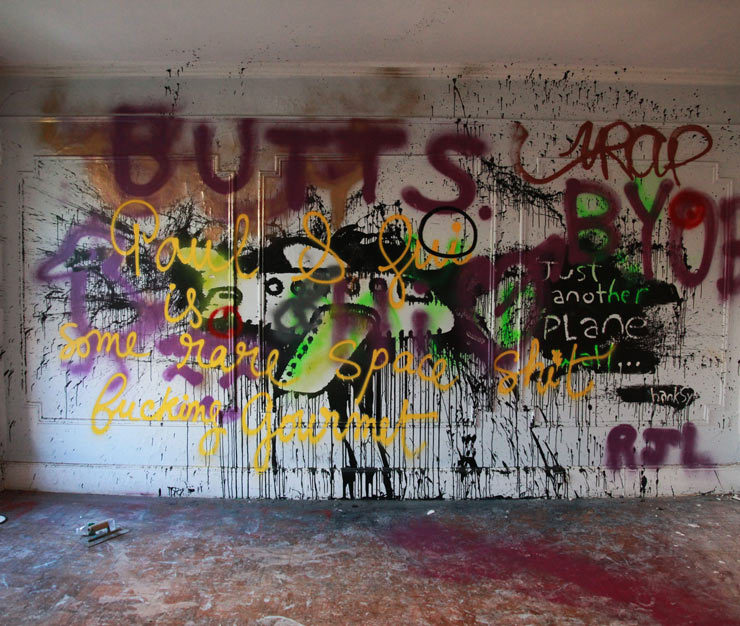 While this sort of artist takeover of an abandoned house or building is increasingly occurring in bankrupt cities and neighborhoods in America and Europe where no one wants to live except the creative types, you don't find this unruly and freewheeling expression much in the increasingly scrubbed and mall-like playground for the rich in Manhattan.

Similarly, producers of large street art/urban art events in global cities can deliver murals that make you salivate and on a scale that dwarfs this "event" thanks to corporate underwriters and shills for sneakers/sodas/urban-themed tampons these days, but few can truthfully rival the unpolished impromptu spirit of a semi-secret House Party jam session. For one week during installations and on opening night it was like the ghost of New York's downtown 1970s and '80s Bohemia was coming back to the island in all it's imperfectness to remind everyone of Manhattan's former greatness as a petri dish for experimentation and discovery. 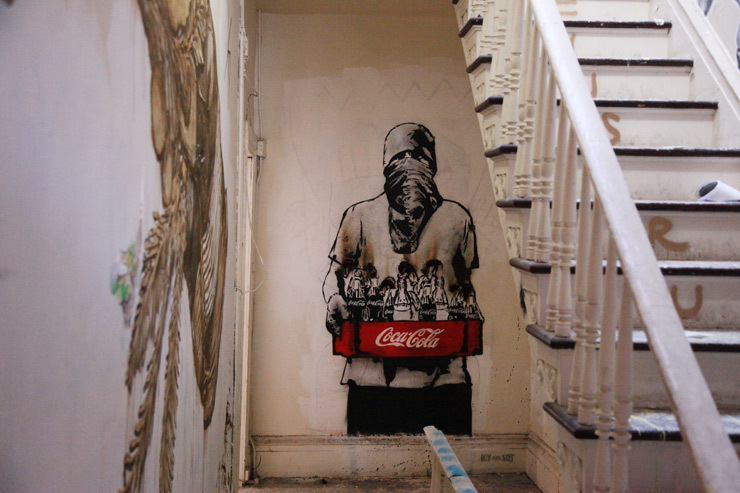 Considering the huge increase in sanctioned walls over the last two years in New York, this work looks surprisingly alive, and is just the sort of balm needed for the raw nerves of anarchists everywhere who have bemoaned the polished soul-deadening mural painting of late. Even if some of this looks sort of slap-dash and ragged in spots, and it does, it also gives off an air of being authentic and in-the-moment. 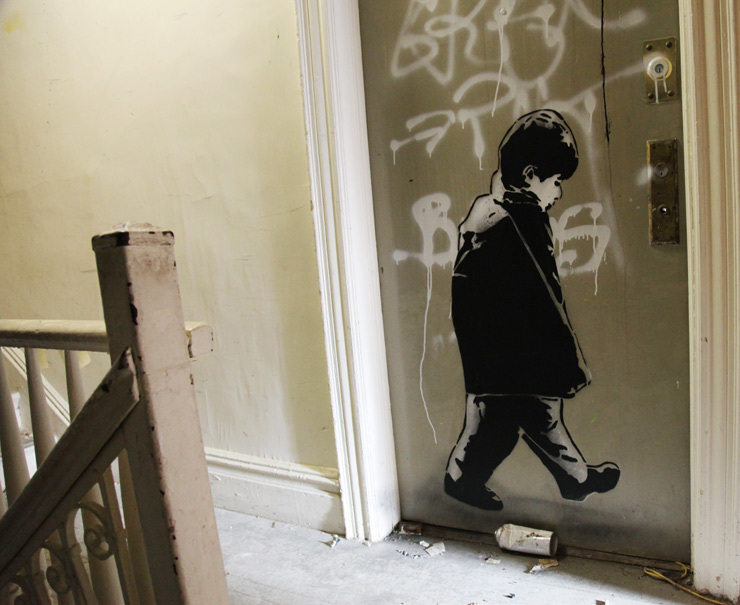 Notably, the ratio of penis, breast, and defecation-related themes was higher than your average art show but as you know, there is an audience for every artist, even the ones gravitating to bathroom humor as creative wellspring. Judging by the few hundred images floating around on Flickr and elsewhere, this pop-up was a hit for the people.

Given the growing number of artists communities that have blossomed outside of Manhattan, this could have been one of its last jams for street art. Yo! That's my jam!

And now please step aside as we build another luxury condo. 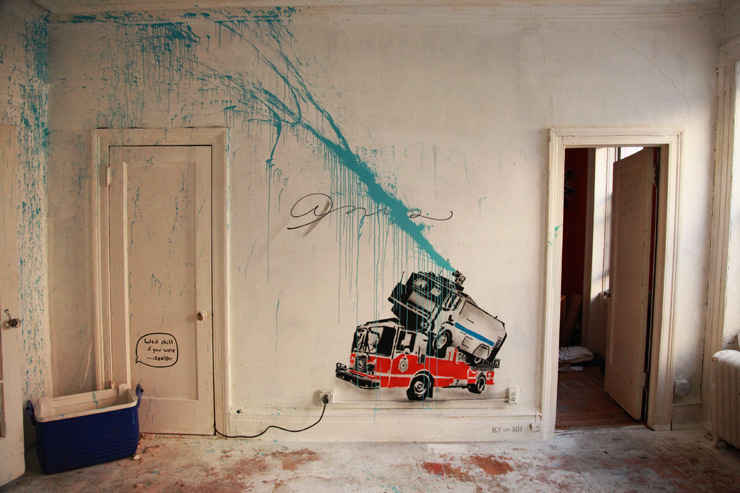 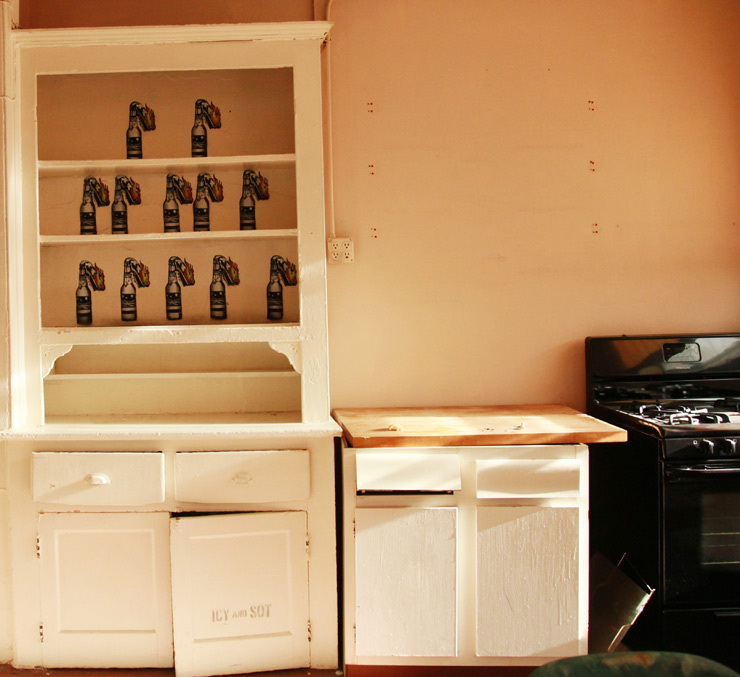 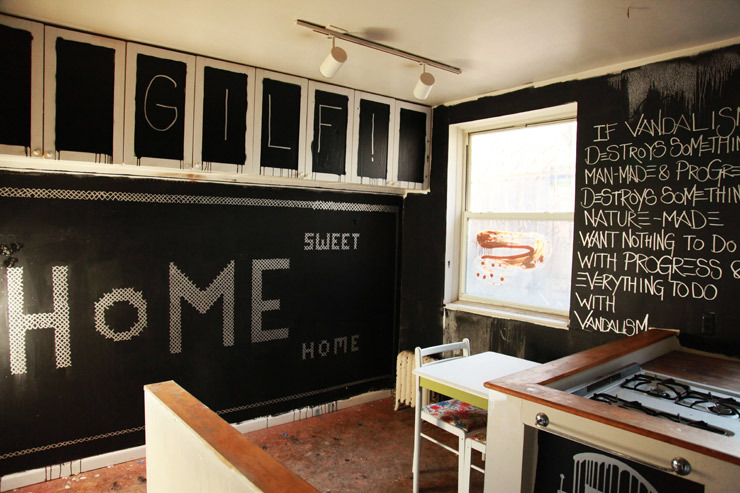 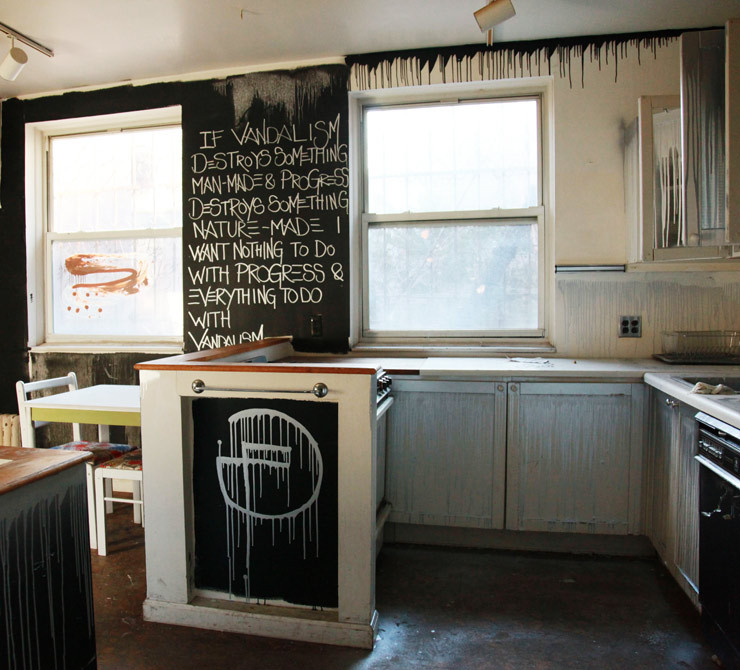 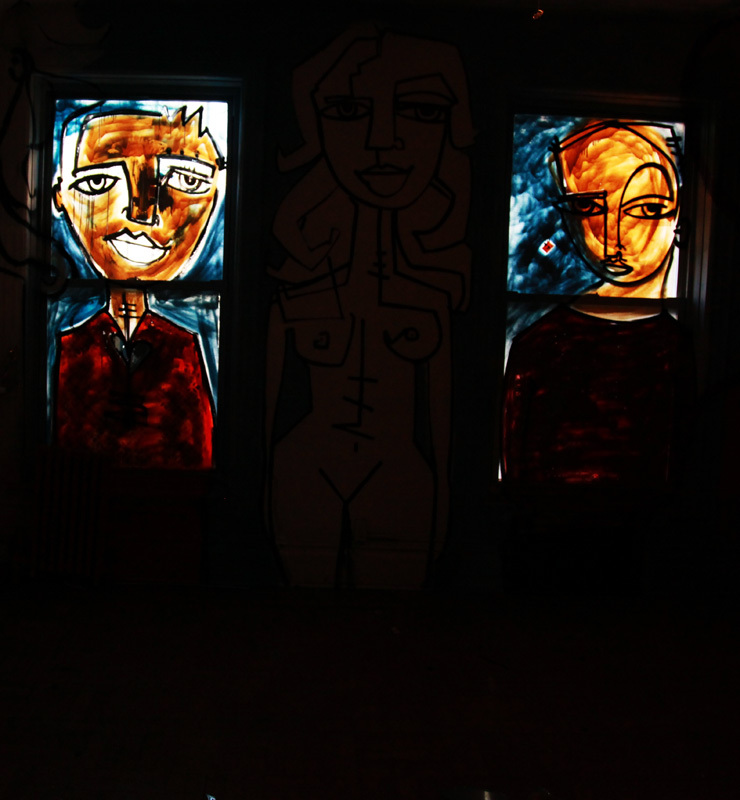 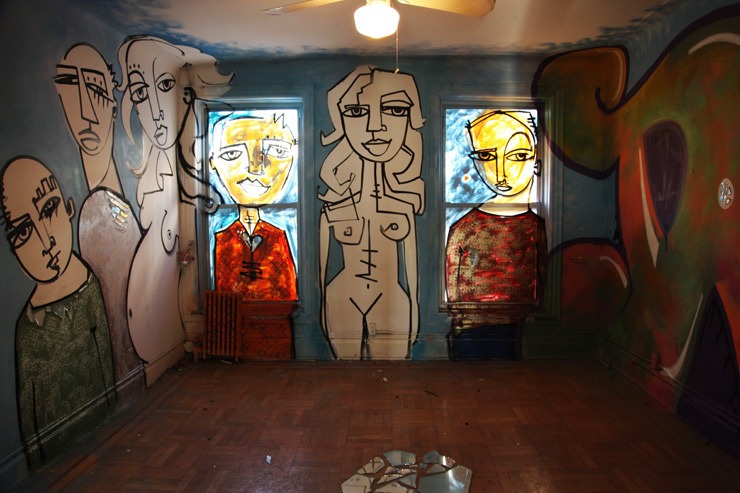 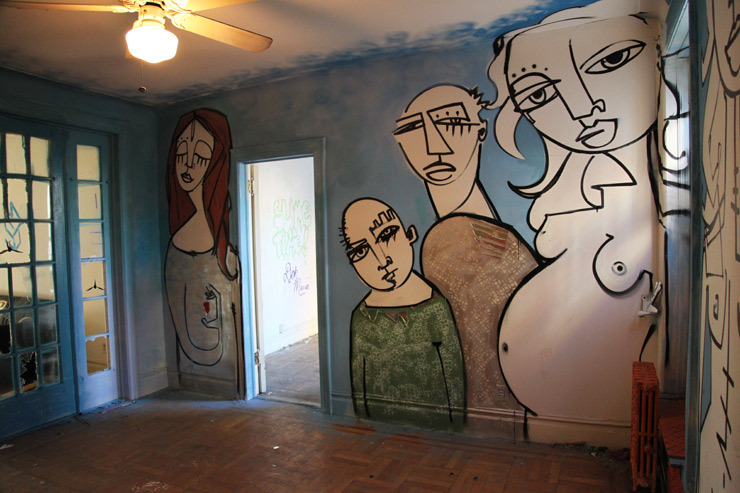 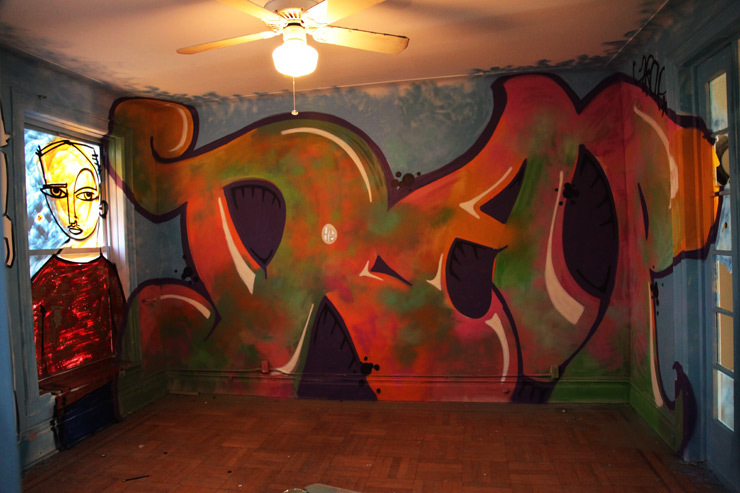 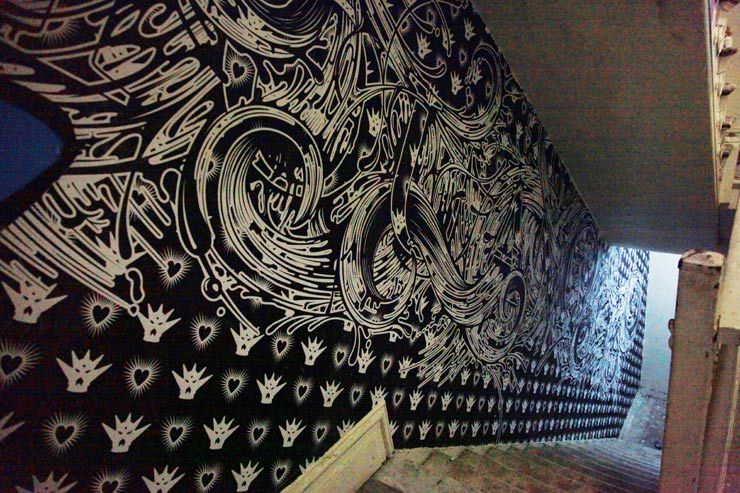 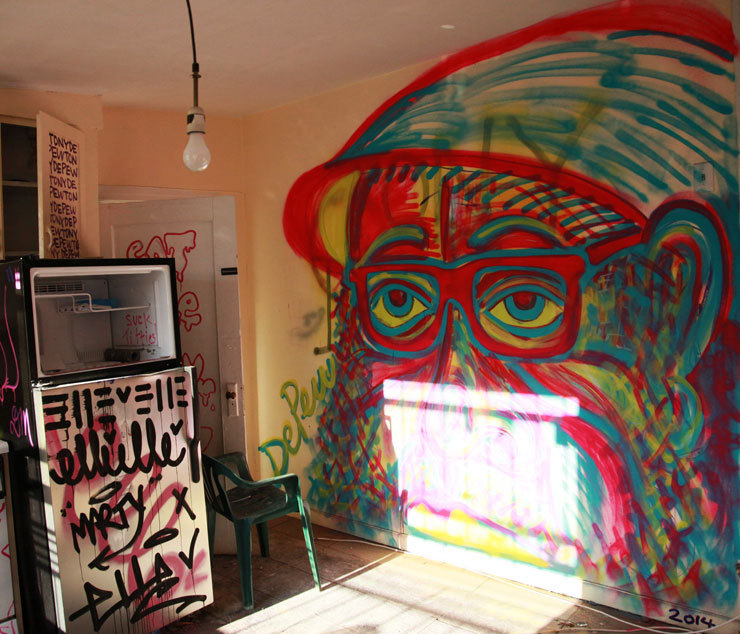 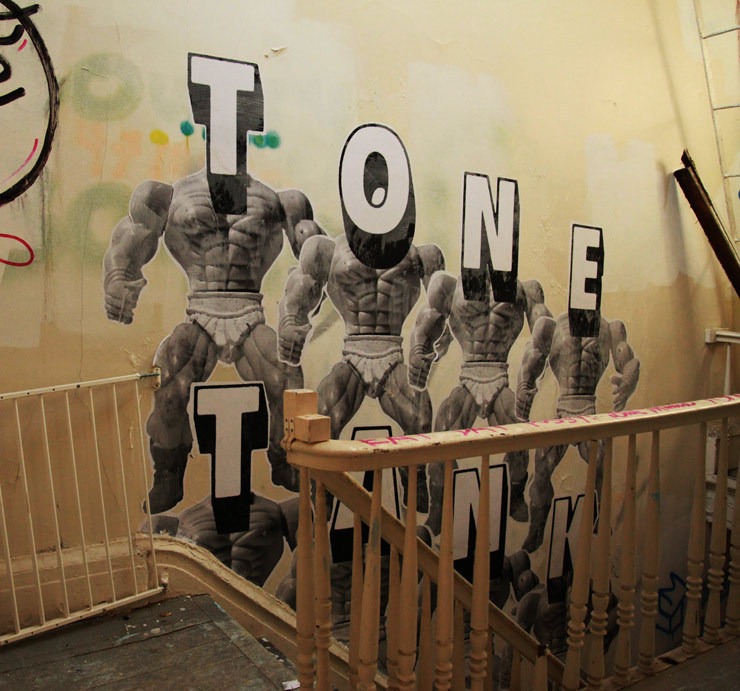 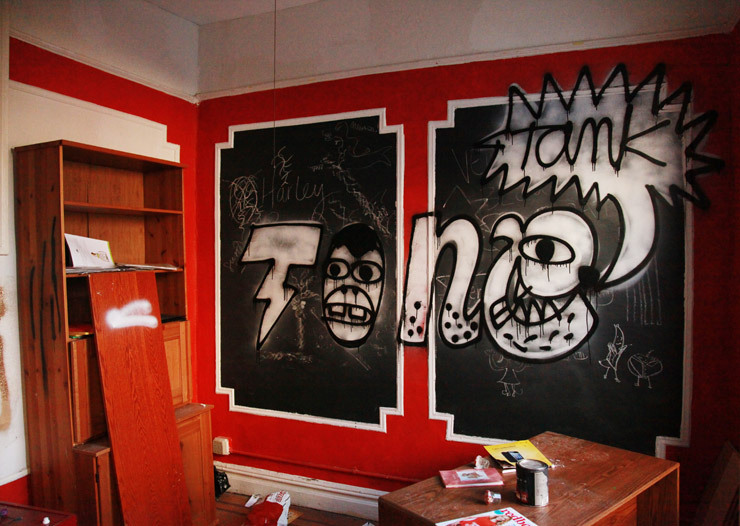 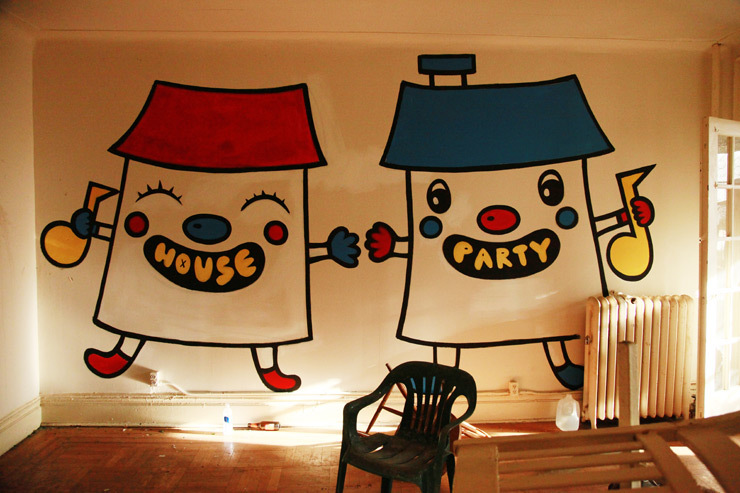 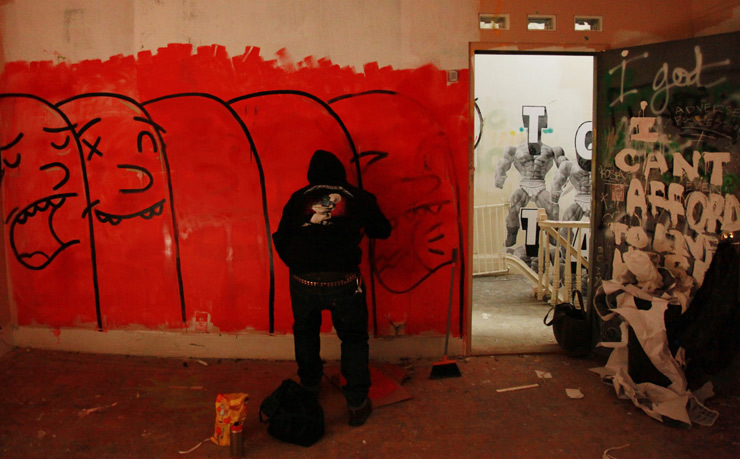 Royce Bannon at work on his installation. (photo © Jaime Rojo) 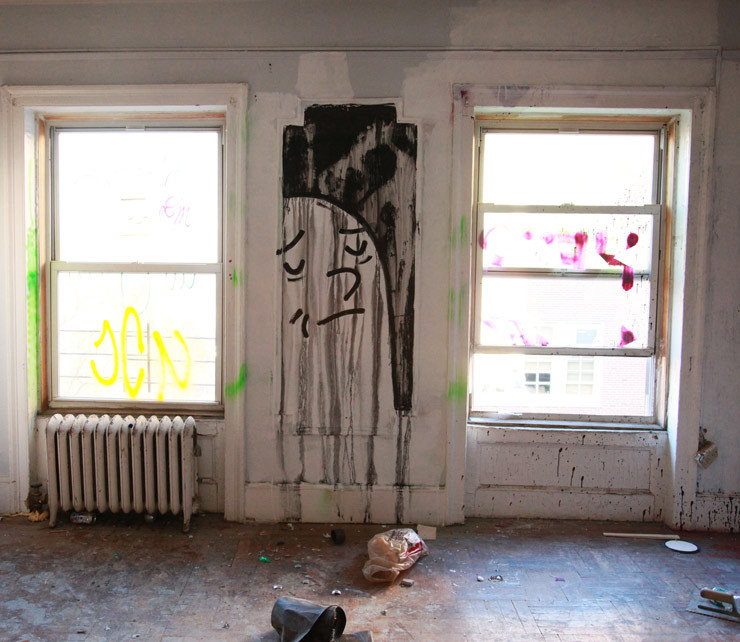 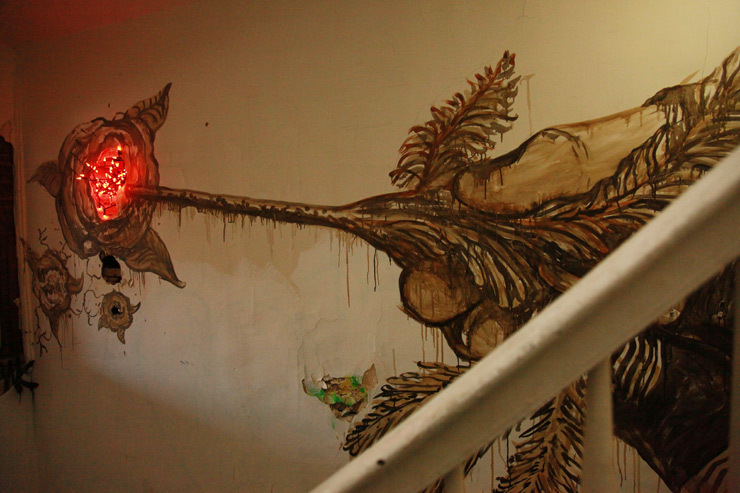 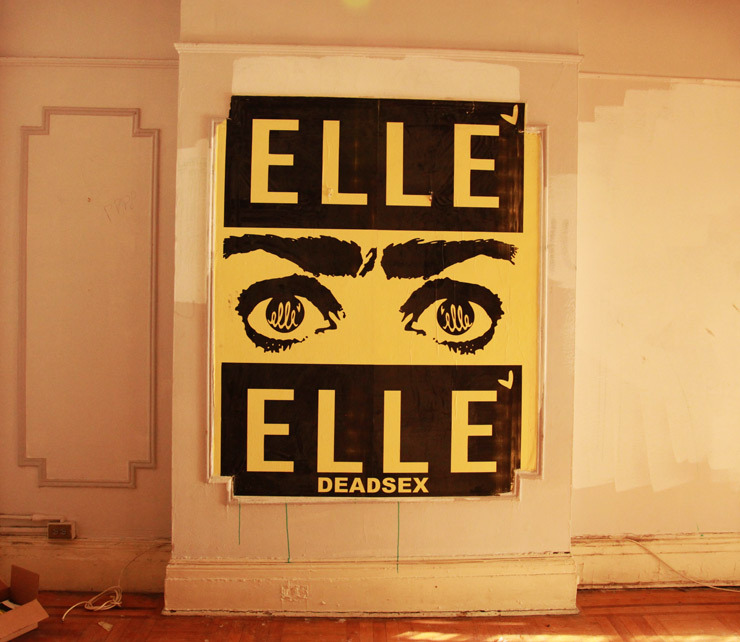 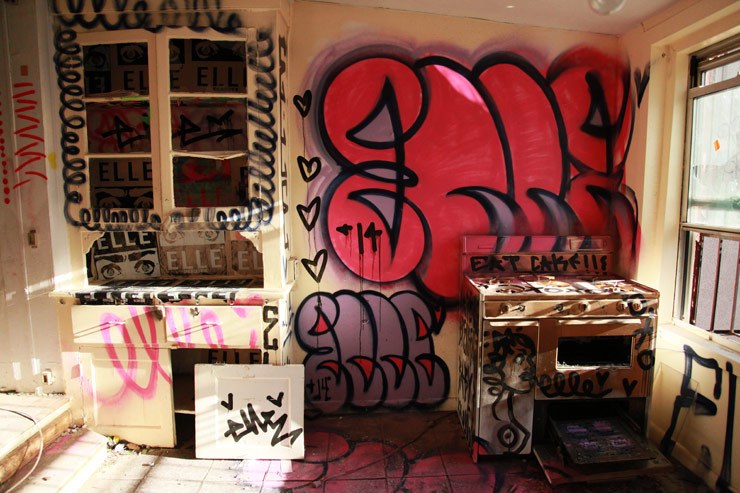 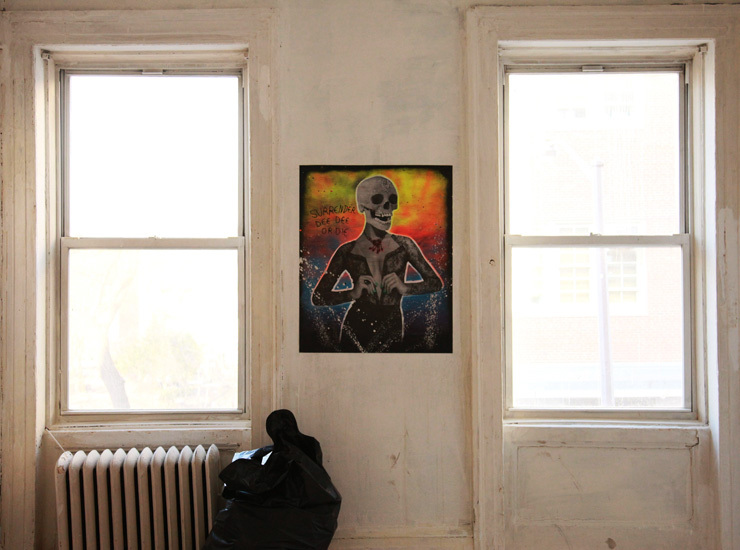 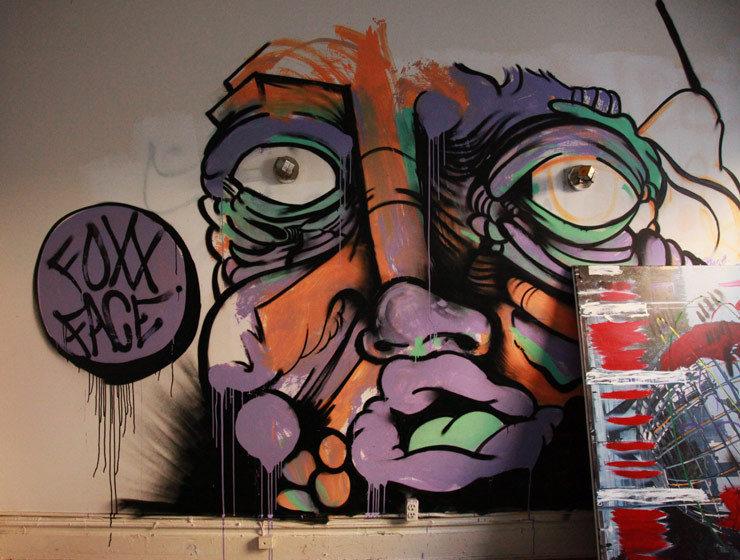 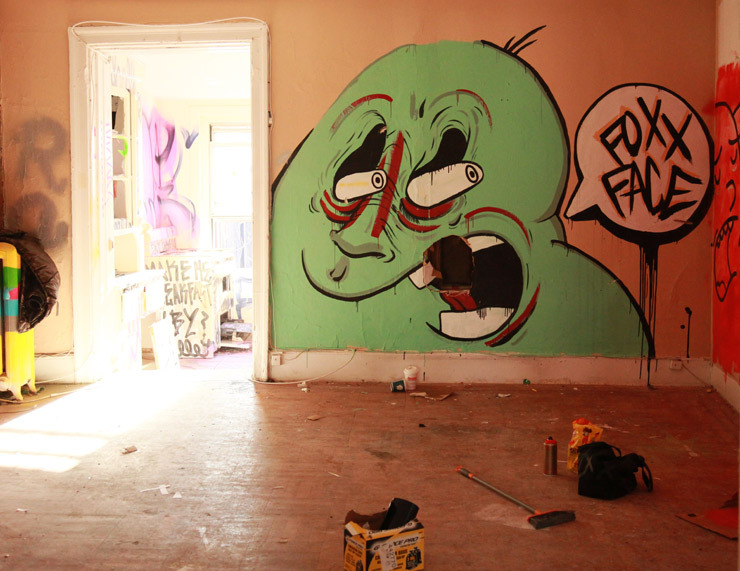 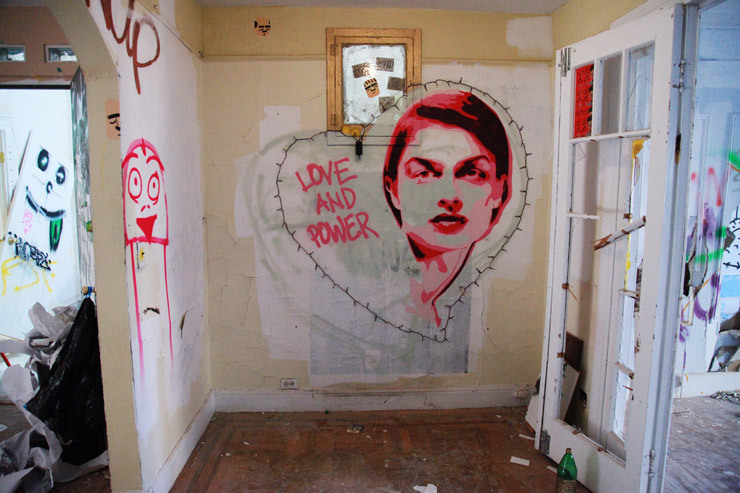 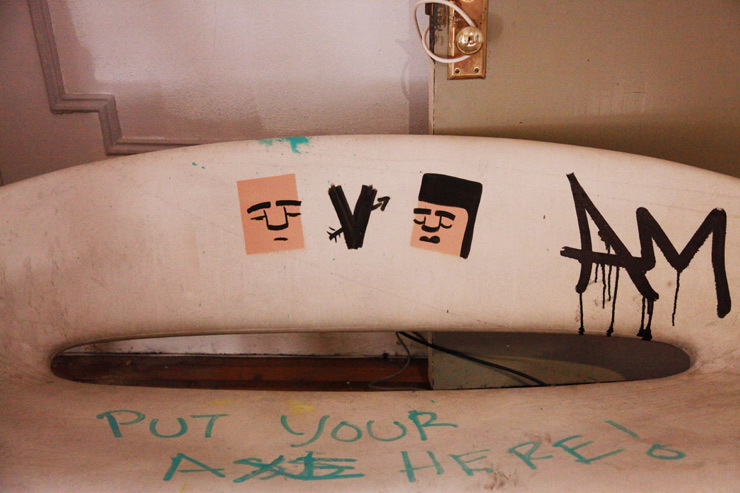 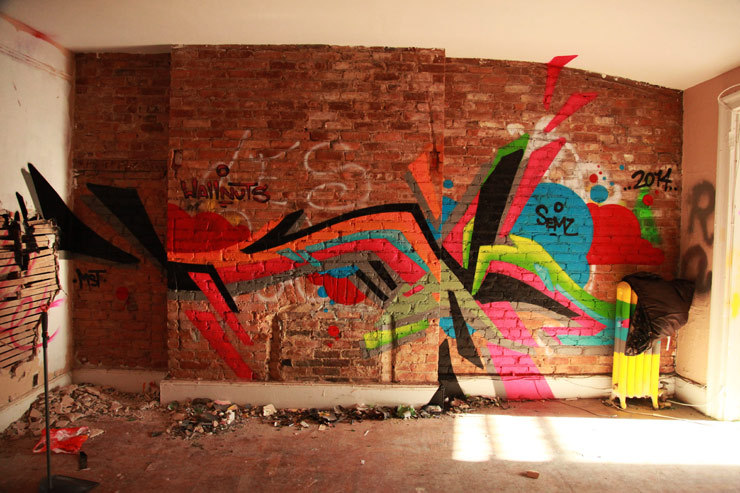 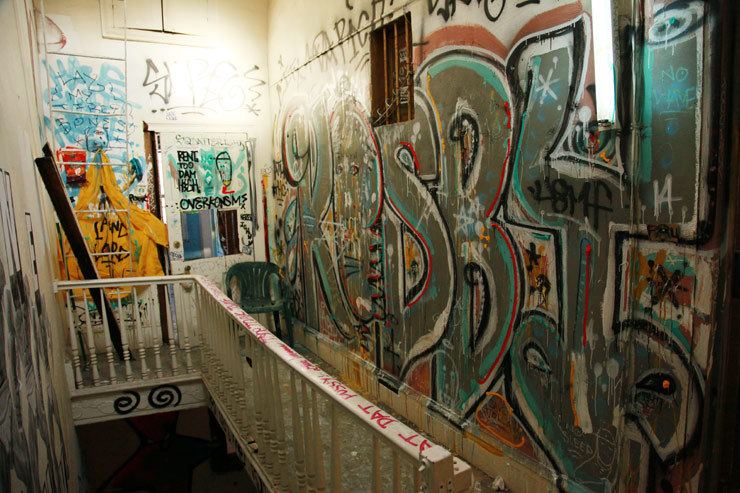 This show, "Surplus Candy" was organized by Hanksy, and is now closed.A near complete artist list includes: