Turns out there's way more to art than its aesthetic appeal. New research by Greek and German scientists suggests that some of the world's most celebrated landscape paintings may reveal information about pollution levels in Earth's past that could help them predict future climate change.

How exactly? The researchers say that the vivid colors seen in old paintings of sunsets show how much volcanic ash was in the planet's atmosphere following volcanic eruptions.

Check out these paintings of sunsets included in the research. (Story continues below.)

"We wanted to provide alternative ways of exploiting the environmental information in the past atmosphere in places where, and in centuries when, instrumental measurements were not available," lead researcher Dr. Christos Zerefos, a professor of atmospheric physics at the Academy of Athens, said in a written statement.

When volcanoes spew ash into the air or fine desert dust travels on the wind, tiny particles called aerosols become suspended in the atmosphere. These aerosols scatter sunlight so the sky appears reddish. Of course, the presence of air pollutants means less sunlight reaches the surface of the earth -- which can lead to cooler weather.

Indeed, Zerefos and his collaborators noticed that in the three years following the 1815 eruption of the Tambora volcano in Indonesia, landscapes by J.M.W. Turner and other European painters showed sunsets that were characteristically reddish or orangish. Following this eruption, Earth was plunged into a "volcanic winter" that reduced global temperatures by five degrees and brought snow to New England in June.

For their new study, published March 25 in the journal Atmospheric Chemistry and Physics, the researchers looked at the use of red and green pigments in 554 sunset paintings created by artists as far back as the 16th Century. Then they compared the ratios of red to green in the paintings with environmental data, including ice core samples and records about volcanic activity. Between 1500 and 2000, there were more than 50 big volcanic eruptions worldwide.

"We found that red-to-green ratios measured in the sunsets of paintings by great masters correlate well with the amount of volcanic aerosols in the atmosphere, regardless of the painters and of the school of painting," Zerefos said in the statement.

The paintings also revealed "an upward trend which points to the observed increase of aerosols in the past 100 years or so in the atmosphere," Zerefos added in an email to The Huffington Post.

To confirm their hunch that red-green ratios in paintings can provide rough estimates for the atmosphere's aerosol levels, the researchers asked Greek seascape painter Panayiotis Tetsis to paint the sunset on the Greek island of Hydra in June 2010 -- one painting at a time when a dust cloud was passing overhead and another after the cloud had passed. 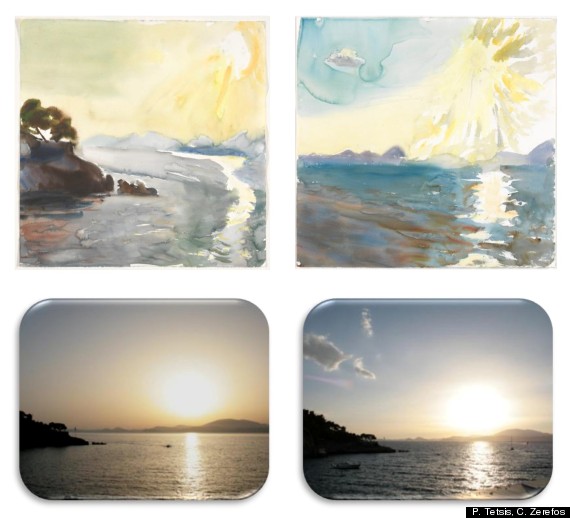 The top images shows P. Tetsis' sunset paintings in June 2010 during (left) and after (right) the passage of a Saharan dust cloud. The bottom images show digital camera photos of the same landscape.

Again, the researchers found that the red-green ratios in the two sunset paintings matched up with measurements of the amount of dust particles in the atmosphere.

These findings could help climate scientists gain a better understanding of how much pollution has been in the air and how it affected Earth's climate throughout history. Understanding Earth's atmospheric history may provide scientists with better estimates for how man-made aerosols will affect climate change today. 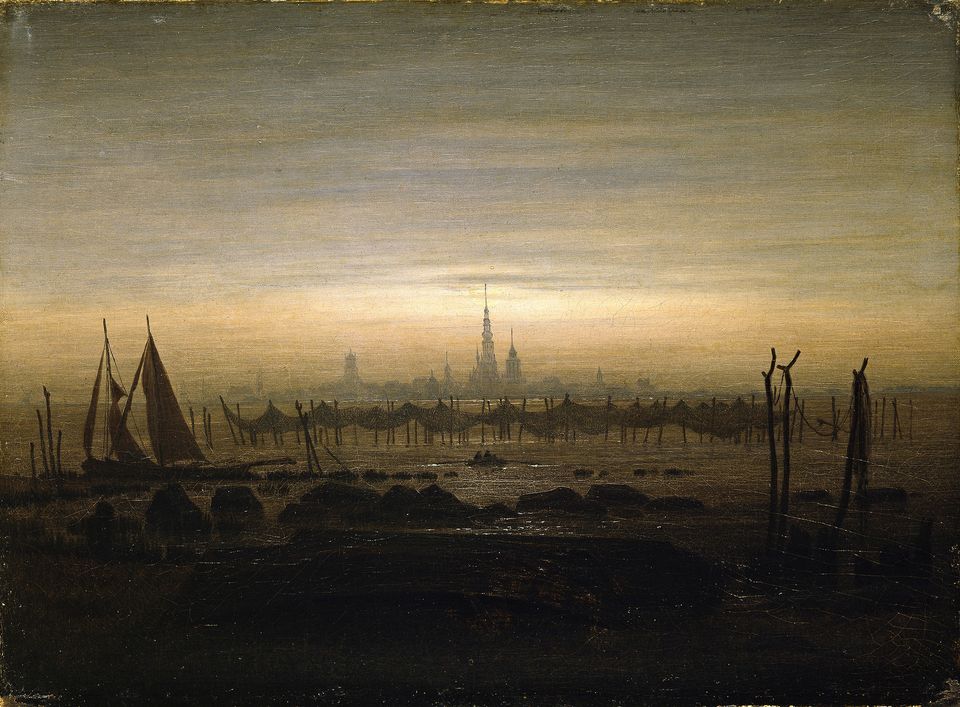