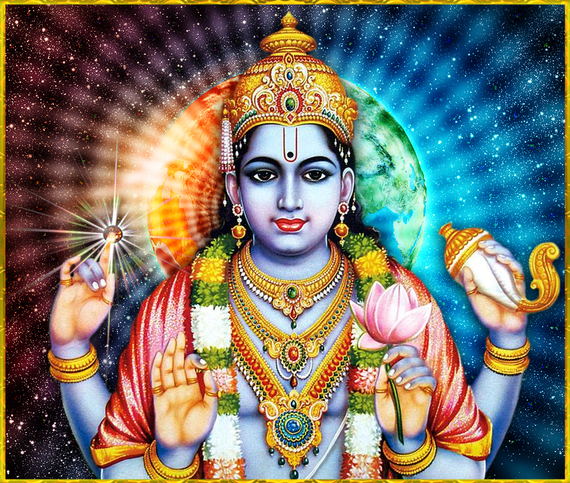 Though known as a Supreme Hindu god, Vishnu is a universal deity who sends his avatars to all nations, cultures, and races. Vishnu has appeared in many avatars, the most famous of which are Krishna and Rama. Buddha is an avatar of Vishnu, though controversy shadows this avatar. Some see Jesus too as an avatar of Vishnu. Over time, the Vishnu appearances are countless, but only a few recognized, fewer understood. Vishnu has appeared in the form of a fish, turtle, boar, half-lion, dwarf, and perfect man. Vishnu preserves the evolution of life on the planet. The avatar of Vishnu is dark-complexioned in India, as Jesus is portrayed to be white-complexioned in Europe and North America. Other avatars with varied complexions and facial features descend in other parts of the world. Vishnu himself is not attached to any one color or complexion.

Vishnu is meta-cosmic and meta-celestial being, boundless and illimitable. Some Vishnu manifestations are momentous and transformative, some momentary and illuminating. The avatars of Vishnu may appear as national leaders, as local heroes. In some appearances, the avatar of Vishnu is a celebrated prophet. The avatars share some or many traits of Vishnu. The avatars are not identical in form or substance. Nor are they equal to each other. Vishnu speaks all languages of the world, and all dialects. Vishnu blesses every phonetic of sound and every decibel of silence. However, each avatar speaks a distinct language or dialect. Each avatar is a cultural embodiment.

The etymology carries a little secret. The English word avatar is derived from autar, a Sanskrit word, which means to descend. Nazala in Arabic (which means to reveal) is related to uturna (climb down). Divine books, including the Gospels and Vedas, are the speech avatars of the divine word periodically revealed by the Supreme Being, known as God in English, Khuda in Persian, Elohim in Hebrew, Allah in Arabic, Dieu in French, and Dios in Spanish. These names are the philological avatars of the Supreme Being. These differing names do not change the reality of the Supreme Being, which is one and the same.

Periodically, Vishnu descends or reveals himself to human beings as an avatar whose outward appearance matches with that of a human being. In essence, always, the avatar carries the consciousness of Vishnu. The avatar is not Vishnu but a manifestation of Vishnu. The avatar of Vishnu lives, walks, eats, talks, marries, and dies because the material avatar is subject to the laws of nature as are all material forms of life. The avatar follows the logic of the material form but does not carry the consciousness of the form. This is what distinguishes human being from the avatar.

The human being is afraid of death and seeks physical longevity and even immortality but the avatar of Vishnu has no fear of extinction or aspiration for immortality. A human being goes through a process of physical and mental evolution and degeneration, with ever changing consciousness, memory, and perspective. The avatar of Vishnu experiences no such evolution in consciousness, memory, or perspective because the avatar is already supplied with perfect divine consciousness that the avatar may reveal only selectively.

The avatars of Vishnu do not seek hermitage or seclusion. They are not monks or mendicants. They live in human communities. They establish households much like ordinary human beings. They fall in love, frequently more than once. They strive for peace and may fight wars to preserve the community and its dharma against evil and oppression. By participating in communal life, the avatars of Vishnu assert no ego, carry no personal agenda, and harbor no lust for power or wealth -- and that is another key element that distinguishes avatars from human beings who seek communal life, and some wish to lead nations and communities, almost always propelled by personal desires. The ego separates the avatar from the human being. The avatars act without ego and have no ego while human beings act out of ego and cannot exist without ego.

Vishnu needs no ornamentation but the avatars adore cosmetics. Fine clothes, jewelry, and perfumes are the embellishments of the avatars that see beauty as both natural and cosmetic. Cosmetic beauty is as alluring to them as natural beauty, sometimes more. The avatars of Vishnu use surmah, kajil, surkhi, powder, hair color, mascara, garlands, necklaces, bracelets, watches, diamonds, pearls, stones, this and that, whatever enhances the splendor of fingers, ears, eyes, cheeks, and lips.

All avatars descend but only some reveal themselves. Those who reveal themselves may be rejected, tortured, or killed. The human species will be gradually misguided toward self-annihilation if and when Vishnu decides to send no more avatars to illuminate dharma and reaffirm distinctions between good and bad.