One afternoon last month a man fell out of a dilapidated taxi near Monrovia. He seemed unwell and confused. Two young men nearby ran to the man, picked him up and put him back into the car. The taxi drove away, and the young men disappeared into the crowded streets of Red Light, a neighborhood in greater Monrovia.

The story doesn't end there -- there's a gang, police, a bloody brawl and hesitant informants hiding from investigators -- things you'd expect to find in a detective show. Global Communities has been heavily involved in contact tracing as part of our extensive Ebola response in Liberia. We track individuals' movements, question their families and monitor suspected cases. And while a suspected Ebola case is a victim of a tragic disease, not a suspect in a crime, the process of putting the story together is often similar. In this case, the two coincided. 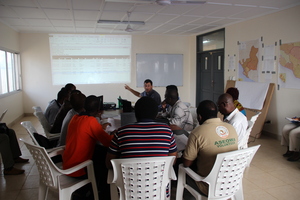 Global Communities serves as coordinator for Sector 4 of the greater Monrovia area as part of the Montserrado County Ebola Prevention and Response program, led by the International Rescue Committee and funded by USAID. The hub serves as a base for case investigation, contact tracing and active case search, important practices that identify, document and track at-risk populations. Coordinated by a Ministry of Health representative and staffed by several Ebola response organizations, the Sector 4 team meets at the hub daily to share information and plan activities.

In this specific case, in less than 48 hours from Ebola confirmation, the Sector 4 team identified more than 100 total contacts and pieced together a more complete story of the their movements and symptom development. Next the team worked to monitor existing contacts and search for more, while also providing food to the quarantined, and disinfecting potentially infected homes and public spaces. They kept a close watch for anyone who developed a fever or otherwise became symptomatic. Ambulances were on call, and suspected cases were immediately isolated at an Ebola Treatment Unit (ETU).

This was a complex and exceptionally challenging case of contact-tracing. So what actually happened? It all began when the team got a call from an NGO worker alerting them of a confirmed case from Sector 4. A man named Eric -- believed to be one of the helpers from the taxi incident -- had died in Red Light, and his death was being investigated as a homicide. His post-mortem swab confirmed positive for Ebola. At that point our team activated contact tracers to identify individuals who had come in contact with Eric. That same night, the team learned of another man, Steven, who was admitted to an ETU and who was suspected to be the other person who helped the sick man back into the taxi. 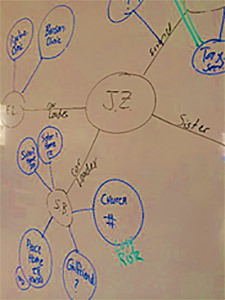 The next morning the Sector 4 team mapped out what they knew so far -- that the Ebola-positive men were identified as members of a local gang. Eric died without being treated for Ebola and had been in a bloody brawl a few days earlier while he was symptomatic. With this information, the number of potential high-risk contacts increased dramatically. Furthermore, we knew since they were gang members that they would be difficult to track. The man at the ETU, Steven, was a confirmed friend and associate of Eric, so contact tracers worked with him to identify more of his contacts.

Next our tracers met with police to track Eric's movements before he died, and concluded that some 40 gang associates were at risk. Tracers headed to the neighborhood frequented by the gang to make contact with them. Using a community engagement approach that worked else-where with sensitive communities, the team emphasized the risk they faced and offered food, mattresses and other items, provided the suspected contacts complied with quarantine.

Contact tracers also visited clinics where Eric went after the fight to seek treatment. And while the man who assaulted Eric was identified, he was still at large. Then the team learned that Steven, still alive at the ETU, had even more potential contacts since he attended church before he was admitted. Soon after, a team met with the pastor to assess risk and to disinfect the church, and others created a potential list of contacts from the clinics where Eric was treated. The team also dispatched a psychosocial support supervisor to visit resistant contacts and persuade them to be tested and protect themselves. And they briefed the local mayor to ensure that Global Communities efforts complemented various government outreach happening at the time.

This extraordinary tale illustrates just one of the rapid, effective responses our team has led, with great success. While infection rates are reducing, the approach used by the team serves as a great example for Liberia and other countries suffering from Ebola of boots-on-the-ground, community-based, intelligent ways to contain the current Ebola crisis and prevent further cases in the future. My thanks to my Global Communities colleagues Josh Balser and his Sector 4 team, and Alice Urban for their work in following and reporting this story.