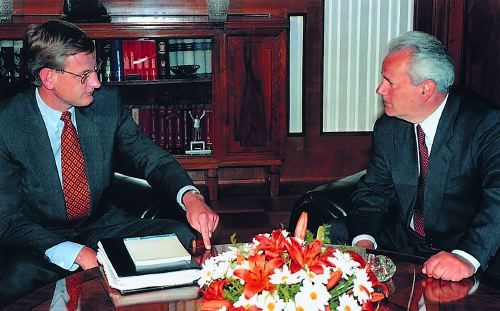 As nationalism may seduce the masses, so may vanity have the same effect upon individual diplomats engaged in conflict resolution. While some may debate what strategic interests, conspiracies or prejudices are at play in motivating policy, too frequently it may be the egos of the personalities involved. During the conflict(s) in the former Yugoslavia, and particularly Bosnia & Herzegovina, "BiH", some presumed mediators too frequently wandered in more as eager "players" in a single's bar, and Slobodan Milosevic knew how to make himself appear as the most desirable partner. It is perhaps a lesson and tactic learned by Bashar Assad, Vladimir Putin and other despots from Myanmar to the Horn of Africa, and a failure of today's as well as yesterday's diplomacy.

Milosevic, the "strongman of Serbia," was being projected as the face of a new Yugoslavia as Communism was collapsing in Europe. However, his nationalist rhetoric and demands for effective supremacy with respect to the other republics in the Yugoslav union including Slovenia, Croatia, Macedonia as well as BiH were at least in part bringing about the disintegration of that Yugoslavia. In order to perpetuate his hold on power, he had undergone a quick costume change on stage from communist to nationalist. By early 1992, he had armed and set loose both regular and para-military forces upon BiH in an effort to carve out a "Greater Serbia" from lands torn away from neighbors (including Croatia) via ethnic cleansing/genocide. By UN Security Council Resolution, Milosevic's Belgrade was ordered to withdraw its military from BiH, but in fact the killings and ethnic cleansing were perpetuated, even intensified.

Rather than confront Milosevic, many among the big powers as well as the UN, sought to suppress the evidence of the war crimes and other grave violations of international humanitarian law. Once the information began to leak out of the mass killings and concentration camps in the summer of 1992 primarily from courageous international reporters (as Roy Gutman, Ed Vulliamy and others) but also from sources within the UN (UNPROFOR) who provided our UN Embassy with "confidential" direct evidence of first hand reports and the implicit cover-up, (see my statements in 1992 via The Washington Post ("UN Knew of Serb Camps a Month Ago, Bosnian Says,") the outcry for intervention was mounting. 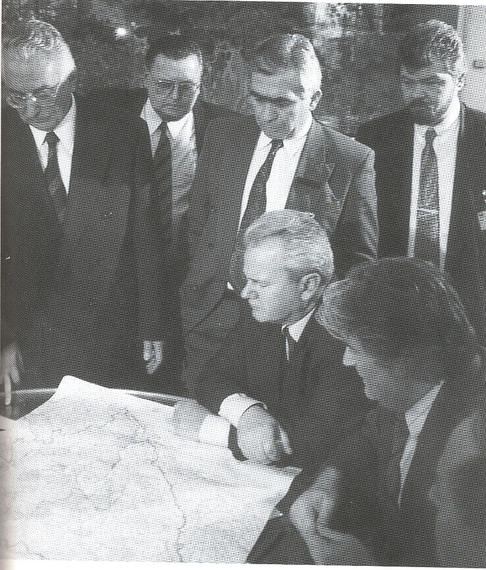 The call for intervention in BiH though was dampened by a sudden call for what would become a protracted series of "peace conferences" or more accurately dalliances with Milosevic. As I learned several years later, then French President Francois Mitterrand, (who spoke of the Bosnian Muslims as outsiders in Europe even if they were the indigenous population), called then UK Prime Minister John Major by phone, (who apparently was fishing in Scotland), and asked him to urgently convene a conference in London with the express purpose of dampening calls for US/European/NATO intervention. The so-called "London Conference," was pulled together in a couple of weeks at the end of August 1992. It is largely buried in history as such flops generally are if they evidence a narrative contrary to the big powers that launch them. However, at the time it ballooned into a grand event but in the end it was more a coming out ball for Milosevic.

Then Prime Minister Milan Panic sought to impress upon the Conference that he was the true leader of what remained of "rump-Yugoslavia," but Milosevic played the coquettish role to perfection. Rather than seek to sideline Milosevic, global leaders waited their turn for a private dance with him in the many adjoining chambers of the Conference center. The London Conference concluded with many promises, and if kept would have delivered not only an earlier more true peace but also saved lives. Of course, from the outset, Milosevic had no intention of keeping to his vows of chastity in ending the aggression upon BiH.

Milosevic, largely successfully, projected himself as the man in charge but also free of the excesses of nationalism and the crimes committed in its name. The reality of his two-timing though was obvious to any who would bother to look beyond the rendezvous' with the despot. Milosevic's Belgrade controlled the military and logistics that fueled the sieges and killing in BiH. Further, when speaking in Serbian to the domestic audience he was the convincing ultra-nationalist, instigator and opportunist.

What made Milosevic the great partner in talks was his willingness to apparently listen, and particularly feed the craving of his diplomatic guests to be seen as fitting partners, as well as international recognition and honors. To enhance the perceived difficulty of the task, the mediators frequently collaborated in the narrative of "age-old hatreds," and thus giving credence to the claims and legitimacy of the most brutal as well as ultra-nationalistic.

As host, Milosevic became known for long sessions of generous servings of drink and conversation and all making the partners in such feel equal in rank and role to not only the leader of Serbia but one perceived as the key player in the region. Of course, a clever mediator might employ the same appeal to the vanity of some absolute ruler or war lord to gain their ear in the start of talks. However, it was Milosevic who had them coming back to him, as much to satisfy their own lust for vanity, in a series of one-night stands.

Each left with little of substance to show but feeling that the next trip would finally deliver Milosevic's signature and heart - just one more rendezvous. It continued like this for years, before, and after Dayton at the end of 1995. Elle King's hit song, "Ex's and Oh's," two decades later becomes a fitting metaphor. 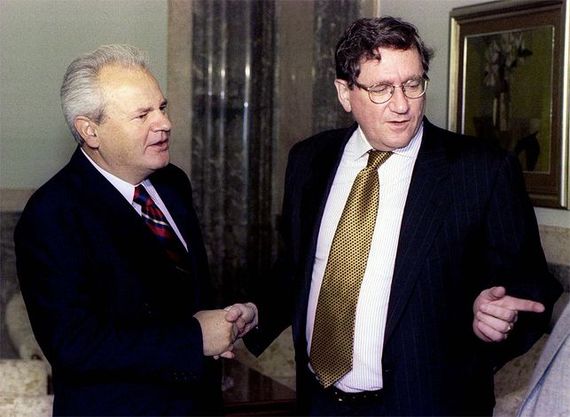 During the negotiations leading up to and during the Dayton Conference, Milosevic's hold over the gathered real and wanna-be mediators frequently played them off against each other. His demands undermined not only shared American/European values but also Euro-Atlantic strategic interests. A few years later Ambassador Richard Holbrooke would acknowledge that granting Milosevic's demand for "Republika Srpska" was a defining mistake. Even though the final stage of the talks was being held in a US Air Force base in Dayton, Ohio (Wright Brothers AFB), Milosevic still defined the game and the nature of the desired peace, based on ethnic/nationalist delineation. Milosevic's seductive appeal made his poker hand look stronger than it was, and as one US official stated, "we could not afford to call his bluff."

During the serial peace talks that meandered from Geneva, New York, Brussels, Ankara, Bonn, etc. from 1992 to 1995, frequently I was in the room, if not always seated at the table. While most others talked of plans and maps, Milosevic spoke flattery and wounded feelings. However, he was at his best in small, more intimate settings. The Dayton talks frequently dissolved into non-formal sessions. On a couple of occasions, Milosevic asked me to "have a drink with him" or "if I did not drink alcohol, to share a cup of coffee." I must admit that I was flattered, but not seduced. I diplomatically rejected. I saw Milosevic not necessarily as the true believer, but as the master manipulator who had turned Serbian nationalism into something beyond national pride and into an ethnic cleansing and killing machine. You just don't jump into bed, regardless of how appealing the flattery and opportunity to be seen as even more desirable.

Milosevic's success is frequently associated with the final Dayton Accords. I resigned as BiH's Foreign Minister toward the end of the talks seeing the steady erosion, prostitution to Milosevic's demands, of the future of a lasting peace and functional country. Compromise is not a bad word but Dayton left both peace and the future in great doubt, compromised if not conceded. The destabilizing effect is still rolling through and beyond the region and Europe. Milosevic's greatest trick in Dayton though may have been in convincing some in Washington and Europe that he was one of the pillars in the future of SE Europe. The Serbian opposition was thus undermined and the opportunity for true change evaporated. Ultimately, the illusion of Milosevic was washed away, when two key US players who were not under his spell, Madeleine Albright, now as Secretary of State, and General Wes Clark, as NATO Supreme Commander, called his bluff in Kosovo. For Serbia this was an even bigger loss with not only Kosovo but Montenegro gone. Unfortunately though, the epidemic of nationalist conflict and politics that might have been in recession has now gained new legitimacy and currency, from Moscow and Ukraine to Assad, ISIS, and Syria. (See: "Construction According to Putin's Model, from Bosnia to Europe?")

The Dayton Accords also did end a war, and open societies as well as democracy have a more nurturing environment in peace as compared to the evils that are fertilized by conflict. It is a worthy lesson particularly for Syria, but diplomacy is not mere words and requires ongoing engagement, before and after the signatures. (See: "Reckless Diplomacy Disguised as Caution Cost Lives in Srebrenica, & It's Happening Again, this Time in Syria.)" BiH is now a weakened state and still needs help in becoming a comprehensive partner in the Euro-Atlantic family. However, in facing today's challenges, from ISIS to Putin's resurgent imperial ambitions robed in various fashions of nationalism, does the US and Europe need BiH even more? (Read: "Can Bosnia's Army Save the World?")

Charisma is a defining attribute for politicians, and former President Bill Clinton is one leader whose interaction was as effective as any that I have witnessed - I don't mind admitting that his generous comments in his book and direct engagement with me did flatter my ego. I remain thankful but not necessarily spellbound. Seeking the truths about the betrayal of Srebrenica remains an unshaken desire. Moreover, Bosnians & Herzegovinians still look to Bill Clinton to help revive the vision and return to Euro-Atlantic values. (See: "Will Bill Clinton Apologize in Srebrenica?")

The broader lessons go beyond, from peacemaking efforts by UN-mandated efforts, to emissaries deployed by key capitals. Diplomacy is desirable, but it can also become subverted by vanity, personal ambitions and seductive despots. Capable diplomats sent in to confront clever despots could turn out to be akin to sending the nerdy scholar into a rave party. Presumed intermediaries seeking a Nobel Peace Prize or exploiting mediation for some ambition for political office or greater recognition can be as damaging as outright recognition of the failure of at least this round of engagement. The greatest challenges may come from within and particularly recognizing when you are being played. There is an old poker axiom: "If looking around the table and you cannot recognize the sucker, then it is you!"