Florence and the Machine closed the Shaky Knees Music Festival in Atlanta's Centennial Olympic Park May 15 with an energetic 90-minute set following a weekend lineup of new and retro rock acts such as Huey Lewis and the News, My Morning Jacket, Foals, The Kills, the Head and the Heart and Bloc Party. Now in its fourth year, Shaky Knees is making its way to the map alongside similarly successful city music fests in New York, Chicago and Austin. The three-day, no-camping festival has few qualms about catering to the alternative rock crowd and forgoing the multi-genre approach of its Tennessee neighbor, Bonnaroo. This type of focused approach can wear on older fans (who can tell so many boy-with-a-beard bands apart?), but at least the event has grown its sea legs in a fantastic downtown ATL setting (yay for food trucks, clean paved paths, blankets on the grass and easy access to transportation). Best of all, Shaky Knees is homegrown and doesn't feel like a corporate package deal (stay gold, Ponyboy). Below, highlights from this year's festivities:

Watching Florence Scale the Soundboard
Dressed in an ethereal lemon-yellow dress, singer Florence Welch glowed like a firefly inside a constant puff of stage fog, bringing fairy-tale drama to "What Kind Of Man," "Queen Of Peace" and "Delilah," from her band's 2015 album, How Big How Blue How Beautiful. (These songs also appear on The Odyssey, a long form music video project with director Vincent Haycock, which premiered in April). Her signature moves - twirling and fearless climbing - began with a frantic bolt through the audience to the mixing tent, where she scaled a lighting scaffold during the song, "Rabbit Heart." (Photo below: Florence as Tinkerbell!) No one was injured (Welch broke her foot during a 2015 Coachella slot), but the excitement generated by the singer's moves and durable vocals entranced tens of thousands of concertgoers as a crescent moon rose over the onetime site of the 1996 Summer Olympics. Hot spot: "Ship to Wreck" 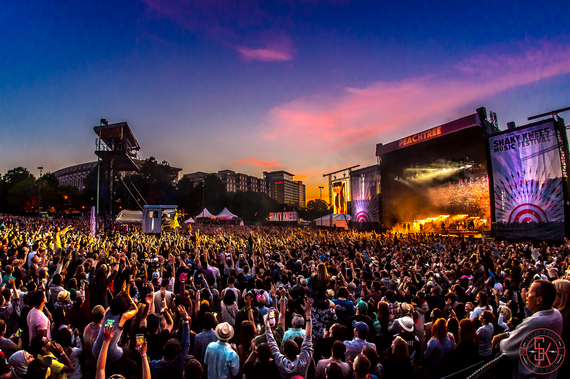 Experiencing the Multigenerational Awesomeness of Huey Lewis and the News
Before the show, Lewis held a press roundtable where he told amazing stories from his almost 40 years in the business. On stage, he wowed Millennials and GenXers alike: "Huey Lewis and the News delivered exactly as advertised - the band's iconic Sports album in its original order," says attendee Stephen Michael Brown. "Huey even referenced where you turn the vinyl record over! The band brought its winning energy and hits, did one recent song and also the fan favorite, 'The Power of Love.' These guys were a perfect addition to an outdoor festival day for new and old fans alike!" Hot spot: "I Want a New Drug"

Getting our Bama on with St. Paul and The Broken Bones
Following a 2015 stadium appearance in Atlanta as opener for the Rolling Stones, St. Paul and the Broken Bones took the stage at Shaky Knees and held their own as the true heavyweights they are becoming. Horns, funk, and wallowing in the aisles between throngs of music fans in the spring sunshine seems perfectly natural to Southerners (and yes, there was plenty of BBQ sold at the festival that day, too). Hot spot: The Beatles' "I Want You (She's So Heavy)"

Taking the Kids to See The 1975
It was a misstep to place devil-metal band Ghost on the bill directly before The 1975's pop slot, considering the huge crowd of moms and their clean-cut teenagers who had gathered to hear easy hits such as "Love Me." Still, attendee Leigh Halsema said the English band was worth waiting for. "The 1975 restored my faith in young, hot bands," she says. "The music, the stage show, the performances were all fantastic!" Her daughter agreed: "The 1975 was so surreal because of Matty Healy, the lights and music. It was everything I wished it to be!" Hot spot: "Change of Heart"

Admiring Young the Giant's Wardrobe
Sameer Gadhia's voice won me over when I first heard Young the Giant's 2014 hit song, "Mind Over Matter," and it was great to experience that one, along with the now-classic "Cough Syrup" in their Shaky Knees set. This band brings the perfect mix of heat, experimentalism and melodic craft to their recordings, and I'm looking forward to their continued growth as a band (more anthems!). On this day, I was super happy to see rhinestones, sequins, flowers and a red coat hit the stage. Thank God for stage presence. Hot spot: "My Body"

Headbanging with Dave Navarro and Perry Farrell
Classic alternative hit the main stage on day one with original members of Jane's Addiction playing to a packed field under the skyline. The sexy boy toy dancers reportedly seemed out of place in a 2016 world where Beyonce's brand of feminism rules, but most fans just wanted to rock, old-school. "Watching Perry and Dave power through Ritual de lo Habitual was like time traveling to 1990," Michele Bolgla says of the set. "The band gave it their all. And once again this year, the folks at Shaky Knees did an amazing job with lighting and effects!" Hot spot: "Stop" 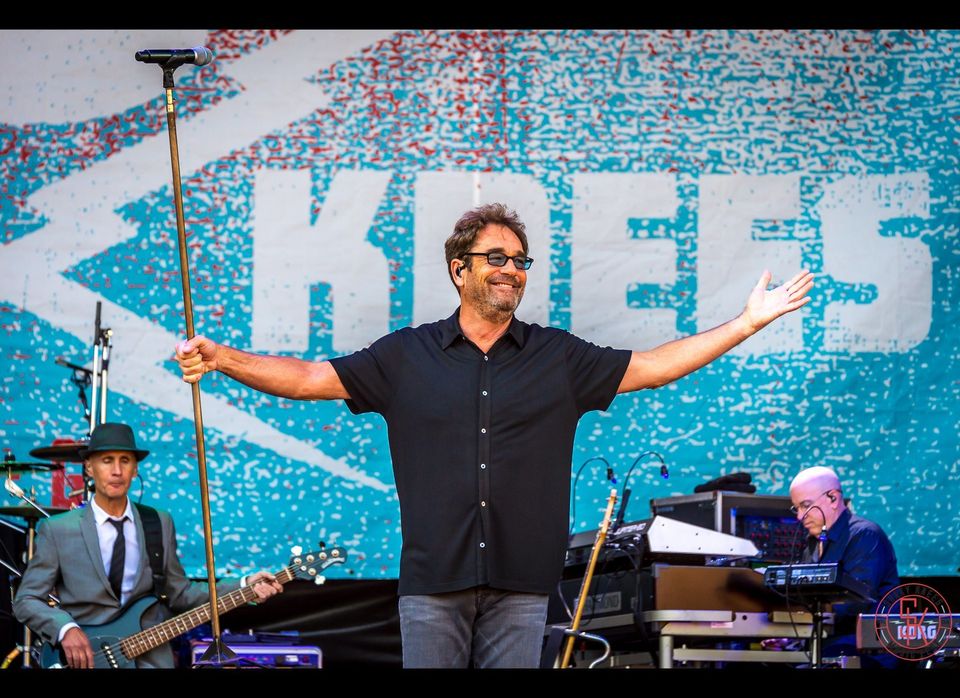