I have often wished that religious leaders who promote the belief that homosexuality is a sin could spend a day at the Ali Forney Center, the nation's largest organization providing housing and care to homeless LGBT youths. Meeting our youths, looking into their hurt eyes, hearing how their young lives were devastated by their parents' rejection, would speak volumes about the real sin we are dealing with: the homophobia that destroys the bond between parent and child. I wish I could wake them up to the reality of what they are doing; that promoting the rejection of homosexuality recklessly endangers LGBT youths.

I've tried. I've invited my bishop, Cardinal Dolan, and the leader of my church, Pope Francis, to come to the Ali Forney Center, and see for themselves how so many of our youths were forced into homelessness by religion-based bigotry. So far, without success.

Now I'm trying another approach. If the church leaders won't listen to our youths, I'm hoping that people of faith might. I'm grateful to Faith In America, and the video production unit of the New York Times for creating this profound video, Not A Sin, where some of our youths tell of the abuse and abandonment that they have suffered, just for being who they are. It is not easy to witness such pain, but their voices deserve to be heard.

We see the teaching that homosexuality is sinful harming LGBT youths by destroying their bond with too many parents who give credence to such an idea. A recent study of family rejection of LGBT youths found that parents who identify as strongly religious are significantly more likely to reject their LGBT children. At the Ali Forney Center we find that the homeless youths who come to us for help cite their parents' religious beliefs as the most common reason they were not safe in their homes.

We also see these teachings as psychologically destructive for LGBT youths. In our mental health clinic we treat many youths who have been traumatized by the conflict they endure as their sexual and gender identities emerge in an environment where they are condemned as being against God. Too many of these youths consequently suffer from depression, begin to abuse drugs and alcohol, and even become suicidal. It is hard to witness the damage caused to youths when matters as intimate to their core identity as how they seek love and human connectedness, as well as how they experience gender, are attacked as being evil.

As a Roman Catholic, I am particularly horrified by the homophobic expressions of our Catechism, which is the mechanism by which the teachings of the Church are conveyed. It's stance towards homosexual persons makes no sense. While it indicates that homosexual persons "must be accepted with respect, compassion, and sensitivity," its's stance towards "homosexual acts" utterly contradicts this with categorical condemnation that is anything but respectful or compassionate. The Catechism describes homosexual acts as being a "grave depravity," as being "intrinsically disordered," as being against the law of nature, and "under no circumstances can they be approved."

I hope our video can wake up the moral consciousness of more of my fellow Catholics to the recklessness and harmfulness of such a stance. This condemnation of "homosexual acts" contradicts the science of human sexuality, which has long come to recognize that homosexuality is a natural and healthy part of the spectrum of human sexuality. But to Catholics, it should be even more important to recognize that such homophobia, by causing immense harm to many LGBT youths, grossly contradicts the message of Jesus Christ in the Gospels. Jesus is not recorded as having said anything against homosexuals or our acts. However, he was fierce in demanding that children be protected. Jesus said that it was better for a person to have a millstone fastened to their neck and thrown into the depths of the sea than that they should harm a child. (Luke 17:2) 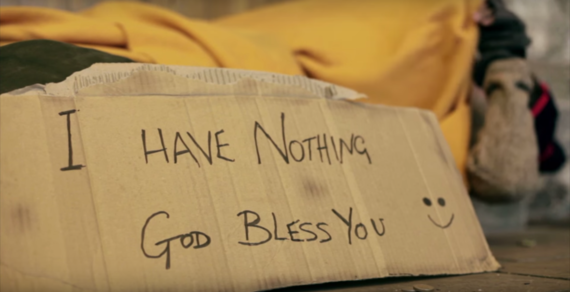 I hope that this video will raise urgent moral questions for us Catholics. How do we stop being complicit in the harm to innumerable LGBT youths done by the teachings of our Church? How do we create an environment in our parishes and our schools that help parents love and accept their LGBT children? How do we protect children from being harmed by homophobic teachings in churches, schools, religious education programs?

Please consider signing this petition from Faith In America, calling for a change in church teachings regarding homosexuality.

God is love. All God's children are precious in his eyes. Let us protect his LGBT children from the terrible harm evidenced in this painful video.

To learn more about the Ali Forney Center, click here.