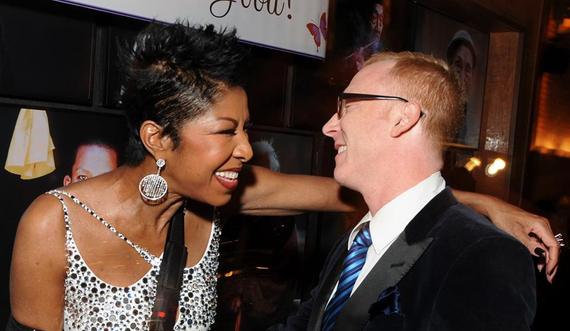 In the early morning hours of New Year's Day 2005, three years into our friendship, I enjoyed one of the most intimate and spontaneous performances ever given by Natalie Cole. It consisted of a single song sung barely above a whisper to an audience of one: me.

We were in Aspen, Colorado at a swanky party at the peak of Ajax Mountain. Leaving together, we stepped outside, first into a blast of cold air and a windy swirl of snow, then into a gondola that would transport us down the side of the mountain and back to earth. The cozy pod lifted us off into the sky and soon our visibility was obscured by the feathery blanket of white.

Moments later, the motor suddenly stopped. She and I hung suspended high above the ground as the wind rocked our car from side to side as though it were a child's bassinet. We suddenly occupied an imaginary world that was like a snow globe: surreal but strangely peaceful. We weren't afraid. Then Natalie reached for my hand, put her head on my shoulder, and proceeded to sing Randy Newman's "I Think it's Going to Rain Today" in its entirety.

"Bright before me the signs implore me
To help the needy and show them the way..."

Flash forward to the early morning hours of New Year's Day 2016, when I heard the news that Natalie had died. Such was the power of her life force that although I had watched her battle an almost absurd number of health setbacks in recent years, it never consciously occurred to me that she wouldn't bounce back. The friendship we shared for 12 years was without precedent in my life, rooted in a shared passion for music. Outside of her beloved family and her faith, which was so strong, nothing made Natalie happier than to find a new song, to make an old song new, or to talk about the art of singing.

As both a bridge back to her father Nat King Cole's generation as well as a peerless artist in her own right, Natalie crossed racial, genre, and generational lines. She seemed to have a story or insight into almost any musician or song you could name. Our favorite thing to do together was to stay up late watching YouTube videos of artists new and old. We compared notes and shared ideas. From Frank Sinatra to Bruno Mars, Pearl Bailey to Adele, she offered perspective with the enthusiasm of a student, the knowledge of a teacher, and the wonderment of a child.

To the world she was Natalie Cole, but to her friends and family, she was just "Sweetie." Toward her peers she was supportive and effusive, radiating the warmth and admiration of a savvy fangirl about female vocalists we all know by their first names: Anita, Gladys, Patti, Dionne, Diana, Barbra, Whitney, Bette, Chaka, Mariah, Donna, and, of course, Aretha, (whose wholehearted approbation after Natalie's death would have been deeply meaningful to her.)

Most of them were true friends whose work she championed. She was less generous to vocalists who didn't have real chops or who relied on Auto-tune or histrionics. "What is with these kids?" she would say. "You riff to make a musical point, it should never be the point, because that ain't sayin' nothin except 'look at me!'" Then she'd break into a huge laugh, filling the room with warmth.

Natalie was the most egalitarian person I ever met. It was not uncommon for her to attend a socialite's luncheon in Beverly Hills and then scoop me up to go buy monkey bread off the back porch of some old woman in East L.A. She enjoyed the finer things in life but felt right at home in the hood. Perhaps she felt protected by the goodwill she felt wherever she went and by her incredibly diverse group of friends. She was loyal.

When the music business -- in which I had toiled for years -- imploded in the 2000s and I was scrambling to reinvent myself as a writer, Natalie was one of a small handful of industry friends whose support never wavered. Though she was in many ways American musical royalty, she was always real. Descriptions of Natalie typically include the word "class."

Her approach to her craft combined the concentration and organizational skills of an academic with the improvisational abilities of the great jazz vocalist that she was. Her skills were layered and complex: musician, teacher, historian, shaman, therapist, minister. These qualities were all evident on the night when Natalie and Chaka Khan recorded a duet of "(If You Can't Sing It) You'll Have to Swing It (Mr. Paganini)" for an Ella Fitzgerald tribute album. I watched with astonishment as Natalie, who of course had known the song forever, taught it to Chaka, who had not.

For two hours, Natalie went over the melody line with Chaka, whose process was more instinctive. Natalie sang "the concert was over in Carnegie Hall, the maestro took bow after bow" and Chaka sang it back, Natalie patiently making adjustments and offering encouragement until each note was right. I knew I was watching greatness as Natalie slowly and lovingly worked with her musical sister to create shape, form and color. By the time of the recording, the partnering was electric.

The first time Natalie and I had ever met was at the Warner Music Group afterparty at the 1992 Grammy Awards, when her album Unforgettable...With Lovehad won a number of trophies. I was working for Time Warner Chairmen Steve Ross and Jerry Levin, and it was Mr. Levin who introduced me to Natalie in the restaurants underneath Rockefeller Center. I can still recall Natalie standing in the center of the room, regal but approachable, the calm eye in a swarm of well-wishers.

Our meeting was brief. We bonded a few years later at the bridal shower for Liza Minnelli's wedding to David Gest. I felt lucky to hear Natalie and Donna Summer sing duets for Liza. From then on, Natalie and I shared no end of memorable moments. I was there at the Vegas show when Natalie, in the middle of her top-ten hit "Pink Cadillac," fell on her ass and literally bounced right back up like she was on a trampoline, finishing the song without missing a word. We laughed about that for years.

In 2009, she invited me to the Hollywood Bowl for the first concert she gave after her kidney transplant. Natalie swept onto the stage in a flowing purple gown and proceeded to give one of her most powerful and emotionally charged performances. A fan would scream, "I love you Natalie," and she would smile and say, "I love you more!"

Our relationship was also professional. After 20 years of striving to get somewhere in the record business, I finally got a break, from Natalie. For years she had focused on making fine orchestral albums of standards; I had suggested she return to her R&B roots by recording an intimate, classic soul CD with a small group of sidemen and simple production. In 2005, she and I were joint executive producers of her Verve album Leavin'. 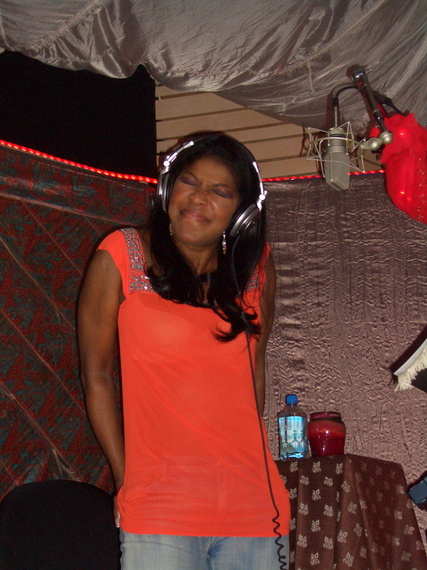 Natalie recording "Leavin'" in 2005. Her work ethic, sense of play, and far-reaching skill made her an absolute joy in the studio. Working with her was like taking a master class in singing. Photo by David Munk.

The sessions were held in Atlanta. The repertoire was eclectic. She reinvented Sting's "If I Ever Lose My Faith in You" as a mediation on her religious beliefs, creatively interpolating the Beatitudes. Neil Young's "Old Man" became a personal rumination on her father. She remade the Isley Brothers' "Don't Say Goodnight" as a slow jam for the ladies. It was one of her most sensual recordings ever. The album wasn't one of her biggest sellers but it did earn her a Grammy nomination, for her cover of the Aretha Franklin hit "Day Dreaming."

As recently as September, Natalie was full of plans. She shared with me her hope of making a country-soul record in Memphis; she also spoke of doing a piano-voice album and of recording in Spanish, as she had before. Natalie often signed her notes and letters: "See you in the music."

She often told me that she liked to sing "with a smile in my voice." Not long before she died, she mentioned what she wanted her epitaph to be. She captured herself with impressive economy: "Natalie Cole: the daughter of a king, the mother of a prince, a friend to all."

I'm lucky that the "all" included me. 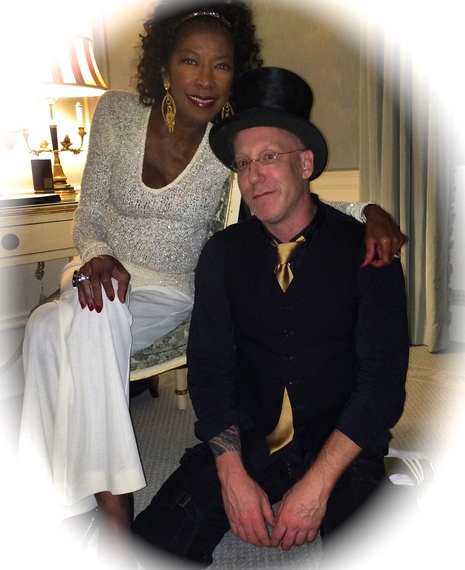 The last photo with Natalie, Christmas 2014 at the Waldorf Astoria, New York City. She hosted holiday parties on each coast. Looking back, I think I know why she did. Photo by David Munk.