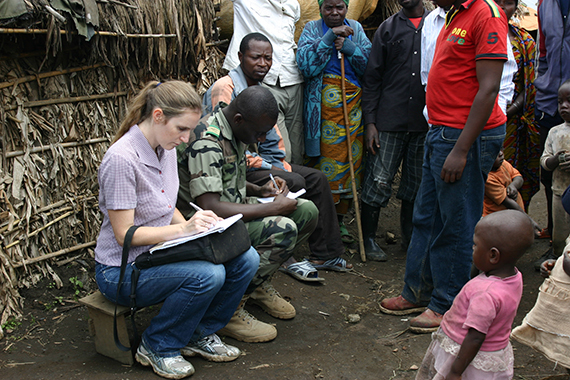 The challenges to civilization seem to grow more urgent by the day--from climate change to racism, to terrorism and income inequality. Solutions are difficult to come by. To address these complex issues successfully, society as a whole must understand their causes and consequences. This is where social science and humanities scholarship can play a significant role.

In April, the Andrew Carnegie Fellows Program awarded $6.6 million to seed the work of a diverse group of 33 scholars from public and private universities across the country. The winners were selected by distinguished panel of jurors based on the originality and potential impact of their proposals. Each fellow will receive $200,000 to pursue scholarly research. The goal of the fellows program, supported by Carnegie Corporation of New York, is to invest in innovative work in the social sciences and humanities that will provide new perspectives on the critical issues of our day.

"We reviewed proposals from the nation's preeminent scholars and thinkers, as well as from the next generation of promising thinkers and writers," says Susan Hockfield, president emerita of the Massachusetts Institute of Technology, who chaired the panel of 16 jurors. "This year's fellows represent a remarkable range of institutions and organizations, and all share a determination to bring new insights to their fields of study.

"The large number of truly outstanding proposals makes the jury's task difficult," she adds, "but it also renews our confidence that social science and humanistic perspectives will--and must--contribute to designing solutions to today's most complex challenges."

The proposals illustrate a broad range of subject matter, each with the potential to change policies, laws and social norms. Among the winning proposals:

• How a person becomes "better prepared" to kill another human being. Through a study of gun clubs and gun schools in Texas and Massachusetts, Harel Shapira, an ethnographer at the University of Texas at Austin, examines the cultural, economic, and political trends that make firearms a justifiable necessity for many Americans. The goal is to provide insights into the growing phenomenon of Americans carrying firearms for self-defense. "These schools offer us a window into a world in which this uneasy relationship between democracy and violence materializes in practice," says Shapira. Moving beyond existing research on gun ownership, Shapira examines gun schools as a "key site in contemporary America where ideas about danger and violence are inculcated and disseminated, and where citizens train their minds and bodies to kill."

• Archiving hundreds of cold-case murders. Margaret Burnham, a law professor at Northeastern University and the first female, African American judge in Massachusetts, is completing an archive of 400 unsolved murder cases from the South, dating from 1930 to 1970, thought to have been racially motivated. In addition to providing a sense of closure for the families and communities, the archival process "creates collective and shared memories of a consequential past," according to Burnham. And it helps "to foster reconciliation and to transform individual memories of traumatic experiences into official history. Sound evidence of historic injustice that stimulates public discourses of repair can shape and frame academic research in multiple fields."

• The nexus between the economy and climate change. Yale University economist William Nordhaus examines the dynamic between the climate change "tipping point" of no return and a model that predicts the danger to the earth's environment based on a country's economic growth and CO2 emissions. Nordhaus's work "focuses on what is arguably the world's most important challenge- understanding and responding to climate change," said Tamor Szabo Gendler, Yale's Dean of the Faculty of Arts and Sciences, who nominated Nordhaus for the fellowship. He added that Nordhaus is well known for combining economics, earth science, and mathematical modeling to measure the impact of climate change.

• "Why African Nations Fail and How to Fix It." Landry Signé of the University of Alaska in Anchorage will conduct a comparative analysis of 48 countries in Sub-Saharan Africa, investigating their politics, economies, governance, development, and peace processes, as well the role of international actors on the continent. Signé, who was born in Cameroon, will develop a comprehensive statistical database spanning more than a half-century and use it to examine why certain African nations succeed while others fail. His conclusions will shed light on areas ranging from economic growth and the alleviation of poverty, to the development and nurturing of democracy.

• Adapting the Muslim culture of refugees to a new European reality. John Bowen of Washington University in St. Louis will study how Muslim immigrants who have settled in European countries are adapting their religious and cultural traditions and practices to their new situations. Carrying out what he calls "practical convergences" involves finding a delicate balance that allows Muslim immigrants to adopt "compromises without abandoning doctrinal positions," he says. Given the recent influx of refugees from the Middle East and Africa, his work is particularly timely.

Other research topics being pursued by the 2016 fellows include economic and demographic shifts in rural America; the potential of abolishing and replacing the prison system; reforms to the judge-selection process; a new vision of a post-imperial Middle East and its implications for democracy and world order; an in-depth look at refugee and asylum issues in Europe and the U.S. to determine effective and humane immigration integration and management; the changing nature of war and what "winning" looks like today; and the examination of alternatives to the United Nations and how to make it more creative and effective.

Throughout its more than 100-year history, the Corporation has supported many individual scholars and their research. In the 1930s, Gunnar Myrdal's An American Dilemma had a significant impact on race relations and was influential in the U.S. Supreme Court's decision in Brown v. Board of Education. In the 1960s and 1970s, the Corporation funded the early works of major scholars such as Robert Caro, who wrote the Pulitzer Prize-winning The Power Broker.

Between 2000 and 2009, the Corporation supported the Carnegie Scholars program, which awarded 168 fellowships to scholars across a broad range of disciplines, including 117 scholars with expertise on the challenges facing Islam and the Muslim world. Many of these scholars are now among the top experts in their fields.

The new cohort of 33 Carnegie Fellows follows in this tradition. The anticipated result of each fellowship is the publication of a book or major study. Learn more about the 2016 fellowship class at Carnegie.org