When I wrote Painting for Peace in Ferguson which tells the story of ordinary people creating hundreds of works of art on the boarded up windows on the streets of Ferguson after months of unrest, one piece of art seemed to foretell the future.
It depicts the quote, "They Thought They Could Bury Us ... They Didn't Know We Were Seeds." 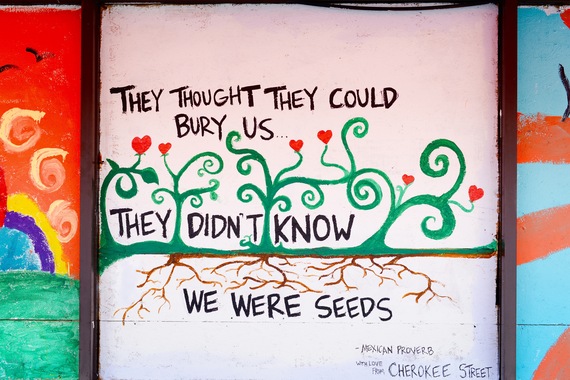 Artist Andrea McMurray quotes a Mexican proverb (also attributed to poet Dinos Christianopoulos) in her painting on the plywood covering the windows of a boarded up restaurant in the heart of downtown. (Photo credit: Ryan Archer)

The phrase has come to represent the viewpoint of those marginalized around the globe. In Ferguson, as the community works toward healing, it has come to have different meanings. To some, it represents the past unfair and systemic practices that kept many of its residents from thriving. To others, it represents how the national media buried the small town in negative stories, which told part, but not all of the truth. According to many who call Ferguson home, the news stories seemed to fit the facts to a predetermined narrative rather than actually seeking a deeper story.
The truth is always more complex than a 140-character tweet or a breaking news flash.

Today, one feeling that is pretty universal no matter who you talk to in Ferguson, is that the work of healing and rebuilding community will be done best with no outsiders present. The good news is, as the quote portrayed in the art says, the seeds of this community that had been buried are sprouting with new life ... and bringing new hope to the city. Even the building on which that artwork was painted is now home to a newly opened restaurant, J & C BBQ and Blues, a real-world example of new growth in the community.

I went to the July meeting of the Ferguson Commission, where a group of area leaders appointed by the governor came up with recommendations for change. After months of study and meetings, they presented 100 Calls to Action in areas as broad reaching as racial equity, economic opportunity, police/community practices, municipal courts and education. These ideas will be narrowed, and hopefully scrutinized through the lens of being do-able, fund-able and measurable as they prepare a final report in September.

In addition, there are almost daily stories in the St. Louis Post-Dispatch and other local media outlets about changes being made on the local, city or state level. A new state bill, SB 5, with broad bipartisan support, was just signed into law. It limits the amount a local municipality can receive from traffic fines to no more than 12.5% of total city income, choking off the predatory practices of balancing city budgets on the backs of its residents through traffic tickets. It also addresses changes to municipal court and police systems. All of these are positive steps in allowing local police to return to being peace officers instead of revenue generators.

But the article that really caught my eye was one headlined "22 school districts offer help to Normandy and Riverview Gardens schools". Michael Brown graduated from Normandy High School. Since these two majority black school districts, located in or near Ferguson, lost state accreditation, Missouri state law has allowed 2,000 students to transfer to other school districts. The state money follows the students, which means for those two districts, which are trying to improve, there is even less funding for the remaining 8,400 students. There's also little left to invest in ways to improve and regain accreditation. The result, whether intended or not, has been to accelerate the downward spiral. Many have tried to fix this, but the only legal fix lies in the statehouse. Despite intense efforts the last few years, politics, as it often does, got in the way.

Instead superintendents from throughout the St. Louis area decided not to wait for change to come from the state government. Instead, in what is a true sea change in past thinking, they agreed if each of the 22 districts helped out in some small way, it could add up to a big impact for the unaccredited districts most in need. This represents a huge shift in attitude from "all that matters is my children in my district" to "what matters is all our children." It recognizes that what benefits each of us benefits all of us.

This is not just feel-good talk. The 22 districts are providing curriculum and professional development as well as sending reading and math specialists to help in the unaccredited districts. But the big news is that many districts are willing to help out of their own pockets by voluntarily reducing the income they receive for the transfer students from the unaccredited districts. As Normandy Superintendent Charles Pearson said to the Associated Press, "When districts begin talking like this, we're acknowledging that all of the children in the region are all of our responsibility. That's a really important shift in thinking."

The proof, of course, will be in how this plays out in the school year to come. The problem of unequal access to quality education is still huge, but the voluntary outreach by the school districts in the area is public recognition that we can do better, and we must.

At the same time, on the grass-roots level, seeds of hope are being nurtured that will bear fruitful change ... as the community looks to itself to heal, one on one, person by person. Residents-only groups such as ONEFerguson are meeting to discuss ways to build a better community "by residents and for residents in a sincere endeavor to move toward ONE Ferguson." Other faith-based groups such as Ferguson Forward meet for potluck meals and discussions while others such as Theology on Tap meet in local pubs.

The Ferguson Youth Initiative which encourages young people to get involved in their community was recognized as one of the "What's Right With the Region" awardees by St. Louis leadership organization FOCUS. Facebook pages that promote discussion and celebrate progress such as the Humans of Ferguson and Ferguson Proud have sprung up. A group of former protesters has opened a Youth Center called the Center of Hope and Peace and established organizations like the Boys and Girls Club have also opened new centers to help. Next Monday, July 27th, local KMOX talk show host Charlie Brennan is sponsoring a "people powered" Ferguson Clean Up Day of the burned out Quick Trip site to welcome the Urban League of Metropolitan St. Louis' new Community Empowerment Center which will provide job training, employment and economic self reliance for nearby residents. Local media has continued to provide an outlet for voices in the community with programs such as local St. Louis Public Radio's podcast series "We Live Here."

And while all this new energy and activity is springing up, the "old growth" community activities, with roots that go back decades, also continued and drew hundreds of participants across all ages and races. From the weekly Saturday morning Ferguson Farmer's Market to the Twilight Run last May to the Fourth of July parade.

In the next few weeks, in commemoration of the one-year anniversary of Michael Brown's tragic death, several Ferguson clergy leaders are sponsoring "We Are All Ferguson" a series of workshops Aug. 2-9, that will bring business leaders, schools, nonprofits, clergy and others to lead discussions, panels, conversations, workshops, prayer, and more. A peaceful memorial march is being planned by the Michael Brown Sr. Chosen for Change Foundation and local PBS station the Nine Network will present a week of special programming during that period.

The reality is not all of these newly sprouted seeds of hope will succeed. Some will wither and die, while others will take root and flourish. But the bottom line is that few in Ferguson are taking their community for granted after coming so close to losing it. The lessons of healing being learned here -- of creating real and lasting relationships, one on one, person to person -- are lessons that just might help the rest of the country as well.

Perhaps the best insight I heard on this change was from one longtime resident who said, "We've been an integrated community for a long time. What the events of last fall showed us is that we didn't really KNOW each other." Now, in church basements, in meetings, in new youth centers, in pubs and on social media, thousands of residents are working to change that and to really listen, learn, pray with and dream with each other and to create a NEW normal that will result in a better community for all of its residents.