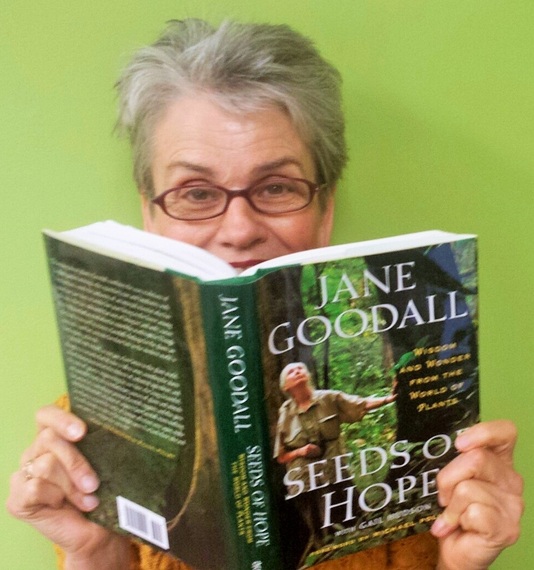 At the 92nd Street Y, I got to interview Jane Goodall on stage about her new book Seeds of Hope. Honored to be asked, a bit anxious about my role, I started cramming well beforehand. I expected Seeds of Hope to be "interesting." I didn't expect it to create a powerful shift inside me. But it did. I began by jumping around in the book, mining for nuggets that I might incorporate into my questions for Jane. But I kept getting slowed down, caught by a thread that intrigued me, and then slowed down even more to scribble in margins and memorize what I wanted -- oh so badly -- to share. Here is just a taste... That plants communicate with each other through their root systems. Why didn't I know this? They can share information. When pea plants experience water shortage, they send a chemical message through their roots warning surrounding plants to begin preparing themselves to better withstand the drought. And they do. They help each other out. Established trees serve as "mother trees" for surrounding youngsters; sending nutrients out through their roots -- and through thread-like fungi that cling to them -- to help the little ones get going. (So I guess I'd gotten it backwards. I'd assumed big trees would hog nutrients young-uns need.) I found myself deep under the earth's surface imagining trees' intricately patterned messaging. Then I got stuck on what tells a seed it's time to jump. Lodgepole pine seeds only germinate when their cones go through fire. Turns out the intense heat is required to melt the cone's hard resin. Why didn't I know this? Almost half of the entire world's biodiversity exists in the canopies of trees. What? And only recently have we begun to explore them. (Could this be one reason that we've not yet named 86 percent of species? Imagine now so many species disappearing before we've even met them.) Trees started appearing about 385 million years ago, playing an increasing role in absorbing C02 and cooling temperatures of the Devonian period enough to enable animals like us to proliferate. Really? Today it's common to thank trees for helping mitigate climate heating, but how many have a clue that we might never have appeared without them? Plants can clean up toxins. Well, I'd visited "living machines" where organic waste is purified as it passes through selected plants, in all-natural sewage treatment. And I'd heard about plants remediating oil spills. But a species of fern that can remove arsenic? Yes, turns out there are twenty other plants native to America that can clean up lead, copper, nickel, and more.

Orchids north of the Arctic Circle? Yes, thirteen species, while Hawaii is home to only three. And a forever-tree? The root system of a single tree on a cold, harsh mountainside in Sweden has survived almost 10,000 years. Yes, dear "Old Tjikko" goes on. Here's my point. It's commonly recognized that beauty touches our hearts; and that interacting directly with plants and animals can stir our emotions. In fact, my evening with Jane closed with a video of one of the most heart-rending scenes I've encountered: A chimp -- who'd been orphaned by violence, found near death, and then revived -- holds Jane in a long, most-tender embrace before sauntering off into the forest leaving humans behind. But what I'd never fully gotten before this book is how knowledge could awaken feelings of intimacy. As I read Seeds of Hope, again and again I felt appreciation, gratitude and awe. And are these not feelings we associate with intimacy and even love? Reading Jane's new book, I actually found myself loving our earth more. It became even more precious to me. And why should I be surprised? After all, we're aware, of course, that the deeper we get to know a friend or spouse, the more love arises. Knowledge changes how we experience life. Knowledge -- not only direct experience or awesome beauty -- opens the heart to intimacy, I am convinced. So, thank you, Jane Goodall, for bringing to my consciousness the truth that knowledge itself is a seed of intimacy. P.S. And, why would anyone be surprised that Jane could awaken feelings of intimacy via plants? After all, you'll learn in this book that she once received a single rose tossed from a low-flying plane as a prelude to a proposal of marriage -- which she accepted.