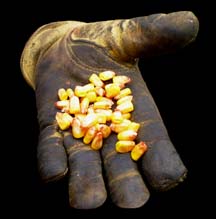 For most of the history of agriculture -- a remarkable span of 10,000 years -- farmers were largely the stewards of the land and the crops that they grew. Seeds collected from one year's harvest were selected, stored, and used again for successive growing seasons. As Frank Morton, an organic seed breeder explains in this segment of the Seeds Of Life series, the role of the farmer at the center of agriculture began to change with the advent of hybrid seed development beginning with hybrid varieties of corn in the 1930s.

Hybrid seeds are created out of two separate parent lines, each (parent) line, incapable of producing the desirable plant characteristics themselves. Only the seeds of their offspring provide the desired mix of traits, which are measured by characteristics such as: crop yield, protein content, oil quality, disease resistance, and other characteristics. Most importantly, especially to the commercial seed companies, the plants grown from these seeds do not produce useful seeds for further use. Once grown, the plants themselves are dead ends; no further selection under the farmer's control can be made to create better crops for the future. Giving new meaning to the term "free enterprise", hybrid seeds can only be purchased from the commercial seed companies (those in control of the proprietary parent lines). Nature's inherent generosity is circumvented.

As Morton points out, beginning in 1965 -- a period he refers to as the end of the golden age of plant breeding -- there was a push to market crops that could be made into hybrids. This is what attracted the giant chemical companies into the seed business. Hybrid technologies, and later, biotechnology innovations, conferred the special ability to prevent farmers from saving and reusing seed, making their investments in seed technologies and chemical teachnologies almost full-proof investments. Land grant universities that formerly conducted plant breeding research under the public domain (and made seeds available to commercial seed companies for sale to farmers), began to shift toward proprietary research to serve private interests instead.*

This is all part of an unfolding story, since after World War II, there has been a massive consolidation of seed, chemical, and related industries to promote global trade. By virtue of size, certain economies of scale offered protection against new entrants into the marketplace, along with the ability to control prices both at the buying and selling end of the value chain. This ushered in the modern industrial food system, one of the most concentrated set of industries in existence today (and one which the Obama administration Justice Department is examining for possible antitrust litigation).

Although the introduction of transgenic seed technologies and the extension of patent protection rights dramatically transferred the control of agriculture to these massive corporations, the full implications have not, as yet, been fully realized.

As Claire Hope Cummings writes in her book Uncertain Peril: Genetic Engineering and the Future of Seeds, whoever controls the supply of seed, controls the world's food supply. Should such concentrated power be allowed to reside within the private realm, or is food so fundamental a right, only governments representing the public interest be allowed to retain ultimate jurisdiction over such a resource?

Originally posted on Cooking Up a Story.

Co-founder, Cooking Up a Story