In the wake of the Michael Brelo verdict, citizens in Cleveland had a choice: to burn and tear down or protest and build up. Despite the push and urge of outside agitators -- carpetbaggers who came into our community from the outside -- pastors, police and community groups held the peace. Clevelanders chose the latter. Why?

First, some background on the Brelo case itself. In October 2013, Cleveland police commenced a massive car chase, responding to alleged shots being fired from two adults in the car. More than 60 police cars were involved in the chase, which ended in the deaths by police shooting of Malissa Williams and Timothy Russell. Over the course of 22 minutes and across 22 miles, 137 shots we fired. Russell was shot 23 times and Williams 24 times. Thirteen Cleveland Police officers were involved in the shooting. The City of Cleveland paid $3 million dollars as settlement to the families of Williams and Russell.

In the last few minutes of the car chase, Officer Michael Brelo climbed onto the hood of the car Williams and Russell were driving and during the last 7.4 seconds shot 15 times through the car's windshield. Brelo was the only Cleveland Police officer charged with voluntary manslaughter.

Brelo's defense was that, even though no gun was found in the Williams-Russell car, in the heat of the shootout, he feared for his life. In the Court's verdict of not guilty on all charges, Judge John P. O'Donnell stated that it was impossible to determine which bullets killed Williams and Russell and, therefore, Officer Brelo could not be convicted.

Putting it mildly, the verdict was unsettling to Cleveland media, clergy, and citizens alike. Some citizens were outraged. But leaders and community activists asked citizens to protest peacefully. Even LeBron James weighed in to CBS affiliate WOIO-TV, that "Violence is not the answer, and it's all about trying to find a solution."

It's that search for solution -- the productive and inclusive focus on the future -- that, we believe, makes Cleveland's response to the Brelo verdict and other police-community issues, special and relevant to similar community issues across the country.

Rev. Richard Gibson, the Tri-Chair of Greater Cleveland Congregations, a social-action association of 40 individual Cleveland religious groups, recently led 800 of GCC's community congregants to protest the Brelo verdict in front of Cleveland City Hall. As reported by cleveland.com, he said, "We appreciate civility in this city. We've come here in civility. But civility is a two-way street."

Across the country, as documented by recent surveys, civility is waning and polarization is increasing. More and more Americans feel uncomfortable talking to their neighbors. Perhaps necessity is the mother of invention, because here in Cleveland, dialogue and civility have become the accelerants for an otherwise frustrated community. Poverty, high school dropouts, lack of jobs, and urban blight dot the landscape of a city and citizenry that struggle with this reality everyday. Add to that stark picture the Brelo case, the Tamir Rice case, and the Tanisha Anderson case (all of which deal with deaths of black citizens confronted by police), and Cleveland was a powder keg ready to blow.

Immediately after the car chase, Mayor Frank Jackson, at great risk of the unknown, called upon the U.S. Justice Department to investigate the police department and Williams-Russell shootings and make recommendations. The result was a scathing document, issued last December, about police use of force. Although the city and police did not agree with all elements of the report, the Justice Department and city this week agreed on a sweeping Consent Decree that will change police training, community oversight, community policing, community complaints, and institute more diverse hiring. Mayor Jackson viewed this intervention as providing great opportunity for Cleveland to change.

There has been broad recognition that, for this change to happen and be sustainable, dialogue must continue and citizen, community and police engagement must occur. And, in Cleveland, the consensus has been that all groups are invited to the table.

An example of this approach -- and why Cleveland has more going for it than just the Cavs and the RNC Convention -- is the Cleveland Purple America Civility Summit held last week by the Cuyahoga County Prosecutor, Boys and Girls Clubs of Cleveland, Cleveland Police Patrolmen's Association and Values-in-Action Foundation. More than 50 groups were represented -- as well as grass roots people from the streets -- by leaders who came together to discuss issues and define our community's core values. 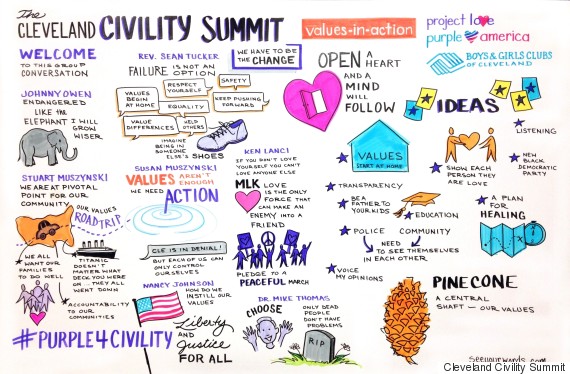 Civility can be unkempt, but it's necessary. Some leaders chose just to observe and not speak. Other leaders admonished the audience that, "There are two Clevelands; Cleveland is in denial." One leader matched our community's values to the quotes and missives about love, hope and non-violence that MLK advocated. All who contributed were helpful, and even those who were just present now have a basis for forming a just and caring community that actually lives the values that were defined.

The Civility Summit participants envisioned Cleveland to be a city of: love, family, education, transparency, equality, trust, community, standing up for each other, safety, respect, restoration, healing, victory, justice, honesty, freedom, values that start at home, self-respect, fairness, acceptance, giving back and faith.

The Chinese symbol for crisis is also the symbol for opportunity. If Cleveland uses the crises of the Brelo case, other misfortunes and tragedies, and the Justice Department Consent Decree to -- now and in the future -- become a model community of values and civility, it will demonstrate to our country that dialogue, goodwill and community can create hope, trust, fairness, opportunity and love. Cleveland, let's get going. America, stay tuned.