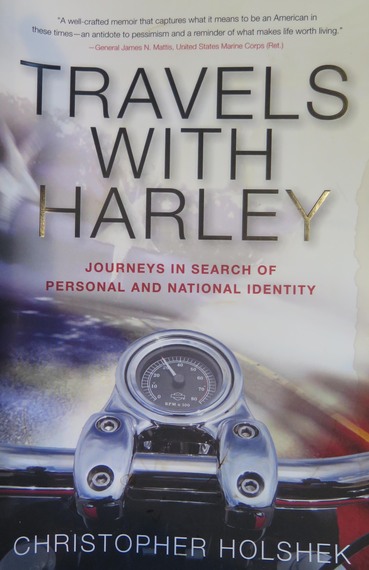 "A journey is a person in itself; no two are alike. We find after years of struggle that we do not take a trip; a trip takes us."
Travels with Charley
John Steinbeck

What does it mean to be an American? Who are we as a people? A nation? What is our role -- individually and collectively -- in today's America and in the world?

These complicated, no-single-answer questions are at the core of the often-brawling debate taking place as the primaries to choose presidential candidates unfold. Although they are not being posed in those terms.

Nor are these questions new. They go to our beginnings, revisited and re-answered throughout our history. In documents and actions -- the Declaration of Independence, the Constitution, the Federalist Papers, the Monroe Doctrine, the Civil War, the Gettysburg Address, World War II, I Have a Dream. And by our writers -- John David Thoreau, Frederick Douglass, Carl Sandburg, Mark Twain, Laura Ingalls Wilder, John Steinbeck.

Add to that incomplete list Christopher Holshek's engaging new memoir Travels With Harley: Journey In Search of Personal and National Identity. As one of the Army's most experienced civil affairs officers with over twenty years of his thirty-year career abroad Col. Holshek brings well-honed experience and nuanced observations to these questions.

He, like all of us who live and serve our country abroad, had the unique privilege of experiencing other places, people and ways of thinking first hand. And the responsibility of representing our country and becoming the face of America to colleagues and acquaintances. Which affords insight into being an American from the outside in -- observing our own country, its people and its ideals through other eyes. And from the inside out -- understanding how being an American shaped our views of our selves, our country and the world. Enriching though this process is, the lessons learned are not always what we expect, starting with that we discover more about ourselves than about them.

"Seeing my country and myself from the viewpoint of other cultures and in a more global context has made me a better American and a better person," Holshek recently told ESPN Radio's "Over the Ball," explaining how he learned to appreciate soccer.

In 2010, as he prepared to retire, Holshek wanted to reconnect with his homeland and provide closure to thirty years in the military. So he rode his new Harley-Davidson over eight thousand miles around the continental United States, starting and ending in suburban Washington DC. Inspired by John Steinbeck's Travels with Charley, he saw the trip as a rediscovery of his own American identity and what that may mean writ large as the Nation looks to re-define its place in the world. Travels with Harley is the timely result.

In this multilayered memoir, body, mind, memory, machine, road, and scenery are linked and find balance. The ride, south and west across the country to California then north and back east to Virginia, provides the structure for Travels with Harley. Its richness and depth come from Holshek's intertwined ruminations on this specific trek (where he was often alone with his recollections), the landscape through which he travels, and the longer voyage of a civil-military career devoted ultimately to peacekeeping combined with meditations on where this country has come from, where it is going and how it all melds.

America, he writes, "is a rich and rough country. Its breathtaking scenery belies the fierce challenges of an environment that has helped shape a national character forged in struggle. ... More than cars, motorcycles are appropriate metaphors for the elemental American quest for freedom in individual and social mobility."

"You can only move forward on a bike," he told me. "There's no reverse gear."

In his Huffington Post excerpt from the book he observes

"America is in and of itself a journey -- more than three hundred million of them -- whose signposts are frontiers and whose ultimate destination is the world's and thus uncertain. It is the greatest collective adventure the world has ever seen. The arc of that collective journey is often a slow, imperfect, torturous, violent, but inexorable march toward freedom and a more perfect union."

Beginnings shape a trip. Rather than go to West Point near his upstate New York home, Holshek opted for New Mexico Military Institute, then returned east, earning an interdisciplinary double major in international affairs and German at George Washington University.

"Both turned out to be fateful decisions," Holshek told me for an article I wrote shortly after his ride. "Not just because it introduced me to 'thinking outside the box,' but also a career of working in civil-military affairs and other spaces in between."

These tours led to rebuilding and peacekeeping assignments in the Balkans and then to Iraq, where he commanded the first civil affairs battalion to deploy there, as Tom Rick's bestseller, Fiasco, explains. His final tour of duty abroad was as Senior US Military Observer and Chief of Civil Military Coordination at the UN Mission in Liberia -- "one of the few American officers wearing the UN blue hat."

His discussions of his work in civil affairs and the related value of 'soft power' (both diplomatic and military) in America's foreign affairs are particularly revealing and cogent. "It's all about building relationships," Holshek explains, because "that's how you really get things done, over here or over there."

Whether in peace operations, counterinsurgency, or counterterrorism, the key is to remember that it's "more about them than us." In his reflections on Iraq, Holshek provides details about how he did not provide solutions but turned the tables and asked community leaders how they would solve their problems and then worked with them through problem-solving processes to empower them. Holshek also established a relationship with the imam, which gave his efforts their credibility and also helped protect his soldiers.

Whether in Bosnia, Iraq or Liberia, Holshek came to learn that

"Civil-military operations and peace building are ultimately about transition management -- from conflict to peace and military to civilian lead. Building peace is about maximizing stakeholders and minimizing spoilers by empowering the former, marginalizing the latter, and converting the uncommitted through the example of success."

In the middle of his national journey, Holshek took a global excursion to escort a group of the George Mason University students to Liberia. Many had never been outside the United States or in Africa. Thus they brought new eyes to the week. Holshek, on the other hand, was returning to a previous assignment for the first time and was able to relay the lessons he learned about engaging others abroad to the students. He left feeling "a bit better about my own country, because I had the vantage point of once again learning to see it from the outside in."

Returning to California and heading "back east," Holshek's understanding of himself and America crystalized. He would later write:

"The significance of America is that its citizens identify themselves based mainly on an idea ...Unlike identity in most countries, American identity in its diversity is a strength not a vulnerability. E Pluribus Unum...The fate of this nation of nations is, inextricably linked to the fate of the world and vice versa. What happens over here matters over there; but what happens over there also matters over here...America has globalized just about everything but itself. The world we largely created is now closing in on us, and we don't like it very much--it means we have to change our profligate ways, get out of our comfort zones, get in the global sandbox and play nice with the others, and compete and collaborate according to rules that suit others and not just us."

In terms of both personal and public sense of identity, Holshek says the takeaway from his travels with Harley is that:

"You have to learn from but let go of the journeys of the past to be ready for the journeys of the future. ...At the center of everything in our public lives is citizenship. Citizenship is ultimately a form of service to others. ... By answering the constant call to citizenship -- local, national and global -- we embrace and renew the strength and promise of American reinvention and renewal."

The end of one journey starts another. Peace building, he says

"Works the same way over here as it does over there. That does more than connect us to our communities, society, and the world at large. There's plenty of opportunity in your own neighborhood to get on the pathway to being a better global citizen and a better American. And when you serve your community, you serve your country."

Travels with Harley is well worth the read for the journey it recounts. But it is much more than a book. Its positive, empowering message -- timely and appropriate in these times -- has become a platform for another trip around the country later this year. The National Service Ride Holshek is leading is designed to help especially younger Americans understand the value of citizenship, service, and engagement, not just for their communities and country, but also for themselves.