I keep having the same conversation, prepared with the same defense:
"Mom was telling me again that I make everything about race when it isn't."

"Well... I don't really know what to tell you, Aryanna," my sister mumbled.
I didn't blame her -- this was the umpteenth time we'd had an exasperated conversation about race, so there's nothing new to say.

It seems that no one really knows what to tell me when I discuss racial inequality. Some have thanked me and lauded my article-sharing and impassioned criticisms of racism in a post-racist America. Others have called me "divisive" and "obsessive," losing friends over such things as "moral differences" or by discontinued contact. I've known many people who voice their disbelief in "white privilege" online without daring to say such things in person.

An Easter Sunday was ruined when my parents told me that I was "obsessed with race" and were concerned about what my college professors are teaching me. And when I go to my friends with my pain, many of them blink back silently. I only know it's no mirage because my laptop shows me our nation's thinkers are taking notice as well.

Every painful instance and realization that I, along with other racial minorities, live in a society with a structure and culture we must adopt in order to succeed is something I am burdened with every single day. Living as a biracial person in the United States means I, like everyone else, live my life through the lens of my identity. And though I detect racial ignorance and inequality, I understand that it is not always blatant or intentional, although sometimes it is.

Here's an instance of both: I went to the gym recently and heard two older white women discussing some perceived wrongdoing involving a plaque. "Well I'll tell you, blacks haven't made any plaques. There are no plaques in Africa," one of them pointedly reminded the other, who agreed. Fully aware I don't know the context of the conversation, the continued dismissal and invalidation of African achievement is something I've heard before from friends, adults and loved ones. I knew what those words implied.

Later, a friend of my sister's put 110 SPF sunbock on her skin despite her caramel color. "Why are you putting sunblock on?" I asked her. "Do you get burned?" "No," she replied, letting it hang in the air as if I should already know why she would want to protect the fairness of her skin. "She's black -- she doesn't want to get any blacker!" a friend joked. The friend said what was supposed to be understood: unlike white girls, light skinned black girls shy away from bronzing because they don't want darker skin. And they're not the only ones: a conversation with a South Indian friend revealed the same hesitation to go in the sun at the risk of getting darker. Skin protection and cancer may be a concern, but I know as well as any teenage girl that wrinkles and mortality feel decades away: we don't often think about it in the summer sun. If not for ideas of racial superiority, why would these girls want to keep their light skin while their white friends are trying to get tanner?

My questions continue to hang in the air, which is why my gripes can be easily brushed away --where is my proof?

It's in the articles I read and the conversations I have, but they are words and statistics often shared by people of color. I have these discussions with white friends, but there are many more white acquaintances who challenge my credibility. The difficulty in these discussions is that racism is perceived, and if we can't all see it, then it's not actually there. How can we collectively fight something we can't collectively see? 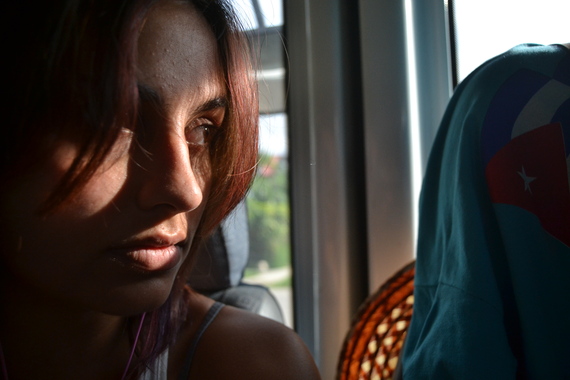 It's visible through critically analyzing American society. As one of my insightful friends taught me, "A system that was not made for you will never work for you." The United States was not made for minorities, so we must fight economic and social disadvantages due to our skin and our ethnicity. Now, we live in a time where coded racism allows people to say racist things without mentioning race. Is it a coincidence that the word "thug" is used exclusively to portray black men as criminals, from football players to our president? Or that "illegals" are imagined as Latin American? The very language that is used to discuss minorities conveys a lack of understanding. We are only as much as the ethnicity boxes we check on forms -- everyone who is a racial minority struggles to define himself or herself outside of the box American society lumps them into. The point of white privilege is not that white people don't work for what they have -- it's that minorities must work that much harder. Yes, even with affirmative action and filling quotas, because people will always devalue work by minorities as if they are simply filling out their box.

An experience, anyone's experience, could be misunderstood or misinterpreted. And though I'm sure I have incorrectly misinterpreted the actions of others, I have verified phenomena by exploring the experiences of minorities. These realizations, of course, have come in university with more experience and research.

Not only have minorities been marginalized in action, but also in thought. Without a recognition of voice by American society and even by our own personal connections, we don't talk about problems that are all-too real for us.

These are the stealthy dangers of post-racism. In the same conversation, my mom wondered how Americans could not be accepting of African Americans when we elected a black president.

This, along with the colorblind sentiment, is the most dangerous idea of all: that by the economic advancement of minorities and recognition by law, we now enjoy a "post-racist era."

Colorblindness is not only an idea in the white community: I have had perhaps more difficult conversations with Asian American friends who grow visibly uncomfortable during discussions of race. One of my most vocal critics during racial discussions is a friend who is both Southeast Asian and white. An Indian American friend laughed and told me he had never been discriminated against. Another Indian friend says that he sees himself as "American," though I imagine people have questioned his nationality more than once. So many of us third culture kids and children of immigrants protest that we are as "American" as anyone else -- but I am questioned in the United States and abroad when I say I'm from Louisiana. When I say I'm half Indian, the questions stop there. Connie Zhou writes about that moment Asian Americans realize they're not white, which soundly resonated with my own experience. I have to ask myself: don't these kids experience these things too?

Understanding that fellow minorities do not perceive racial inequality in the same way I do, sometimes not recognizing it at all, makes me question if I am seeing things that aren't there. Am I more racist by discussing racism? Were it not better if I appreciated the increased inclusion minorities have experienced in recent years, seeing no physical barriers in what we can accomplish? Is race still relevant, or should I aspire to be like those peers who smugly imply they are all the more accepting because they're "colorblind"?

This burden is not only internal: we are implicitly taught to aspire to a white standard of we want to succeed in the "American Dream." Black women in the military are instructed to avoid "unkempt" or "matted" hair. Muslim-American men have been harassed and fired for their appearance, notably for having long beards. According to Forbes, colorblindness actually perpetuates racism in the workplace. Even industries that applaud diversity, such as journalism and media, have few minority writers in their ranks.

I have personally felt the effects of this: I was asked to remove my nose piercing during my internship at the State Capitol because it was perceived as unprofessional. My facial piercing has yet to be understood as a cultural adornment, but it is, and it fails to receive the approval earlobe piercings do.

Why do these instances matter -- isn't that just expected when entering the professional sphere? Because they show a lack of respect and understanding for minority lifestyle and cultural practices. Because they are a painful reminder that the American Dream was not constructed with all Americans in mind.

I know people aren't "trying to be racist." You don't have to be. By participating in a society and culture that is built upon assimilation to a dominant white culture, we are all quietly contributing to the invalidation of the minority experience.

None of this is anything new. But unlike in past generations, it's difficult for everyone to see that there are still structures that promote racism. What's worse is that many institutions now accept minorities who have assimilated to a white standard, allowing an acceptance of what you look like but disapproval in how you act or think. More than filling quotas, minorities need to be able to discuss their experiences healthily and bring that into the general sphere of American society. As long as there are people who don't understand what's wrong with the Washington Redskins, there is failure to validate the anguish in American life through a white gaze.

I can't stop thinking about racial inequality because I see it everywhere, building the walls on which our multiethnic community stands. America is diverse, but we're made to wish we weren't. As long as minorities are not listened to, we will see life in the United States in intensely painful, beautiful color.