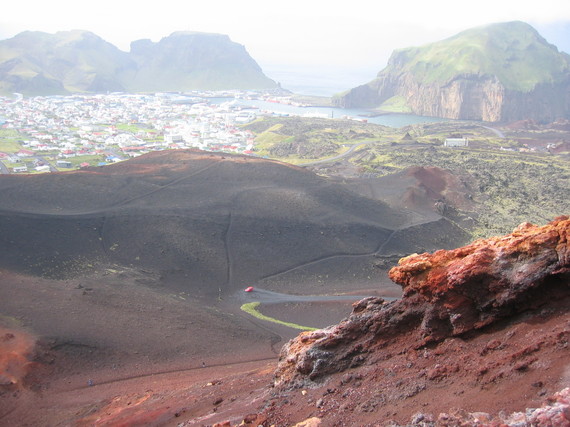 During one of my early trips with Soccer Without Borders (SWB), we scheduled a coaching clinic on the island of Ometepe, otherwise known as a "volcano island." As luck would have it, that same week the volcano began to show signs of erupting. A native New-Englander, my only experience with volcanoes had been my summer as a player in Iceland, where I lived in a town that was literally half-buried by lava (actual photo above). Forty-year-old chimneys poked up out of the igneous rocks; life non-apologetically continuing around them. With this picture firmly in my mind, I knew I didn't want to be on Ometepe island when the lava began to flow.

I expressed my concern to one of our local coaches. She laughed. Then she said I shouldn't worry because if the volcano erupted she would be standing on the mountainside waving goodbye as a helicopter picked me up and flew me to safety. I knew she was joking, but her comment took me aback; I thought we had moved past our different backgrounds and become co-workers, even friends. Walking around the neighborhood and schools, playing and coaching, I felt like the community had accepted me as one of their own. Yet underlying it all was an inequality that I couldn't erase.

The first time I ever boarded a plane to the "developing" world, the ironic juxtaposition of my journey and my intentions was lost on me. I drew on an elaborate web of resources, including a ticket, a passport, a suitcase, immunizations, funds for food, and time off from work, in order to board a plane to better understand life with few resources. I genuinely sought understanding and collaboration, naive to the paradox that presented. I've come to think of this as the helicopter in the room. If it is always there, how do you see past it?

One of the reasons I was drawn to Soccer Without Borders in the first place was its commitment to authenticity: honoring the value and voice of local stakeholders to shape programs. At first, I thought that meant providing necessary resources, training local leaders, and stepping aside as soon as possible. My understanding of authenticity has since evolved. Authenticity does not come from stepping aside, nor standing in front, nor hiding behind. It is a lengthy process of evaluating strengths and weaknesses, adapting existing and effective systems, and working together to align it all: an authentic collaboration. As with any collaboration, differences of language, experience, opinion, ego, belief systems, and stereotypes can derail the process at any moment. Positive change does not come easily, even when all parties genuinely want the same things. Hard work and great programming are essential, but they are not enough. Lasting change requires both of those plus some combination of power, resources, and relevancy. And when the major resources come from the outside, the helicopter in the room is impossible to hide. Enter sport.

Nelson Mandela said it best: "Sport has the power to change the world. It has the power to unite people in a way that little else does. It speaks to youth in a language they understand." The growing field of sport for development and peace is increasingly recognized as a meaningful and effective strategy to reach broader development goals. The reason? Sport is inherently social, and there are actual people, biases, flaws, hopes, dreams and all, behind those development goals. Sport4Development (S4D) programs around the world are creatively building employability skills, motivating educational advancement and literacy, inspiring healthy choices, teaching conflict resolution strategies, addressing and preventing gender-based violence, and supporting healing in post-conflict zones. In these programs, skills are honed in an environment where everyone gets to play by the same rules, under the same conditions: a level playing field. Relationships are built and strengthened in a microcosm where everyone has a voice, and your differences matter less than your contribution to team and the effort you put forth. In S4D programs, we create microcosms where young people get to imagine and live in a world that believes in their potential, and then acquire the skills to make that world a reality.

This weekend, we have the opportunity to share lessons and strategies from our international programs, alongside other U.S. organizations working abroad as a part of the Urban Soccer Symposium hosted by the U.S. Soccer Foundation. The U.S. soccer community is an amazingly generous one, thirsting for ways to tackle inequalities through soccer here in the U.S. and abroad. The workshop is timely; we recently celebrated second annual International Day of Sport for Development and Peace on April 6. The day celebrates some of the most powerful examples of sport addressing some of society's biggest challenges, many of them activated through authentic collaborations across borders. As U.S. organizations, no matter how strained we may feel at times, we have access to resources that are unimaginable to some of our international peers. The most obvious one is equipment; the amount of barely used equipment sitting in basements and garages in this country is mind-blowing. But the solution is not just to pack it up and send it somewhere. Converting privilege into positive action and social change requires first seeking a deeper understanding of the helicopter in the room, and then committing ourselves to a process of authentic collaboration.