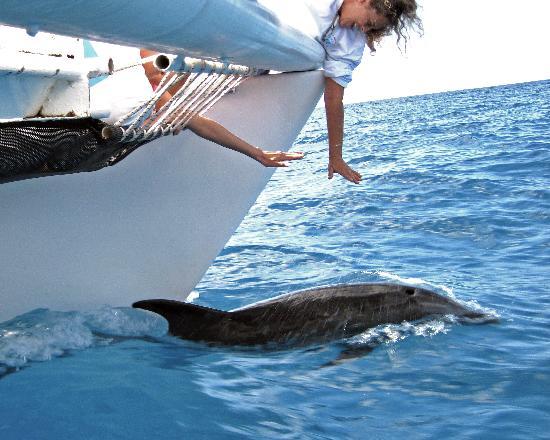 Oahu's western shore offers a daily wild dolphin show, and with a good pair of binoculars you can see spinner dolphins from shore as they leap and twirl before settling down for their daily nap. In the late fall through spring the annual parade of humpback whales can be seen off of the east and southern shores. Add a picnic and beach provisions or a walk up to Makapu Lighthouse (we saw a giant manta ray from there once) and you can have an entertaining and inexpensive day with the family. In a recent catamaran ride from Waikiki beach, we unexpectedly encountered a playful group of bottle nosed dolphins.

By far though, it is worth it to save up and go on a whale watching excursion with a company run by marine biologists (versus regular tour companies). I have tried both types of adventures, and while the biologists may not always approach whales closely or allow you to swim with dolphins, what you will see and learn will leave you with memories of a lifetime.

Biologist and Captain Tori Cullins (Wild Side Specialty Tours) explained that when a pod is seen, the staff observes the dolphins and if they don't show interest in the boat or swim away swimmers are not allowed in the water. This protects the dolphins' need for rest, and insures that the dolphins will continue to seek sanctuary where we can enjoy them.

Some of the big tour boats have been known to just drive up to dolphins and let crowds of people disrupt the animals, guaranteeing a 'swim with people' experience instead of a 'swim with dolphins' experience - yet even that is better than capturing the dolphins and sticking them in tanks.

If you want to watch dolphins as they swim circles in tanks, Sea Life Park offers a circus type performance, or you can pony up big bucks to get towed around by bored-looking dolphins for 30 seconds.

Keeping dolphins in tanks for entertainment is no longer the popular choice it once was, and has no place in the modern world.

The film Blackfish has ignited a controversy over the wisdom of keeping killer whales in captivity, but while much larger, these whales are technically dolphins and many of the traumas suffered by the whales in captivity are also endured by smaller dolphins.

Hawai'i is an island home to spinner, bottlenose, spotted and rough-toothed dolphins. Also, small and large dolphins 'termed' whales, including pygmy killers, false killers, pilot and melon-headed whales - a total of up to 18 species of toothed whales in all. We believe dolphins should be viewed in the wild, only - not in captivity.

Hawaiian ancestors lived deeply interconnected to each other, the land, and the sea. Dolphin (Nai`a) were considered by some to be one form of the spiritual manifestation of the god, Kanaloa.

Humans are terrestrial animals, and our capacity to see and understand the importance and vulnerability of life in the sea has trailed our growing ability to harm it. Our very existence depends upon healthy oceans; dolphins and other cetaceans represent a critical piece to this huge ecosystem and in a world where so much that is wild and free has already been lost to us, we must leave these beautiful mammals free to swim as they will and must.