Imagine you are the first in your family to graduate from college and get a job in a big city. Everyone is proud of you. But when you come home to visit your family, you find out your little sister has been missing school to help with household chores. What would you do?

That was the challenge Sanga Moses faced. Near his family's home in Uganda, firewood is scarce. Instead of going to school, his 12-year old sister often walked for miles every day to gather wood for cooking fuel. Sanga knew that she and the other girls in the community would never reach their potential without an education: an extra year of secondary school for girls can increase their future earnings by 10 to 20 percent.

Sanga took a big risk. He quit his job and dedicated himself to finding a solution to his village's dependence on firewood. In 2010, he started Eco-Fuel Africa, a company that turns farm waste into low-cost charcoal briquettes that burn cleaner and longer than wood fuel.

Sanga is just one of hundreds of innovators who are working with us at USAID - women and men from all over the world who bring new ideas to old challenges. This is important, because bringing in new perspectives is a good way to solve old problems. A recent Harvard study found that people are surprisingly good at solving problems outside of their own fields.They often see possibilities that have eluded experts for years.

At USAID, we are experimenting with ways to bring in new ideas and new voices. For example, through directed innovation initiatives like Grand Challenges for Development, we shine a light on critical problems - like improving childhood literacy or saving newborn lives - and seek new solutions from innovators around the world.

In addition, our open innovation funds, such as Development Innovation Ventures (DIV) and the Global Innovation Fund (GIF), seek solutions to development challenges in any sector that can show evidence of significant impact. DIV is modeled after venture-capital funds with tiered funding stages for solutions as they prove their potential for impact at scale.

In addition, through co-creation workshops, we bring people from diverse perspectives together to jointly define and solve problems. All of these platforms are open to anyone with a good idea.

That includes local entrepreneurs like Pratap Thapa, a man who grew up in Nepal and saw how hard it was to irrigate farmland in the Himalayas. After completing his engineering degree in the Netherlands, he developed the Barsha pump--a hydro-powered irrigation pump.

It includes private companies like Little Thinking Minds, which was founded by two women in Jordan with a background in television production. When they became mothers, they were disappointed with the selection of children's books in Arabic. Now, they're building a digital library of interactive and animated books to help children learn to read.

It includes students like the team from MIT who partnered with Jain Irrigation Systems to win Securing Water for Food's "Desal Prize." They built a solar-powered water desalination system that provides clean water for drinking or irrigation. 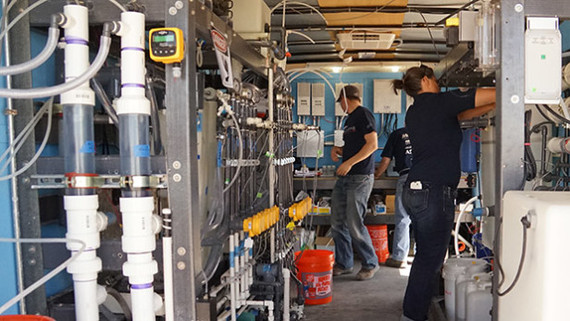 MIT/Jain team competes for the Desal Prize. Securing Water for Food: A Grand Challenge for Development

And it includes other "unusual suspects" like Sanga, the accountant-turned-inventor. By the end of 2015, Eco-Fuel Africa had reached an estimated 48,000 customers through an extensive network of micro-retailers.

By taking an open approach to innovation, we seek to tap into the ingenuity of people around the world who probably would not have partnered with USAID otherwise. For example, of the 153 grantees that have received funding from Development Innovation Ventures, 74 had never worked with USAID before.

In my lifetime, I hope to see the end of extreme poverty. That is USAID's mission, but we know we won't be able to do it alone. We need to engage the smartest, most creative, and most talented people around the world to create the breakthrough solutions that are needed to realize this audacious goal.

That means you! Is there a problem you've always wanted to solve? Do you have a big idea you want to execute? Submit it to Development Innovation Ventures or one of our Grand Challenges for Development.