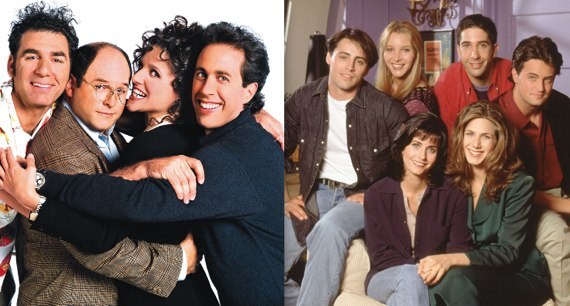 "Seinfeld should have its own 24-hour-a-day cable channel." I remember reading this on Twitter even though I can't remember exactly who said it. (I think it was NHL.com writer Dave Lozo.) I do remember agreeing profusely, because I would find such a channel very appealing. Even now, 15 years after Seinfeld went dark ("The Finale" aired on May 14, 1998), it remains the most re-watchable show on television. But it's more than re-watchable. It's a security blanket after a long day. It's televised comfort food. Sometimes all you want is a very good grilled cheese sandwich.

"The Finale" is only episode of the series that I refuse to watch again. (The episodes that take place in L.A. come close, but I don't hate them enough to change the channel.) The simplicity of the entire series (though, calling it "a show about nothing," never made sense to me because these was always something happening) got chucked out the window in the final installment -- replacing what worked with a barrage of cameos and over-complicated plot points. To me, it's unwatchable. It's like someone took my perfect grilled cheese sandwich and served it with a side of Keith Hernandez's warm piss.

Here in New York City, a local television station reruns two episodes of Seinfeld every night starting at 11 p.m. -- and I'm pretty sure something similar happens almost everywhere in the United States. A couple of months ago, the hour-long episode of "The Finale" aired, so I changed the channel -- after those first couple of minutes that always fool me into thinking it's a normal episode. Because I am lazy and it was late and I wanted to watch something that had the semblance of comfort food, I changed the channel to Nick@Nite -- which was airing a rerun of "Friends."

I have seen every episode of Friends. And yet, until this particular night, I hadn't watched a full episode of Friends since the show ended its run in May of 2004. I've never felt a desire to revisit the adventures of Ross, Rachel, Phoebe, Chandler, Monica and Tribbiani. (For reasons that won't make sense, I've always preferred to refer to Joey Tribbani by his last name.)

Over the last couple of months, however, I've been watching a lot of Friends. Even though both Seinfeld and Friends are bound by being New York-based sitcoms of the '90s, these two shows could not be more different. (And yes, I know Seinfeld premiered in 1989 and Friends lasted well into the 21st century.)

Seinfeld's biggest mistake with "The Finale" was thinking that we cared about what happened to Jerry, Elaine, George and Kramer. We didn't. We just wanted to watch them complain about the same things they had been complaining about in every episode of the previous nine seasons.

I've been enjoying Friends lately, unexpectedly enough. But I've been enjoying it for reasons completely different from those that make me enjoy Seinfeld. While Seinfeld still feels oddly contemporary, Friends feels hopelessly dated. So dated that now, finally, my sense of nostalgia for Friends has kicked in. This is at the same time predictable and alarming. Predictable in the sense that all good television shows will eventually evoke nostalgia. Alarming in that we're already talking about Friends as a relic of the past.

I don't relate to Friends in the present tense. Instead, it reminds me of where I was when I had watched that episode for the first time. There's something appealing about that. For example, when Tribbani (I know, I can't help it) attempts to teach a dance class, I remember being surrounded by my friends in college, being the only one to get a reference to the PBS television show Zoom that would be mentioned later in that episode. (For whatever reason, Zoom was not remembered fondly or even at all at the University of Missouri in 1997.)

I recently watched the final episode of Friends. Rachel got off the plane. I already knew she was going to get off the plane. But it took me back to 2004, just a few months before I moved to New York City. Watching this episode brought back every feeling of uncertainty that I had about moving to the city where Friends took place. It was fun to relive those feelings with the added knowledge that, nine years later, I'm still here.

This is not an endorsement of Friends. Nostalgia is not a good enough reason to enjoy a show. I'm certainly not trying to say that Friends wasn't a good television series. It was. I am saying that it's not a particularly good television show in 2013. (And its reliance on celebrity guest stars - George Clooney, Brad Pitt, Julia Roberts, Billy Crystal and Robin Williams among them -- is just as annoying today as it was back then.)

After the final episode of Friends aired the other night, it was immediately followed by the pilot. In the blink of an eye, all of these characters were ten years younger. That was startling to watch. (Also startling was the opening credit sequence that had no clips from the show to work with, so "I'll Be There For You" by The Rembrandts played over nothing but the cast dancing in front of a fountain on a Warner Bros. studio lot.) I watched this episode, too, which felt as every bit a relic of 1994 as the prior episode had felt a relic of 2004.

Seinfeld has found a way to still co-exist with society in 2013. The 2013 version of me still finds Seinfeld entertaining. Unfortunately, the 2013 of me feels sorry for Ross, Rachel, Phoebe, Chandler, Monica and Tribbiani, who will forever be stuck on an endless loop somewhere between 1994 and 2004. Even if I sometimes still like to visit them there.