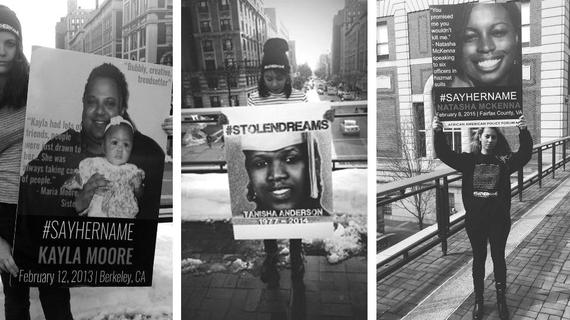 On February 12th, 2013, Kayla Moore, a Black transgender woman from Berkeley CA, was killed when police officers showed up at her home after receiving a disturbance call for a mental health evaluation from her roommate. Upon arrival, the officers did not assess Moore's mental health status, but ran a warrant check instead. After mistaking her for Xavier Moore, a man 20 years her senior with an outstanding warrant who happened to share her birth name, officers attempted to arrest her. When she resisted, five police officers pinned her to the floor while placing a knee in her back and compressing her chest. She stopped breathing minutes later.

A lawsuit filed by Moore's father in 2014 claimed that the officers could have saved her life had they adhered to the WRAP restraint policies and administered first responder mouth-to-mouth resuscitation. He maintains that the decision not to do so was at least partially due to the fact that his daughter was transgender.

Moore is only one of many Black women whose lives were cut short after encountering law enforcement agents unqualified to handle mental health crises. According to the Washington Post, nearly one quarter of those killed by the police in 2015 were described by the police or by family members as mentally ill. The intersection of mental illness, race, and gender has rendered many women exceptionally vulnerable and defenseless at the hands of law enforcement, representing a form of state violence that often gets overlooked by the media and the public.

In August 2014, just days after Michael Brown was killed in Ferguson, Michelle Cusseaux was killed by a Phoenix police officer responding to a call from Michelle's mother, Frances Garrett, who was concerned about her daughter's mental well-being. Cusseaux, a 50 year old Black woman with schizophrenia, was shot and killed at close range by Sgt. Percy Dupra only seconds after he pried open her front door and saw her holding a hammer. No charges have been filed against Sgt. Dupra.

On February 8th, 2015, Natasha McKenna, a 37 year old Black woman, died in Fairfax County Jail after being repeatedly tasered by deputies while in the midst of a schizophrenic episode. McKenna, who was unclothed and unarmed during the encounter, can be heard calling out for help multiple times in video footage of the incident, which was released last September by the Fairfax County Sheriff's office. The video also shows McKenna being shackled, restrained in a chair, and covered with a hood by the six officers, all wearing hazmat suits. A few days before the video was released, it was announced that no criminal charges would be brought against the deputies involved.

The names go on. Tanisha Anderson. Shereese Francis. Tyisha Miller. All of these women, and others whose names we will never know, were killed by the state when they were most in need of its protection.

The tragic and needless deaths of these women have raised questions around the country about whether police officers should be authorized as first responders to mental health calls. Speaking about her sister's death, Maria Moore, Kayla's older sister, said, "The sad truth is, most mentally ill people will see a jail before they see a mental facility. Mental health issues are seen as crime issues - the need to restrain and punish is the first response."

Indeed, police officers have become de facto first responders for mental health calls in almost every state. While most states (forty-five) offer some sort of Crisis Intervention Training (CIT) for officers, few require it. As a result, officers with no prior experience dealing with mental health crises are being inserted into situations they are entirely unequipped to handle. Misinformation about the behavior and needs of mentally ill people can lead officers to act rashly, relying on stereotypes and stigmas rather than facts.

In situations involving a mentally ill person of color, racial bias often determines the difference between an officer deeming the person worthy of empathy, or not. Describing the moments before he shot and killed Michelle Cusseaux, Sgt. Dupra said, "Her eyes were wide open, mouth wide open. She never said a word. She had that anger in her face that she was going to hit someone with that hammer."

"What did the police officer see when he pried open the door?" Frances Garrett, Michelle's mother, asks. "A Black woman? A lesbian? He said it was just a look on her face. What face would you have on if the police broke into your house?"

These senseless killings will not stop until we recognize the role that race and gender play in dominant perceptions of mental illness, and the ways in which stereotypes are used to justify acts of violence perpetrated against women and people of color throughout society. The circumstances of these police killings implicate not only the individual officers involved, but the entire criminal justice system which confers protection asymmetrically and treats our society's most vulnerable members as defective and disposable.