Gomez went on Z100 to promote her new single "Come and Get it" when host Elvis Duran asked her if she has a Hollywood crush.

"Ryan Gosling," admitted a blushing Gomez. "That's a given... But he's super-cute. I've not met him yet. I've seen him on an airplane and I freaked out so I didn't even... I don't even think he saw me."

Perhaps Gosling's taken status is what drove Gomez back to Bieber's arms...

Earlier, on Duran's morning show, Gomez also admitted to being taken aback by another celebrity heavyweight. "You were saying how you met Brad Pitt, you met Jennifer Aniston, you met Madonna and you were so freaked out," Duran's co-host asked Gomez. "Out of those three, which freaked you out the most?"

"Brad Pitt," admitted the 20-year-old and went on to tell a story about the time she was asked to sign something for the Jolie-Pitt kids. "I was super casual, said 'absolutely!' and I sign and all of a sudden he walks into my room. I didn't have time to collect myself because he really is so handsome. And he was like 'I just wanted to say the kids are fans and we watch your show' and I couldn't even function."

But worry not, Jelena fans. Even though your favorite couple has been separated since New Year's 2013 (prior to that, they were on and off for a couple months, after dating for two years) it seems like a reconciliation might be underway.

Last weekend, the Biebs posted a photo on Instagram of him and Gomez getting cozy, then quickly deleted it.

This weekend, the 19-year-old heartthrob posted a photo he has yet to take down.

In it, he is shirtless (naturally) and a sleepy-eyed Gomez is hugging him from behind. He captioned it: "'You've been makin music for too long babe come cuddle' -her." 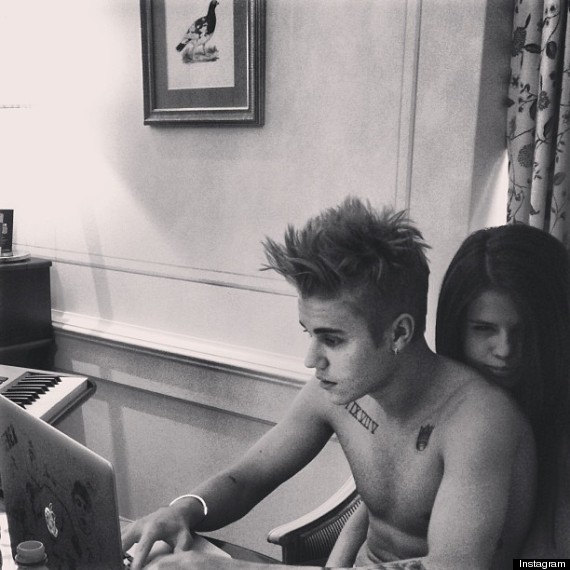 Selena Gomez's Celebrity Crush Is Not Justin Bieber, But He Sure Is Who She's Cuddling (VIDEO, PHOTO)
Ryan Gosling