Selena Gomez is stripping down for the latest cover of V Magazine.

The 22-year-old appears topless in the magazine's 94th issue, looking gorgeous in nothing but a pair of high-waisted jean shorts, red hoop earrings and a polka-dot bow in her curled hair. In another image from the shoot, she poses in a gingham bikini top, a bandana and a cow-print cowboy hat: 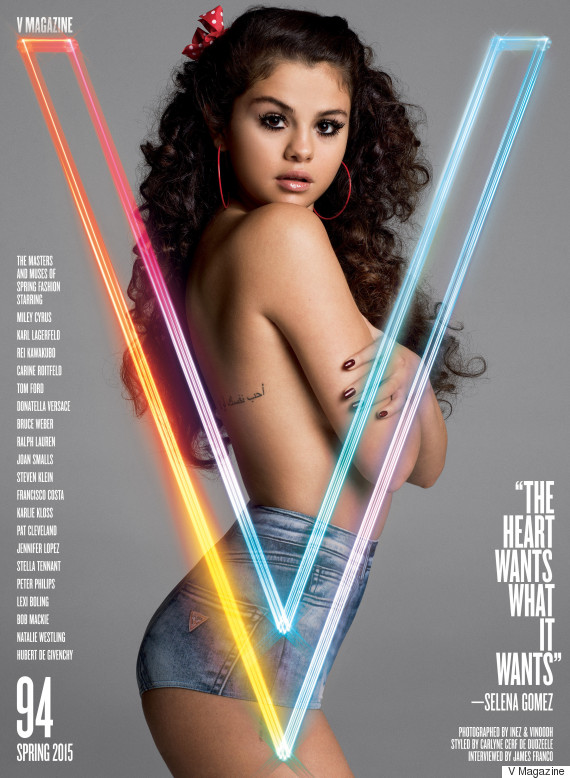 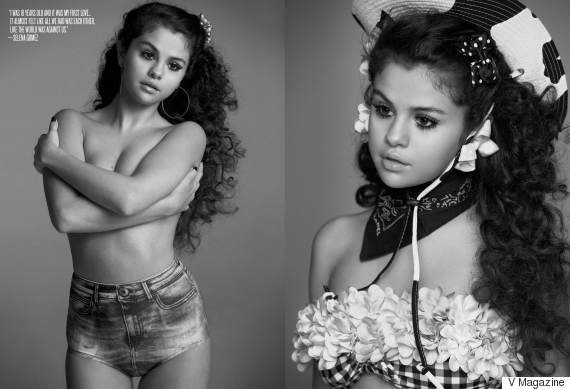 In the accompanying interview by James Franco, Gomez discussed her past relationships and the downsides of being in the public eye.

I think the next time will be much different...which will definitely not be any time soon. That’s a growing up kind of thing. I was 18 years old, and it was my first love. The older I get, I’m guarding certain things more. After being put through the scrutiny, I understand what it is. When you’re young and you’re being told so many different things…it almost felt like all we had was each other, like the world was against us, in a way. It was really weird but it was incredible. I would never take it back in a million years. You live and you learn, you know?

Though she doesn't explicitly mention him, one can assume the "The Heart Wants What It Wants" singer is referring to her on-and-off relationship with Justin Bieber, as she was 18 when the two were first romantically linked. Over the years, their relationship has been the subject of tabloid scrutiny, which Gomez says causes her anxiety.

"There were a few months where I was a little depressed, where I wouldn’t leave [the house] as much," she said.

"I think I drove myself crazy for a little bit. It was just easier to say, 'Hey, do you mind running to the grocery store and picking some stuff up, I don’t want to get photographed,'" she continued.

But Gomez added that she's working on feeling more secure with being in the spotlight.

For more with Selena Gomez, pick up Issue 94 of V magazine, on newsstands Feb. 26.