Self-driving vehicles are already hitting highways and city streets around the world.

“We are delighted to have already developed a solution that we believe will ultimately revolutionize the mining industry,” Torbjörn Holmström, the chief technology officer of Volvo’s truck group, said in a statement. “We expect to be able to significantly increase our customers’ productivity while at the same time improving fuel efficiency and safety.”

The vehicle looks like a regular dump truck and includes a cab section where a driver could sit and take over the wheel. The project is a joint venture between Volvo and its fellow Swedish carmaker Saab, which owns the software firm, Combitech, that helped develop the technology.

The truck travels a preprogrammed route with no human oversight, using sensors and GPS to navigate around fixed and movable obstacles and communicating data it gathers to a transport system hub. That system is the real thing Volvo seems to be selling. In theory, a commercially viable product wouldn’t be the vehicle itself but a network that controls a fleet of vehicles that work in tandem.

Volvo spokesman Fredrik Klevenfeldt did not respond to a call and email requesting comment.

The announcement comes amid a push, largely by European automakers, to develop autonomous vehicles for commercial use. Last month, the Dutch government held the European Truck Platooning Challenge, a weeklong competition that sent about a dozen semi-autonomous trucks driving across Europe. While companies such as Tesla Motors, Uber and Google have pioneered technology for personal self-driving vehicles, autonomous construction and shipping trucks, as Quartz’s Joon Ian Wong notes, “have been quietly putting the concept to work in a business setting.”

Indeed, there’s a strong business case for adopting fleets of self-driving trucks. Autonomous vehicles travel in a pack -- called a “platoon” -- communicating with each other via WiFi, which allows them to drive closer together at algorithmically calculated speeds. Platooning can slash fuel use by up to 15 percent and prevent accidents caused by human error, according to a study by the research firm TNO.

Autonomous trucks could obviate the need for human participation in one of the world’s most difficult industries. Factors like irregular hours, stress and limited access to healthy food or opportunities to get up and move around all combine to degrade truck drivers’ health. Long-haul truck drivers have greater risks of chronic diseases such as heart disease, diabetes, hypertension and obesity compared to average U.S. workers, according to data from the Centers for Disease Control and Prevention. Industry incentives to get cargo to its destination as quickly as possible leave drivers fatigued, turning their big rigs into giant high-speed weapons if they drift off behind the wheel. And in the United States, at least, watered-down regulations only seem to be making things worse.

Mining can be even more disastrous than trucking. Though mining deaths have plummeted in the U.S., in part because mining jobs have decreased, catastrophes periodically capture headlines around the globe. Two years ago, Turkey suffered its worst industrial accident ever when 301 miners in Soma died, some of them burned alive. Last year, a harrowing 2010 Chilean mining disaster was dramatized in a Hollywood movie. Just last week, at least 13 people were killed in an accident at a jade mine in Myanmar.

“It’s a shifting and upgrading of skills; we’re moving from primitive work to advanced work,” Philip Kirchlechner, who spent years in the iron mining industry, told Australia’s ABC last year after a local mining company rolled out about 30 robotic trucks at two of its locations. “By eliminating those mundane, often dangerous jobs, you create safer and more sophisticated jobs.” 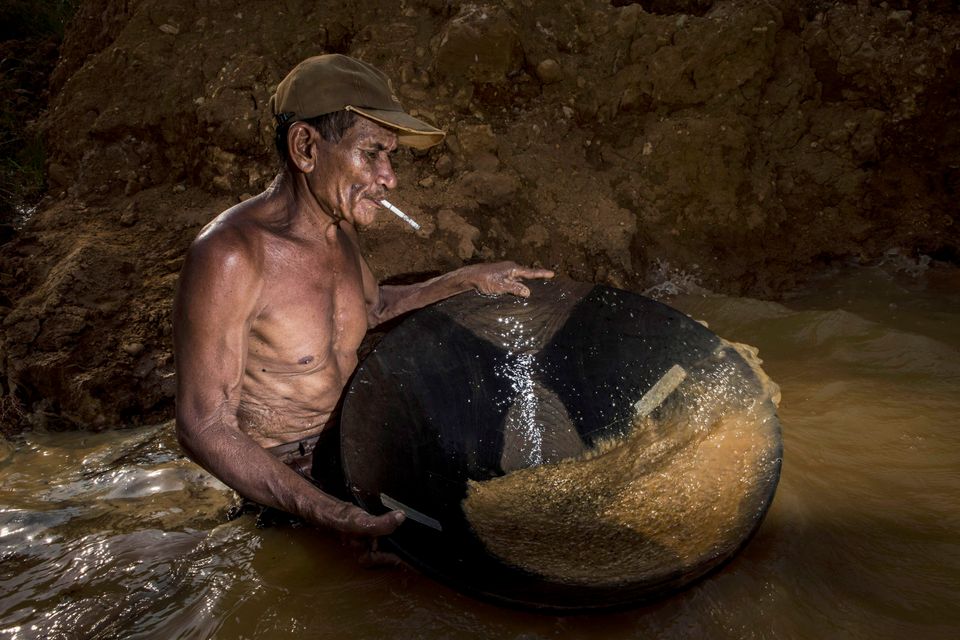 1 / 14
A traditional miner Masda (70), washes mud as he searches for diamonds in Cempaka village at Martapura, also known as the City of Diamond, on November 4, 2015 in Banjarmasin, South Kalimantan, Indonesia. The city is well known as the center of the diamond industry as well as the main diamond cutting and polishing venue in Kalimantan, in addition to being producers of top quality jewelry. Mining has been going on since the 18th century. 1965 was the peak of fame in Martapura when a pink diamond, know as the 'Trisakti diamond' was found. The miners here use only basic tools to search for diamonds. They work in groups of about 10 people, using baskets to haul up the mud, which is then washed in conical bowls known as 'Linggang', which are swirled around. More than 400 miners have died due to landslides since the year 2000. (Photo by Ulet Ifansasti/Getty Images)
Ulet Ifansasti/Getty Images