Creativity is great. In the words of the philosopher Elliot Samuel Paul, "Creativity pervades human life. It is the mark of individuality. The vehicle of self-expression. The engine of progress in every human endeavor." Still, this doesn't mean creativity is always ethical. Creativity comes from humans, and humans are complex. Creative people are the most complex of them all. Therefore, it should come as no surprise that creativity has a dark side. You don't have to look any further than Wall Street to see this!

In a recent study, an all-star cast of creativity researchers -- Paul Silvia, James Kaufman, Roni Reiter-Palmon, and Benjamin Wigert -- looked at the relationship between creativity and personality. A large sample of adult participants reported their creative achievements and creative activities, as well as their personality. Consistent with prior studies, "Openness to Experience and Extraversion" were significantly related to creativity. But... there was also a dark side. While "Agreeableness" (i.e., hostility) had no effect on creativity, those with lower levels of honesty and humility (i.e., higher levels of arrogance and pretentiousness) reported more creative accomplishments and also reported engaging in more creative activities. This effect was stronger than the relationship between extraversion and creativity, leading the researchers to call for more research on the link between creativity and dishonesty.

Enter an even more recent set of studies. Francesca Gino and Dan Ariely tested whether creativity increases dishonesty. In their first few studies, they administered a variety of different measures of creativity, assessing a person's creative personality, behaviors and cognitive style. The participants also completed a "visual perception task." In this task, participants were presented with a bunch of squares looking like this: 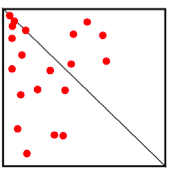 Trial after trial, participants were asked to choose which of the two triangles (right or left) contained more dots (the answer here is "left!"). Participants were told they'd earn half a cent for choosing the left side and 10 times as much (five cents) for choosing the right side. The experimenter's design was cunning. They constructed the task so that on every single trial there were actually more dots on the left. This created a conflict between providing the correct answer ("left") and making the most money ("right"). Also, while on 50 trials it was obvious that there were more dots on the left, on 50 trials they made the answer much more ambiguous. It was precisely these ambiguous trials that provided their measure of dishonesty, since:

"In every ambiguous trial, the participants could benefit from unethical behavior by self-servingly and creatively misinterpreting the ambiguous information they were asked to evaluate. That is, participants could intentionally misrepresent their actual perceptions of these ambigous trials and report "More on the right" simply because they realized that by doing so they would earn a higher payoff. Thus, these ambigous trials can be used to measure dishonesty."

The result? Those reporting higher creativity on their measures chose "right" in ambiguous trials more frequently (i.e., they were more dishonest). OK, but maybe this effect isn't about creativity. Maybe it also has to do with intelligence. In their second study, they tested this possibility by adding measures of "intelligence": cognitive reflection and vocabulary. They also added a few more measures of dishonesty. Again, creativity was positively related to dishonesty. There was no link, however, between creativity and their measures of intelligence, nor a link between intelligence and dishonety. In sum: creativity was a better predictor of dishonesty than intelligence. These results are consistent with the study mentioned above by Silvia and colleagues, but go further by showing that not only is there a relationship between creativity and a dishonest personality, but that there is also a relationship between having a creative personality and actually behaving dishonestly in the context of a psychological experiment.

OK, but is anyone, regardless of their personality, likely to be dishonest if their creative mindset is activated? The correlation between personality and dishonesty is only a correlation. A creative personality could cause dishonesty, but dishonesty could also cause someone to be more creative. Or some sort of different relationship could exist. So the researchers put this to the test in their third and fourth studies. Again, they had participants complete the "visual perception task". But there were now a few conditions. In one condition, participants constructed gramatically correct sentences (e.g., the sky is blue) from a set of words (e.g., sky, is, the, why, blue). 12 of the 20 sentences included words relating to creativity (e.g., creative, innovative, imagination). The researchers did this so that the concept of creativity would be subconsciously "primed." They also had a control condition in which none of the sentences includes creativity-related words. Participants also took a widely-administered test of divergent thinking, which required participants to identify common associations between seemingly unrelated words.

The result? Those who were subconsciously primed with creativity-related words were more likely to be dishonest (chose "right" in ambiguous trials more frequently). What's more, people who entered a creative mindset were more motivated to think outside the box on the divergent thinking test, and it was precisely this motivation that led to the increased levels of dishonesty! It gets worse. In their fourth study, they found that those primed with creativity-related words were again more likely to think outside the box and behave more dishonestly, but they were also more likely to justify their cheating. Not only did the creative mindset increase a justification for cheating, but it was this justification for cheating that led to increased levels of dishonesty. It appears as though activating the creative mindset can be a double-edged sword.

The researchers weren't done. Apparently, they have some sort of vendetta against creativity! In their fifth and final study, they went into the "real world" and administered surveys online to employees across 17 different departments. The empoyees read two scenarios which described a person given an opportunity to behave dishonestly, and they reported how likely they would be to behave unethically if they were the person in the scenario. The empoyees also indicated their department within the company and how much creativity was required on their job. The result? Those in the departments and jobs requiring higher levels of creativity were more likely to report that they'd act unethically in the two scenarios.

Yikes! This all sounds pretty damning for creativity (and for corporations that involve creativity). The researchers propose that creativity

"[H]elps individuals develop original ways to bypass moral rules while allowing them to reinterpret available information in a self-serving way as they attempt to justify their immoral actions. The ability to be creative, combined with the motivation to think outside the box, explains the proposed relationship between creative thinking and dishonesty."

So what are we to make of these findings? Should we call it quits on creativity, and stop promoting it in education, business, and society? Gosh no. Keep in mind these effects are statistically significant, but not completely predictive. These are just trends. There are plenty of extraordinarily creative people who are incredibly honest and engage in ethical behavior. While these results suggest that in the highest positions involving creativity there may be more Bernie Madoff types than Bill Gates types, let's not forget that Bill Gates types do exist. Since creativity is so important for the progress of our civilization, we must still nurture it. But at the same time, let's beware of its dark side. Power does influence creativity, so let's encourage those in positions of power to use the creative force for good.

Note: Want more about the dark side of creativity? I highly recommend the book The Dark Side of Creativity, edited by David Cropley, Arthur Cropley, James Kaufman, and Mark Runco.