With the amount of e-waste reaching astonishing heights, the possibility of self-healing electronics is too good to not explore. Instead of tossing the entire device because of one broken circuit, what if there was a way to fix it? With that mindset, a team of engineers at the University of Illinois published their work in Advanced Materials, showing how they developed a system for electronics to restore conductivity to a broken circuit on their own -- before we even notice there is a problem.

In order for electronics to meet our ever complicated demands, manufacturers load more and more onto integrated chips, increasing the likelihood of a circuit break that could shut down the whole system as the device heats up or becomes fatigued. If an electrical failure occurs in a consumer device, it's relatively easy to replace the whole thing (although it creates e-waste).

However, in valuable instruments and vehicles for space and military functions, it's nearly impossible, but critical to identify where the break happened and fix it manually. 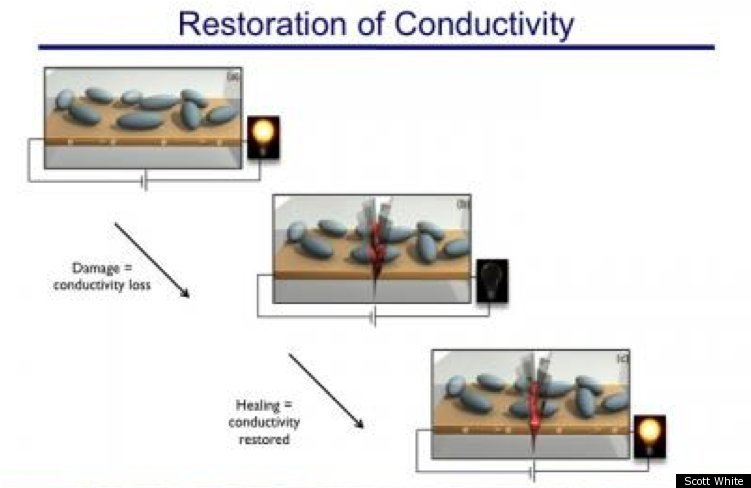 To solve this problem, the Illinois team devised a system to place tiny microcapsules on top of a gold line functioning as a circuit. When a crack occurs, the microcapsules break open, releasing liquid metal that fills the crack in the circuit, repairing the electrical flow.

In the team's trials, the repair is so immediate that the circuit only breaks for microseconds and in 90 percent of the trials it restored circuits to 99 percent of their original conductivity.

The researchers believe the microcapsule approach to self-healing holds promise for batteries and other applications where it's cost prohibitive or impossible to find and access the source of an electrical failure. "In an aircraft, especially a defense-based aircraft, there are miles and miles of conductive wire," materials science and engineering professor Nancy Sottos explains. "You don't often know where the break occurs. The autonomous part is nice -- it knows where it broke, even if we don't."