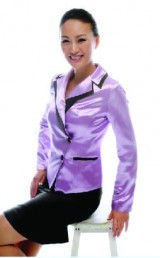 Drinking water is very important for flight attendants who spend a lot of time in the cabin. As a major component that accounts to 70% of our body, water supplies oxygen that is dissolved in it to our body.

The oxygen from the water immediately moves into the blood vessels to help strengthen skin's elasticity and decompose fats. That's why I try to drink a cup of water every 30 minutes when I'm on the flight.

There are healthy ways to intake drinking water a day. Since there is relatively lack of oxygen in the air at altitudes of 40,000 feet, I either shake up bottle waters or gargle several times to make bubbles. By doing this, you can increase the oxygen concentration in water. When I had no appetite, I used to infused my water with fresh mint leaves or fruits and I started to add antioxidants to my water recently.

Antioxidants retard the aging process and prevent aging-related diseases caused by hazardous free radicals that are constantly produced in the body. Active oxygen boosts our immune system to keep us young and prevent diseases. But exposure to excessive drinking, excessive eating, mental stress, or overwork generates more hazardous oxygen radicals than active oxygen that age cells in the body.

As your body's natural antioxidant production ends by mid-30s, you should make your own efforts to supplement antioxidants. Uncontrolled Botox or filler surgeries only deceive the aging process temporarily. You can live a young, healthy life by frequently consuming antioxidant rich foods, such as tomatoes, carrots, broccoli, and salmon, and taking in hydrogen particles that would prevent acidification of the body.

During 10 years of my career as a cabin crew, I've experienced the value of great waters in the world-class hotels and first-class aircrafts several times. Since one of the things I do at work is exploring the taste of water by origin, I feel like I've become a water sommelier.

Water taste or smell may vary depending on the dissolved oxygen content, and its function varies depending on the alkalinity and hydrogen content. You can even tell the quality level of an airline by looking at whether it can provide fine water or not. It's because classy passengers would choose an airline that provides fine water. People who know the value of fine water, or those who take lead in the world economy are careful about drinking water. They don't drink any types of water, but thoroughly checks whether the water is mineral water or sparkling, and even looks carefully what the ice cubes are composed of.

That's why I must check the components and brands of water, and whether the passenger wants to add ice or not before preparing the water. The VIPs know exactly what kind of water and food they fit to manage themselves.

There was a tycoon on my VIP list who would prepare his own drinking water before boarding. When I carefully asked him whether his water was 'miracle water', he replied that it was 'hydrogen water.' Those in the know already took note of functional waters. There are several studies which demonstrated positive effect of hydrogen water intake in atopic dermatitis.

Each drink of hydrogen water will flush our bodies with hydrogen molecules and remove toxins from our skin, brain, liver, heart, and intestines. As a result, your body will be cleaned of toxins and your wrinkled skin will regain vitality.

There is a miracle water called 'Zamzam' in Mecca, Saudi Arabia. My flights from Jeddah are often crowded with passengers going back home with Zamzam water bottles. Unfortunately, you can get this healing water only by visiting Mecca by yourself. Although the component of Zamzam is not scientifically proven yet, there is no doubt that it contains a large amount of something that removes harmful components in the human body.

Drinking hydrogen-rich and highly alkaline water on a daily basis will stop acidification of your body to keep you young and healthy.

When drinking water was first commercialized, people were dubious. When foreigners asked for some "mineral waters" during the 1988 Seoul Olympics, we were doubtful. However, I'm certain that there will soon come a day when people will consider water as a door to curing diseases, slowing down the aging process, and opening a new life, not just a type of liquid that quenches your thirst. Perhaps choosing the right drinking water for you and treating yourself as a VIP can be a specific self-management skill, or rather the way for survival.

*** Ji Byung-rim is a Qatar Airwayscabin service director and the author of three books, including "How toBecome a Crew of Arab Airline", "Thirty-year-old Crew', and"Charming Qatar."