I used to be a design manager at one of the largest software companies in the world. Unfortunately, I had been born with dreaded "dreamer" gene and, as told in my previous blog post, I decided to leave it all to follow my dreams.

Since I was a child, I've been creating characters and stories which I wanted to bring to life in books, games, and movies. I had now decided that the easiest way to achieve "success" with my creations, was to publish an illustrated book.

After several years of working as a designer at companies like Apple and Adobe, I felt extremely confident in my illustration skills. What I felt very unsure of were my writing skills...

English is not my first language (I was born and raised in Lima, Perú) but that didn't really worry me; my grammar was excellent and my accent couldn't be heard on paper. What terrified me was thinking that my stories could be silly, or even worse, boring.

I decided to "ease in" into writing professionally by writing children's books (I figured, fewer words = less chances to make mistakes). I selected "Pookie" (a little penguin character I had created years ago) and his friend "Tushka" (a little polar bear), as the stars of my first book. Supposedly, it is tougher for most people to write for children, but thanks to my immaturity, it was a piece of cake for me!

I submitted my manuscript and illustrations to dozens of book publishers and I had the honor of being rejected by HaperCollins, Random House, Scholastic, and the top publishing houses in the world!

I went to book fairs and personally approached publishers. I kept getting rejected. The publishers that would be willing to talk to me would tell me: "A publisher won't publish your book, unless you have an agent." So then I approached agents, who in turn told me: "An agent won't represent you, unless you have been published before." Something seemed off with the publishing industry...

After the endless rejections, I was wondering if buying all those Writing for Dummies books had been a waste of money... but then the Universe gave me hope: a small publisher accepted my manuscript! I was on my way to success!

The contract arrived and I eagerly opened the envelope. I figured, as a formality, I should read the contract before signing it. Well... it was not a pleasant read. Not only would I make a measly percentage, but also my characters would become property of the publisher and so would my next book. I politely declined their offer.

I was fed up! If I was ever going to publish my books, I needed to take matters into my own hands. That's when I decided I was going to be: a self-publisher!

By this time, I had already written and illustrated a second book about a group of colorful alien characters named "The Blobbies." I decided to self-publish both my books at the same time.

I spent many days in the Barnes & Noble's self-publishing aisle. I registered my manuscripts with the Library of Congress and Quality Books Inc. I bought the brand new Adobe InDesign and worked hard on the "ready to print" digital files for my books. But doing all of this work while still keeping a full-time job was very difficult. Days were too short, I needed more time... and soon the Universe would give it to me!

I had recently turned 30 and to celebrate the occasion, my body developed a brand new kind of "stomach ache." I decided to power through it, as I had no time to get sick, and kept on working until my VERY painful "stomach ache" faded away two days later. But when I started developing a fever, I began to wonder if maybe this was no ordinary "stomach ache"... a few hours later, as I was being rolled into the ER, I was told that I had just powered through appendicitis and my appendix had burst.

Yes, I could have died but, on the plus side, I was forced to take three weeks off work, and instead of accepting my sentence of bed rest with Ricky Lake re-runs, I decided to grab my laptop and use all this free time to work full-time on my children's books!

Soon, my digital files would be ready. All I needed now, was the right printing company, and... lots and lots of money.

You see... in all my excitement of becoming a writer, I didn't realize that printing full-color children's books is waaaaay more expensive than printing paperback B&W novels. I had to use up all my savings, my Adobe stock, and the money from the nice folks at Discover Cards.

A year later, my two masterpieces were ready: Pookie and Tushka Find a Little Piano and Here Come The Blobbies! Now, all I needed was a distributor. 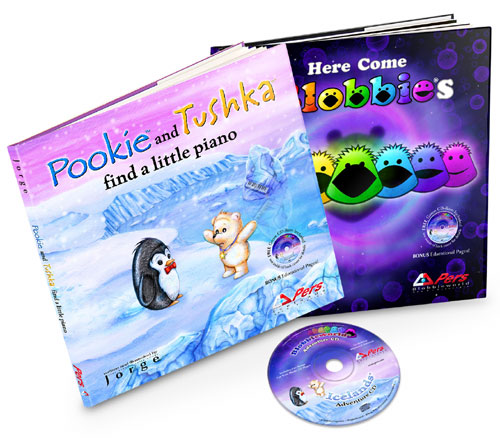 I paid for a booth at Book Expo America (BEA) in L.A. and searched for a distributor. As usual, I kept getting rejected. Distributors didn't want to take a chance on an unproven author. Then someone told me: "If your book gets an award, a distributor may consider you." It seemed like a long shot, but there was hope!

I submitted my books to several awards contests and, lo and behold, both my children's books won several awards, including a Best New Children's Book of the Year award!!! I was ecstatic! Specially because, apparently, I didn't suck as a writer.

The following year I went to BEA again and, very sure of myself, I approached distributors with my awards. Unfortunately, two years had now passed since I published my books and they were now considered "old." The top distributors didn't want to carry them. "SIGH" would be an understatement.

I decided to distribute my books via Amazon.com. Thankfully, the books sold pretty well! I mean, I didn't become the famous writer I was hoping for, but I have a handful of fans all over the world (and if I count my nieces and nephews, I can probably double the amount!).

My books were great accomplishments, because they showcased my skills. My books came with a CD-ROM with songs I'd composed and games I'd programmed... including a Flash game called "Ice Toss Frenzy" (a plot point for a future blog post).

Yes, yes, I am quite talented: I draw, I write, I program, I compose, I even kinda sing... but boy, do I suck at finances!

Let me give you an example of this: I was eventually able to get signed by a small book distributor at the following BEA. By signing with this distributor, I was able to reach bookstores across the U.S. But, the "funny thing" is that, in order to sign with the distributor, I had to stop selling via Amazon.

Well... this distributor didn't promote my books, they would just ship them IF a bookstore requested them (fat chance!). So, now I was selling fewer books than with Amazon. On top of that, shipping my heavy books to the distributor costed me several thousands of dollars, plus I now had to pay monthly storage fees to the distributor for books they would hardly sell. As you can see, a great business decision! One of many that would follow...

My adventures in the publishing industry brought me some recognition and small successes, but not the kind of big success I was craving for.

My never-ending search for success would go on...

MORAL OF THE STORY: If you are a writer planning to self-publish, I strongly advice that you to try eBooks. The risk is much lower. Having to deal with shipping and storing palettes of physical books can be very expensive. If you do decide to self-publish physical books, try to have a deal in place BEFORE you print the books, so ideally your books arrive directly to the distributor's warehouse and there are stores waiting for your books.