In 1914, Russian Grand Duchess Anastasia Nikolaevna Romanova was one of the first young people to take a selfie. At age 13, she stood on a chair and used a camera to take a picture of herself, which she then sent to a friend. Nikolaevna is quoted as saying, "I took this picture of myself looking at the mirror. It was very hard as my hands were trembling."

Selfies have come a long way since then, and, for better or worse (but mainly worse), nobody seems to think twice about taking them anymore. Ever since Myspace and the growth of the front-facing smartphone camera, people have been snapping selfies pretty much everywhere. It's really not ok. We've taken a look into some selfies that never should have been taken, in hopes of giving you some very basic and perhaps obvious rules for when not to take that picture of yourself. 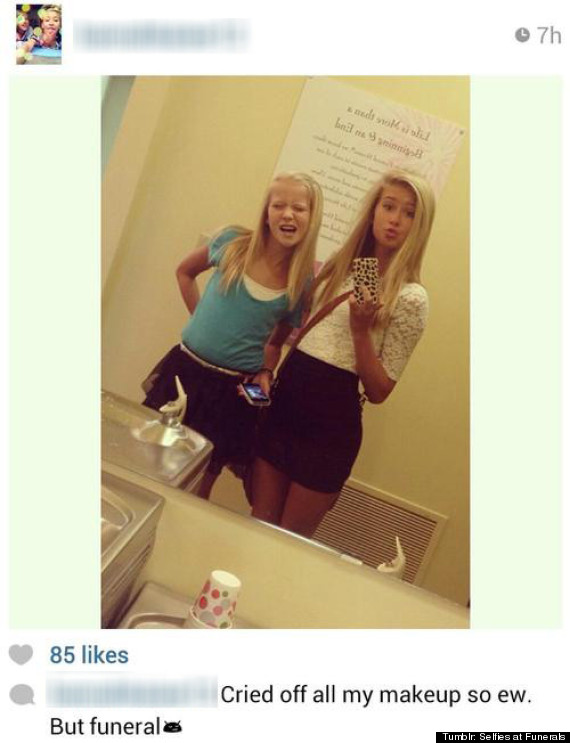 It's really too bad all her makeup got cried off, because the whole point of funerals is to take the attention away from the deceased person and focus on how you look. For more people who feel compelled to take pictures of themselves at services for deceased friends or family members, check out the "Selfies at Funerals" Tumblr.

3. Or tempting fate even further with the selfie in front of someone else's car accident.

Hahaha, that could have been you!

4. The selfie that shows your teacher having contractions.

When this guy saw his teacher going into labor, he had the presence of mind to hop up and take a selfie.

Kevin Rudd, an Australian politician, is no stranger to selfies. Seriously though, did we need to know that you suck at shaving?

Get it? This guy is at the site of the world's worst radioactive disaster, where an explosion at the Chernobyl nuclear power plant caused a chemical fire that burned for more than ten days. A quarter of a million people lost their homes, thousands ultimately died and countless Ukrainians are still feeling residual health effects of the massive meltdown.

7. The selfie in front of a homeless person.

Because nothing says you appreciate your privileged life like taking a picture in front of someone sleeping on the ground. He even threw up the deuces...

8. The "look at this guy in the bathroom" selfie.

We were gonna complain about how privacy has been completely destroyed by the selfie, but this is just hilarious.