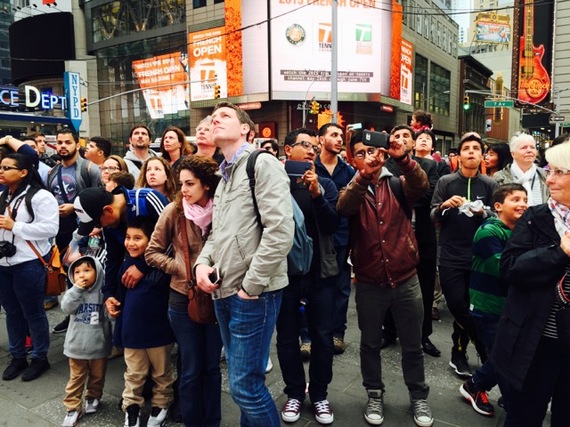 We have the pleasure of living in Midtown Manhattan.

This also means we have the misfortune of living a few blocks from Times Square.

Normally, we try to avoid Times Square at all costs -- even if it means walking a few extra blocks to circumambulate the tourist magnet.

But last week, we could not avoid it.

Walking through Times Square as quickly as possible, dodging the Captain Americas, the Spider-Mans, the Iron Mans and the Naked Cowboy, I was astonished to see about 1,000 people all clustered and staring up at something.

Normally, as a hardened New Yorker, I try to ignore this kind of stuff. But you don't often seen 1,000 people all staring at a single spot. Something big must have been happening. (Maybe someone was jumping off a roof?)

I turned to look.

What they were all staring at, what had grabbed their attention, was... themselves. 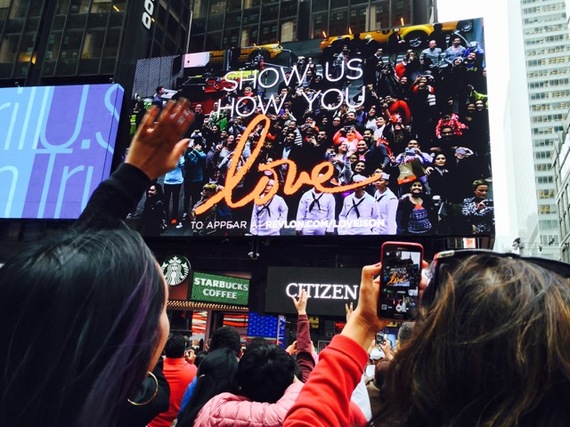 There, on the corner of 43rd Street and Broadway, Revlon had created a gigantic video screen that, instead of projecting ads for Revlon products, was merely showing a live video of the crowd that was staring at the screen.

Well, like they say in show business, give the people what they want.

And clearly what they want to see is... themselves.

It was a fascinating moment. Real, true performance art. Better than anything at MoMA (though I don't think Revlon intended it as such). The "selfie" culture brought to its ultimate conclusion.

There is a psychiatric term called "narcissism," which is defined as "extreme selfishness, with a grandiose view of one's own talents and a craving for admiration, as characterizing a personality type."

Perhaps our whole culture is suffering from this disorder?

The term "narcissism" is derived from the story of Narcissus and Echo, the classic version of which appears in Ovid's Metamorphoses. As they no longer teach Latin or Ovid or even the classics (trigger alert!) in school, most students probably don't know who Narcissus is. In brief, Narcissus, a great hunter, catches a reflection of himself in a pond and falls so deeply in love with it that he cannot stop staring at himself. Echo, who is in love with Narcissus, is cursed by the goddess Aphrodite and now is only able to repeat what she hears. Frustration follows.

This would make a great movie. Certainly better than Tomorrowland, apparently.

We are all clearly first-class narcissists, mesmerized by our own image.

If we are all Narcissus now, is the media Echo, simply repeating what it hears?

If someone were to go back to 1965 and explain what the future is like, they would have to say, "We all carry around these little devices not much bigger than a pack of cards. They have the power to connect us with the totality of all human knowledge. And we use them to take pictures of ourselves all day long, which we then share with people we don't really know."

Narcissim also infects our politics. What, after all, is #BringBackOurGirls? Remember that? Nigeria? Boko Haram? Michelle Obama and millions of others tweeted it. Well, that certainly helped. I think as soon as @Bokoharam saw it, they said, "Oh, oh!" Or was it "Ho, ho?" In any event, all the people who tweeted it felt much better about themselves anyway, even if no kidnapped girls were released. Hey, #ISISOutOfPalmyra!

As the sage Maimonides wrote, "If I am not for me, who will be?" But he also followed with "If I am only for me, what am I?"

We sure have the first part down.

Maybe it's time to focus on the second?