You can spot them from a hundred yards away: the latest inductees into the mobile technology marketplace. They are sixth or seventh graders (give or take a year depending on their social context), heads craned over shiny new phones or cracked hand-me-downs, fingers wagging up and down with a rhythm Mark Zuckerberg taught their parents. The induction curve is steep. They learn in just the first few hours to check and re-check. Soon, even the most confident are looking for validation. Sure, they search for the occasional movie start time or place to eat, but really they are searching for themselves.

A year before, they were free from it. They played and gathered and looked into one another's eyes to read the social cues we all still learn as kids: a smile when something is funny, a grimace when it's painful. A pat on the back, a stern tone, a sigh -- all in person, in real time. But once they're plugged in, all that gooshy, messy, subtle, approximate human expression is tempered by the blunt end of the technology hammer, flattened into posts, likes, unlikes, follows, re-tweets, and favorites. Amazon's quantification of employee value? They got nothing on the new class at the local middle school.

As the parent of a girl on the cusp of this moment, and after watching my son and his friends pass through this rite last year, I contemplate the options. I read voraciously looking for clues, from "The Shallows," by Nicholas Carr, which warns of the neuroplastic consequences our hyperlinked reality can create, to "Reality is Broken," Jenny McGonigal's much criticized arguments in favor of interactive gaming, to "The Teenage Brain," in which neurologist Frances Jensen shows exactly how vulnerable and astonishing the adolescent gray matter is.

None has been so visceral as the "Only Ever Yours", an internationally bestselling novel, winner of the YA Book Prize and the Eilís Dillon Award. Debut 30 year-old Irish novelist Louise O'Neill has crafted a world where girls at "school" are only ever surrounded by mirrors which double as wall-sized screens, feeding them constant updates on their rankings based only on appearance. They have as many minutes as there are in a day to compare themselves to their peers via photos that reveal every flaw. The result: by the end of their "education," their numerical rank on the prevailing social media service has consumed every iota of self-worth.

The book, classified as dystopian YA literature, blew this middle-aged mom away. For parents of college students who suffer from deep anxiety and depression, both of which conditions are on the rise across American universities and high schools, this may be a familiar narrative. But for those of us looking for a graduation present for our late-elementary-aged child, "Only Ever Yours" might be a good way to force some conscious and careful choices about adolescence and social media. 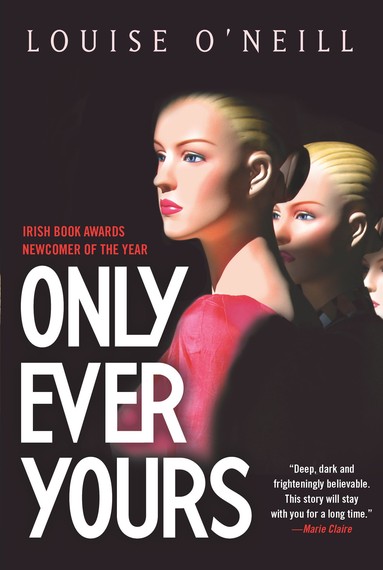 My confident, 11 year-old daughter is at risk from the forces O'Neill's novel describes. While I want her to feel a part of her community, to be connected to her peers so that she can continue to take on more responsibility for her relationships, I'm nervous about her entrée into this world. The full spectrum of negative effects on self-esteem from exposure to social media--especially from image-based services such as Instagram--are just beginning to be understood. And for girls, where appearance is so often the social currency, the potential for damage is immense.

After giving this a lot of thought, my one firm conclusion is that I need to work with my daughter and, to the degree it is possible, with the parents of her close friends, to help her preserve a life that is authentic and rises above the Information Age static. I want her to remain comfortable in her own skin, and to continue to see herself clearly, without the obfuscation of filters and critiques of the Internet. I want it to be as clear to her as it is to me that having access to the always-on, glass-fronted portal of self-validation can solidify our relationships but also create deep doubt and distract from the important and continuing process of striving to know one's self.

I suggest that Kevin Systrom, founder of Instagram, and the countless other tech superstars who have made great fortunes in social media, consider funding research and investing in nonprofits that work to help young people, and especially girls, remain true to their intellect, sense of humor, passions, and predilections. To throw into sharp relief the difference between the person and the pose.

Adolescence should be about more than projecting the perception of perfection--it should be about the messy, all-too-human process of growing up. If not, it runs the risk of the near-future nightmare described in O'Neill's deeply upsetting, essential novel.

Adrienne Becker is CEO of Killer Content, Inc. which has optioned the rights to "Only Ever Yours" and with non-profit Two Brass Brads and Killer division Glass Elevator Media, is working with several non-profits to increase awareness of issues raised in the novel.