To drive past the corner of Mission Road and Selig Place in the Lincoln Heights neighborhood of Los Angeles, you'd never guess they once stood there; giant beasts of the wild, made of stone, who welcomed visitors passing by while standing as a monument to one of the city's earliest film pioneers. For over 50 years, this small intersection, across the street from Lincoln Park was home to an ornate set of gates, adorned with imposing sculptures of lions and elephants, marking the entrance to what was originally the kingdom of Colonel William Selig.

Colonel Selig (he gave himself the title) was a former minstrel and vaudeville performer who eventually turned to motion picture production. He expanded his operations from Chicago to Los Angeles in 1909, and made history by building the first permanent motion picture studio in what would become the film capital of the world. Selig came to find that movie audiences loved jungle pictures, and soon amassed an impressive menagerie of four-legged actors.

Selig soon realized his studio in the Edendale neighborhood was not big enough for his wild beasts. In 1912, he purchased acreage on the east side of town which would house the animals and serve as additional studio space for productions like Thor, Lord of the Jungles, and Wamba, a Child of the Jungle. Ever the astute businessman, Selig had plans drawn up to convert part of the studio into a public zoo, where the animals could earn money, even when they weren't acting.

Carlo Romanelli, a sculptor and native of Florence, Italy, was commissioned to create the entrance to Selig's new zoo. Romanelli's design was imposing, magnificent, and memorable with two massive arched structures flanking a pedestal with eight large trumpeting elephant statues perched upon it. Additional statues of lions were positioned on the stone gates, with some of the cats looking oddly emaciated. The completed result was traffic-stopping and would be burned into the memories of the countless visitors who passed through Selig's entry over the decades.

The Selig Zoo was officially opened on June 20, 1915. Boasting over seven hundred different species, the zoo was a big hit with local residents and tourists. If the stone lions and elephants were not enough to entice guests, live pachyderms would be brought out front to perform tricks and lure ticket buyers.

When World War I affected the international film market, and the popularity of jungle films declined, Selig Polyscope's profits plummeted and the company was insolvent by 1918. Louis B. Mayer and Irving Thalberg kept the Mission Road studio alive for a time before moving to Culver City to run Metro-Goldwyn-Mayer. One of the Selig lions supposedly stood in as the first roaring MGM mascot. Selig hoped to turn the property into a massive amusement center, but the plans never came to fruition, and in 1923, Selig auctioned off the assets of the studio. The sale of the zoo soon followed.

The zoo went through changes in ownership over the years and was known at various times as the Luna Park Zoo, the L.A. Wild Animal Farms, the California Zoological Gardens, and Zoopark. Eventually, man of the animals were relocated to the Los Angeles Zoo, and the grounds served as the Lincoln Amusement Park and Lincoln Speedway. Throughout the years, the one constant was the elephant and lion statues gracing the entrance to the park, which were still capturing the imaginations of those who passed by them. Sure, they looked weathered and showed signs of age with chips and broken trunks, but they were still noble. The gates and statues stood until sometime in the 1960s when they were finally torn down.

It seemed the Selig elephants and lions would become part of the city's history, tangible only through photographs and fading memories. Then, sometime in the late 1980s, social historian Mike Davis, happened upon the statues in a sort of circus graveyard somewhere in the Inland Empire. He referenced the decaying figures in his 1990 book, City of Quartz. Ten years later, a docent at the Los Angeles Zoo, Gene Arias, set upon a mission to find the abandoned works of art. It took Arias six months to locate Selig's great beasts, but he did, and they were donated back to the city's residents via the Los Angeles Zoo.

The statues had survived decades in a junkyard but were in bad shape. Money was raised to restore them, and as of 2009, some of Selig's lions were installed to greet zoo visitors as they make their way through the park. The elephants are still absent, but perhaps they will soon make their entrance alongside the lions and be able to once again serve as a monument to Los Angeles history, and the man who helped make it.

When Elephants Ruled the Intersection: The Saga of the Selig Zoo Statues
Selig's Statues 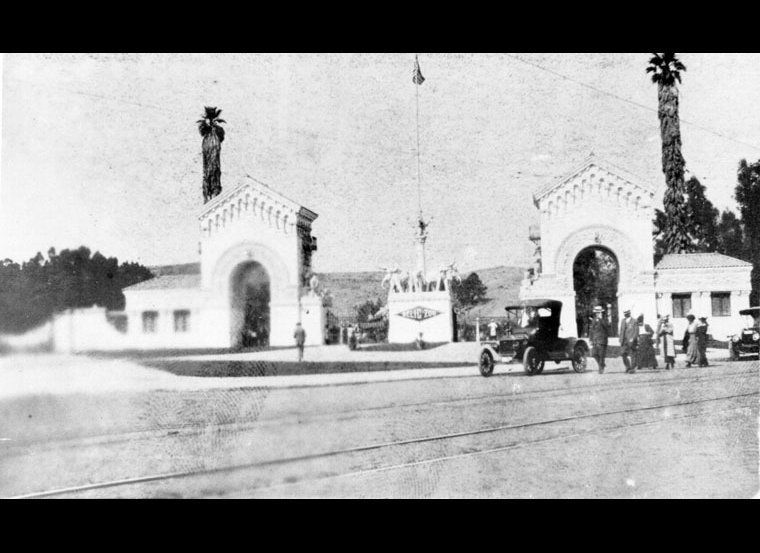 1 / 12
In the Beginning
View of the entrance when it was still known as the Selig Zoo, which opened to the public in 1915. (Security Pacific National Bank Collection, Los Angeles Public LIbrary)