This post was co-authored by Margaret Sarfehjooy and Coleen Rowley.

Since the anti-war protests on Vietnam, the U.S. government has made "perception management" of the American people a high priority, feeding them a steady diet of propaganda about foreign crises, even getting "peace groups" to buy into "pro-democracy" wars.

"War is peace" double-speak has become commonplace these days. And, the more astute foreign policy journalists and commentators are beginning to realize the extent of how "liberal interventionists" work in sync with neocon warhawks to produce and sustain a perpetual state of U.S. war.

More and more "peace and social justice" groups are even being twisted into "democracy promotion," U.S. militarism style. But rarely do we get a window to see as clearly into how this Orwellian transformation occurs as with the "Committee in Solidarity with the People of Syria" (CISPOS) based in Minnesota's Twin Cities, a spin-off of "Friends for a Nonviolent World" (FNVW), steering its Quaker-inspired founding in nonviolence to promote speakers and essayists with strong ties to the violent uprising to topple the Syrian government of President Bashar al-Assad, resulting in a war that has already taken some 200,000 lives.

Do the real pacifist members approve? Or even know?

Middle Eastern expatriates who support U.S. intervention in their countries are especially effective in promoting their message to Western audiences because they provide "proof" of the demonization of governments that the U.S. plans to invade and dominate, and often peace groups include these expats in presentations believing them to be representatives of an entire country.

In Minneapolis, FNVW and its spin-off CISPOS hosted several events with Syrian expats who were on record as supporting the U.S. bombing of their country. (This isn't only happening in the U.S. In April 2011, a Vancouver peace group documented its objection to the fact that other Canadian "peace" groups were sponsoring speakers who justified and advocated "in favor of the NATO bombing of Libya.")

Often Syrian "experts" speaking to peace groups, such as FNVW/CISPOS's upcoming speaker, Mohja Kahf, have ties to the early destabilization of Syria. This American Prospect article documents how Najib Ghadbian, Kahf's husband of over 20 years (apparently up to last year when they divorced) was one of the Syrian dissidents who attended the early 2006 meeting with Liz Cheney (then-Vice President Dick Cheney's daughter), along with other Syrian dissidents to plan how to destabilize Syria and topple its government. Like some Syrian version of Ahmed Chalabi, the neocons' choice to run post-invasion Iraq, Kahf's husband apparently got himself invited to Liz Cheney's "Iran-Syria Operations Group" by having signed the "Damascus Declaration" in 2005, the year before.

When Najib and Mohja sat down for a long 2011 interview with The Arkansas Traveler, they discussed their involvement with the Syrian Revolution, even joking about Ghadbian becoming the next Prime Minister. Kahf and Ghadbian reportedly divorced in 2013 but when CISPOS-FNVW first published her long essays, they were still appearing together at Syrian revolutionary meetings and speaking forums. Additionally, CISPOS's latest handout (December 2014) lists Ghadbian's organization, www.etilaf.us (The National Coalition of Syrian Revolutionary Forces) as a resource "For More Information on Syria and How to Help."

Resources for information on Syria often come from "citizen journalists" with deep ties to neocons and U.S. government sources. From the State Department's website, the $330 million in support for the Syrian opposition includes training for networks of citizen journalists, bloggers and cyber-activists to support their documentation and dissemination of information on developments in Syria.

Syrian dissidents received funding from the Los Angeles-based Democracy Council, which ran a Syria-related program called the "Civil Society Strengthening Initiative" funded with $6.3 million from the State Department. The program is described as "a discrete collaborative effort between the Democracy Council and local partners" to produce, among other things, "various broadcast concepts."

James Prince, the founder and President of the Democracy Council, is also an adviser to CyberDissidents.org, a project created in 2008 by the Jerusalem-based Adelson Institute for Strategic Studies, founded and funded by Sheldon Adelson, a patron and confidant of Benjamin Netanyahu.

Other resources include postings on social media and alternative websites with sensational stories such as the anti-Assad activist "Gay Girl in Damascus" who turned out to be a middle-aged American man in Scotland or Syrian Danny Abdul Dayem, who was frequently interviewed using fake gun fire and flames in his interviews.

With all of the information about Syria, what are we to believe as true? We know the facts about recent U.S. interventions in Middle Eastern countries. Why would Syria be any different?

Afghanistan is still in shambles with the majority of the people living in extreme poverty; Libya, which had the highest GDP per capita and life expectancy on the continent, is now a failed state; Western intervention transformed Iraq from an emerging country with moderate prosperity into an impoverished country with a starving population. In the lead-up to each intervention, "experts" emerged to explain that while anti-imperialism is good in general and in past scenarios, this time is different. Is it? 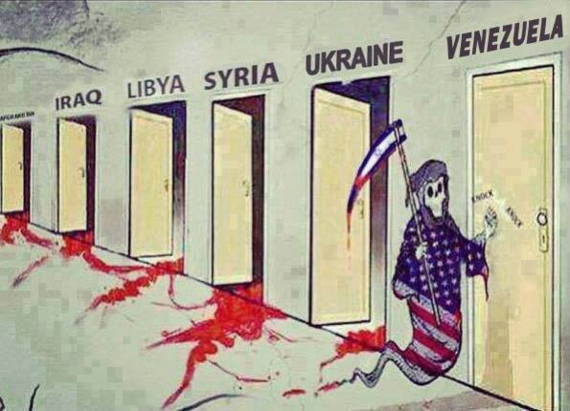 Isn't it time for war-weary Americans to wise up and stop falling for these pretexts of bringing democracy and human rights to foreign countries through training and funding of "color (and umbrella) revolutions," inciting of coups and regime changes and eventually, through U.S.-NATO military might?

Liberal interventionists clearly assist neocon warhawks towards their mutual goal of "full spectrum dominance" under the euphemistic guise of Pax Americana. Only the "Pax" always turns out to be endless war and occupation.