One day the history of this great period of social change will be written in all of its completeness. On that bright day our nation will recognize its real heroes. They will be thousands of dedicated men and women with a noble agonizing loneliness that characterizes the life of the pioneers. -- The Rev. Dr. Martin Luther King, Jr. eulogizing the Rev. James Reeb on March 15, 1965 (full eulogy) 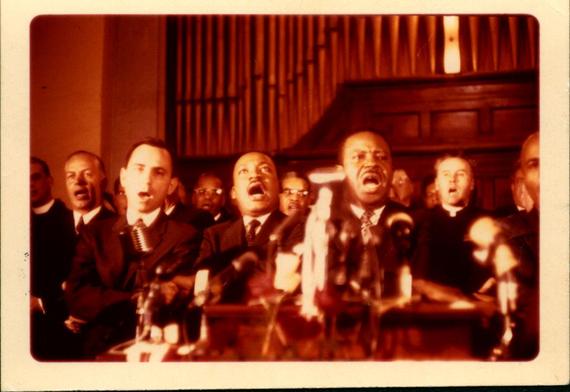 Fifty years ago, the deaths of three people in Alabama outraged our nation and paved the way to passage of the Voting Rights Act of 1965. Jimmie Lee Jackson, a young black man, was shot by an Alabama state trooper on February 18, 1965, while participating in a peaceful demonstration and died several days later. His death prompted the Rev. Dr. Martin Luther King, Jr. to call for a march from Selma to the state capitol in Montgomery.

Following the violent assault on marchers at the Edmund Pettus Bridge on "Bloody Sunday," Dr. King called for clergy to come to Selma in support of the demonstrators, and the Rev. James Reeb, a white Unitarian Universalist minister, answered that call. Reeb was brutally attacked on a Selma street by white thugs and died on March 11. Another white Unitarian Universalist, Viola Liuzzo, a wife and mother from Detroit, Michigan, also went to Selma in response to Dr. King's call. Liuzzo was murdered by members of the Ku Klux Klan on March 25 while driving back from Montgomery.

There, long-suffering men and women peacefully protested the denial of their rights as Americans. Many were brutally assaulted. One good man, a man of God, was killed. There is no cause for pride in what has happened in Selma. There is no cause for self-satisfaction in the long denial of equal rights of millions of Americans. But there is cause for hope and for faith in our democracy in what is happening here tonight.

I have spoken with ministers and lay people alike who witnessed the events in Selma and were forever changed. Our Unitarian Universalist faith community was also forever changed by these events. I believe that today we are better and stronger for that experience. In The Selma Awakening, Mark Morrison-Reed writes,

Unitarian Universalists did not know that Selma would become a pivotal moment in their own history... When they left there were two UU martyrs in their hearts and there was conviction in their stride. They had been changed in ways their lives would reveal but which words could never quite capture.

The fiftieth anniversary of these events -- as well as the superb Oscar-nominated film Selma -- have again turned our country's attention to that small Alabama town. I will be among the thousands of people traveling to Selma to commemorate the sacrifices of 50 years ago and to recommit to the struggle for equal rights today. For it would be a grave mistake to believe that the struggle is over. The deaths of Oscar Grant, Michael Brown, Eric Garner, Tamir Rice and so many others make it abundantly clear how far we are from achieving Dr. King's dream of the Beloved Community.

We, Unitarian Universalists, often describe ourselves as believing in "deeds, not creeds." We are committed to putting our religious values into action, to stand on the side of love with the oppressed, the voiceless and the unseen. We are called today as we were called 50 years ago. Voting rights are being undermined by cynical politicians. Black men are at risk on the streets of our cities and towns. While the abuses of the old Jim Crow might be past, the new Jim Crow is in full swing. We find ourselves again at a pivotal moment in history.

We must recommit to the work of those who struggled before us. We honor the sacrifices of Jackson, Reeb and Liuzzo. But we look also to the future, to the vision of Dr. King's Beloved Community. I encourage everyone -- Unitarian Universalists and people of any or no religious affiliation -- to join the racial justice movement of today, to proclaim that #BlackLivesMatter. The future will judge us by how we answer that call today.