This was originally published on Equal Voice News

It was New Year's Day, January 1, 1966. My older sister, several of my younger siblings, a cousin and I had attended the annual Elmore County Emancipation Proclamation Celebration (the observance of Abraham Lincoln's signing the proclamation freeing Blacks from slavery).

The guest speaker for this occasion was a Birmingham civil rights preacher, Rev. Jesse Douglas, whose powerful message and melodious voice singing, "I told Jesus that it would be all right, if he changed my name," had the audience on its feet for most of his sermon.

Little did I know that he was preparing us for the most traumatic experience of our lives, which would take place in less than four hours.

We went home, excitedly sharing with our parents the experience of the evening with this wonderful civil rights preacher. Our parents listened and allowed us an opportunity to get settled, before giving us the final warning to cut off the light and go to sleep.

At around 1 a.m., less than two hours after our arrival, homemade fire bombs hit three different sides of our house. Exploding flames blocked all exits except one.

There were 11 of us inside, and nine were asleep. Thank God we all made it out safely. Our home burned to the ground.

Although my dad gave the sheriff a homemade bomb that had bounced into his pickup truck that night without exploding, the news reported there was "no evidence of foul play." No investigation was ever done.

My sister and I were among the first Black students to attend Wetumpka High School under a Freedom of Choice plan.

Our motive was simple: We wanted the best education possible in order to attend Tuskegee Institute (University).

It was a decision made with my parents but not any organized effort. Although I will hasten to add that my family was active in the NAACP. My uncle was chapter president, and my sister and I were both in leadership roles in the youth chapter.

On the first day of school in early fall 1965, we arrived at the high school, seven Black students and five mothers, greeted by a sea of angry, jeering White people, mostly men. There were no police escorts, and there was no form of protection.

I think back with reverence at the courage it took for those mothers to leave their children in what was clearly imminent danger and return to their homes to wait -- and to hope and pray that their children would return home safely.

Black teachers were recruited to tutor us and help us process spiteful and punitive assignments by White teachers. We knew our actions were about something bigger.

We were doing this, as my mother said, "for the advancement of the race." She, along with others in our community, would encourage us: "We are so proud of you" and "You are a credit to your race."

We sang freedom songs as a way to build our spirit and retain our focus.

Two weeks into the school term at Wetumpka High, a fight between my sister and a White boy resulted in the arrest, jailing and expulsion of my sister. 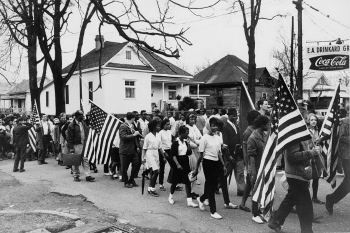 Civil rights marchers participate in the walk from Selma to Montgomery, Alabama in March 1965. Photo by Peter Pettus. Image source: Library of Congress.

She was expelled for a semester for hitting back a White boy who had pelted her with a sling shot rock.

The sheriff held my sister, a high school teenager, in the county jail overnight. The boy was not punished.

Life in the Bracy family was strained at the time, then it got worse. I was trying to adjust to daily taunts from students, teachers who ignored my raised hand and skipped over me in class.

My father was dealing with a hostile White land owner, who was making threats based on the smallest of things and actively trying to block the school bus from coming across his property to pick us up.

My mother was frantically trying to talk to anybody she could to get my sister back in school.

Four months later, with the help of lawyers from the U.S. Department of Justice, my sister returned to Wetumpka High. It was on the day prior to her return, our home was bombed.

Because our family was so large, we were scattered out in the homes of our uncle and three of our neighbors, wearing clothes that were given by many who did not know us, but wanted to help. We did not miss one day of school.

With the help of American Friends Service Committee's (AFSC) Family Aid Fund, our family survived a year of make-shift living arrangements before returning to a normal home life.

It was through the staff of AFSC that we learned about the NAACP's Legal Defense Fund. I received scholarships to attend Alabama Christian College and Auburn University, formerly all-White schools.

I remember the pride that Black teachers took in educating us children when schools were segregated.

Schools in the Black community had a deep sense of the importance of our education.

Certainly schools were horribly under-funded -- we lacked books, learned in crumbling buildings and used leftover supplies from White students. And yet, even in this climate, our teachers and principals often showed great love for learning.

We believed that education was key to our development as human beings. Classroom walls were filled with images of Blacks who were a "credit to our race."

Black history celebrations and assembly programs were opportunities for those personalities to be brought to life through dramatic presentations and performances by students. 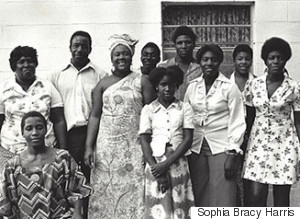 Roosevelt and Marie Bracy are seen with their eight children in 1974. Sophia Bracy has her hair wrapped. Image courtesy of Sophia Bracy Harris.

We were painfully reminded how unfair this system was by the worn school books with the names of White students, often expressing their love for another; the one microscope in our biology lab; and the old run-down bus that left us stranded at least once a week, while the White students rode in a more modern, reliable school bus.

Yes, we knew that this system was unjust and wrong.

Today, we know it is wrong that one third of all African American males in Alabama are incarcerated and have lost the right to vote. It is wrong when we are funding prisons and the military far more generously than the education of our children.

Fifty years ago, it was voting literacy tests and poll taxes that were used to deny Black people the right to vote.

As we commemorate the acts of heroism and courage of ordinary men, women and children, resulting in the passage of the Voting Rights Act in 1965, we call upon every policymaker to advocate restoration of Section V of this Act.

We honor the legacy of Bloody Sunday by answering the call to fight injustice anywhere because it is a threat to justice everywhere.