Saturday marks the 50th anniversary of Bloody Sunday; the pinnacle of Dr. Martin Luther King’s Selma to Montgomery march in Alabama, and an iconic day that directly influenced the passing of the Voting Rights Act of 1965.

On March 7th, 1965, roughly 600 leaders and supporters of the Civil Rights Movement attempted to cross Selma’s Edmund Pettus Bridge, only to be met by a violent wall of police dogs, night sticks and tear gas.

This year, politicians, celebrities and citizens alike are coming together for a day of remembrance. The celebration is scheduled to include a speech from President Barack Obama, a reenactment of the march and a concert in celebration of its determination and success.

As one of the most celebrated marches of the Civil Rights Movement, the half-century anniversary is estimated to bring tens of thousands to the Alabama town to honor the historical day in American history.

Check out some of the local activist groups from across the country making the trek to Selma -- and their powerful reasons to commemorate the ceremony. 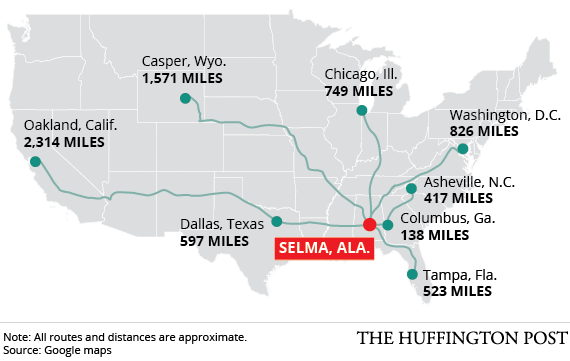 Asheville, North Carolina
One North Carolina man if finally getting to make the trip he meant to do 50 years ago. Robert Zachary was only 15 years old when Dr. King led the legendary march from Selma to Montgomery, and his parents thought he was too young to go. Now, at 65, Zachary intends on finally making the journey.

"I'm going to Selma to give honor and homage to my ancestors, and people of my family who were there and all the great civil rights leaders we don't always hear about — so many remain nameless, but so many fought so hard to have the right to vote.”

Casper, Wyoming
Fifty years ago, Reverend James Reeb was murdered after traveling to Selma to take a stand for civil rights. Today, his family members are returning to that same destination to take part in remembering the cause Reverend Reeb died for.

Reeb’s oldest son John explains why he’s headed to Alabama, “My family are all going down to do what my dad didn’t do, and that’s finish the march.”

Chicago, Illinois
Approximately 50 students from Valparaiso University will travel to Selma for the 50th anniversary. The pilgrimage of sorts is an effort to connect students of the Civil Rights Movement with the living memory of the history they have learned about in their classrooms.

"We can do a lot in the classroom but you're connected to these stories in a new way when you're there," says VU history professor Heath Carter.

Columbus, Georgia
There are more than a few Georgia residents headed to Alabama this weekend. Four buses carrying over 200 people will set off for the ‘Bridge Crossing Jubilee’ on March 8th. The trip was planned in coordination with the Muscogee County Democratic Committee, and has, not surprisingly, sold out.

Oakland, California
Members of the All Of Us Or None organization will ‘Journey for Justice’ to Selma on Saturday. AOUON is a grassroots organization dedicated to ensuring the civil and human rights of incarcerated individuals and their families. The non profit is traveling in support of voting rights and in favor of an executive order to Ban The Box, which would mean the elimination of questioning about conviction history on initial job applications. The group will travel 2,400 miles by van to reach their destination.

Tampa, Florida
Members of the Alachua County branch NAACP will join a bus trip of Tampa residents to the anniversary celebration in Alabama. The chapter’s president, Evelyn Foxx, isn’t the only one excited to make it down -- both buses booked for the journey have been sold out.

Of course, the rallies and reenacted marches will also be attended by about a hundred members of Congress as well as the First Family and President Barack Obama himself, who will make remarks at the commemoration ceremony.

Will you be in Selma for the iconic march's 50th anniversary? Tell us where you're traveling from in the comments below!