In strange art news this week, New York Magazine reports School of Visual Arts (SVA) MFA candidate Marc Bradley Johnson was recently prevented from debuting his final project entitled, "Take This Sperm and Be Free Of Me," consisting of a refrigerator full of 68 vials of his own semen.

"The really great thing about art school is the merit they place on ideas and pushing boundaries," Johnson told the Huffington Post in a phone interview. "The whole thing was so blown out or proportion. The school called my work a threat to homeland security." 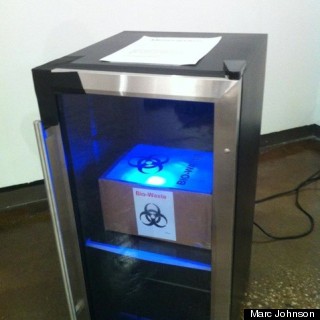 After months of getting his creative juices flowing, Johnson displayed the vials of homemade semen in a refrigerator in SVA's Chelsea art gallery. He also advertised the fruits of his labor on Craigslist, offering vials of semen to strangers to explore themes of "creation, parenting, desire, masculinity, fantasy, and reality," according to a press release. (We have to ask, did this come straight out of a "Portlandia" sketch?)

Although faculty members approved the work in progress, when SVA administration caught wind of Johnson's sticky subject they reportedly expressed concerns regarding safety, New York Magazine reports. As a precaution, they ordered Johnson to kill the sperm by microwaving every single vial. "It's been the craziest week," Johnson admitted during his phone interview with The Huffington Post.

Yet even the microwaving incident didn't assuage the worries of SVA's director of environmental health and safety. "He said the semen is bio hazardous," Johnson said. "And it needs to be quarantined and destroyed." In his final art school venture, the artist told The Huffington Post in an email his semen vials will be sealed in a box labeled "bio hazardous waste" along with a memo reading "SVA sees the creative potential of the artist as a health hazard and deemed too unsafe to be taken by the public."

Although clearly frustrated at the project's change of course, the artist stumbled upon additional avenues to explore in his future ventures. "What does it all mean -- that I am a walking bio hazard dispensary?" He queried, "That every male is a walking bio danger as we go to do our laundry?"

The artist also expressed plans to continue the semen-centric work for the rest of his life. "I am interested in eventually finding a stranger to have a child with me," he said.

UPDATE: We reached out to Michael Grant from SVA to comment on the matter, and he specifically clarified the sexual subject matter was not a factor in the decision to conceal the semen. "There seems to be an assumption, whether on the artist's part or others, that the sexual nature of his work was a consideration in the dialogue to display it," he said in a phone conversation. "That is not the case. In fact, I encourage people to see the show for themselves to understand that that's not the case."

See more shocking acts by artists in the slideshow below.