This summer I spent some time in 29 Palms, where I enjoyed myself at yet one more brutally hot Marine base. But this was a different sort of trip for me; I swapped flak, Kevlar, and boondockers for grandson, girlfriend, and pool sandals; we spent the week visiting my son and his wife. They got married a few months ago when I was in Helmand Province, so we're adding "happily married" to our Rites of Passages card that already includes "Marine" and "combat veteran." It's a trio of accomplishments I hope many of you Marine parents are also enjoying!
But the Irish Pennant in the family is the grandson, now eight, who lives with his mom in Pennsylvania. There's a custody squabble, which is not helped by possible future deployments and MEU's. Being the "tip of the spear" is awesome if you're a Marine, but less awesome for their sons or daughters. And unless one lives close to a Marine base, the news from Afghanistan is uniformly ugly and never seems to include how successful are the Marine operations in Helmand. So what does one tell a child when mom or dad's deployed?

What civilian America doesn't realize is that Marines don't deploy by themselves, but rather as part of a family that's much larger than they envision. It includes family, friends, school classes, church groups who regularly contribute to those many care packages flowing into the AO. These friends and strangers are united in support of their Marines; perhaps an extended Marine Corps family in which "Semper Fidelis" takes on a very personal meaning.

Semper Fidelis is the Marine Corps motto, also known as Semper Fi. It's Latin for "always faithful" -- to your country, to your family, to your fellow Marine. It's an elegant and refreshing code of ethics in a world of Wall Street chicanery and politicians of dubious integrity. But eight-year-olds don't yet think in these terms; to my grandson, "always faithful" means a dad who took him to the Dodger game yesterday, out shooting the day prior, and who reads to him at night.

Semper Fi also means I'm filling when we're home. A lot of it is fun; I bought him some USMC shirts and a boonie cap to wear, and he can "Ooh-Rah Devil Dog" with the best of them. He knows Marines are the bravest warriors in the world -- a visit to the gun park with Sgt Dad convinced him of the coolness of artillery and tanks -- and now he knows that Marines are even braver and stronger than Power Rangers. But in truth, his favorite part is staying up late with his father and watching movies. Perhaps adults understand Semper Fi as the Marines storming ashore at Tarawa, while children view "always faithful" as hanging out with Dad.

Some of it is less than fun. Like many of you, my son's had multiple deployments, and while seven months is a long stretch for those overseas, it's forever to a young child. Technology and imagination help, however; during last year's deployment I used Google Earth to show him how far Helmand Province is from his home in Pennsylvania. It let me explain time zones and how our evening is his morning, so we took photos that we send as a "Good morning Dad" email.

But back to this week's trip where he's reconnecting with his dad. Equally important is that he's seen other Marines and other Marine children, and now he realizes he's not the only child whose dad has to fight bad guys in far-away lands. 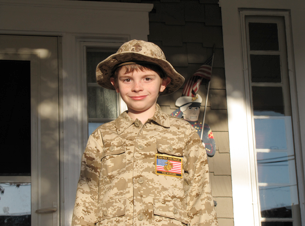