A 2011 family photo of State Sen. Greg Brophy (R-Wray), who has announced a run for Colorado governor, recently got renewed attention when ColoradoPols posted the photo as a "caption this photo" story last week. Photo via Greg Brophy's Facebook page (story continues below photo): 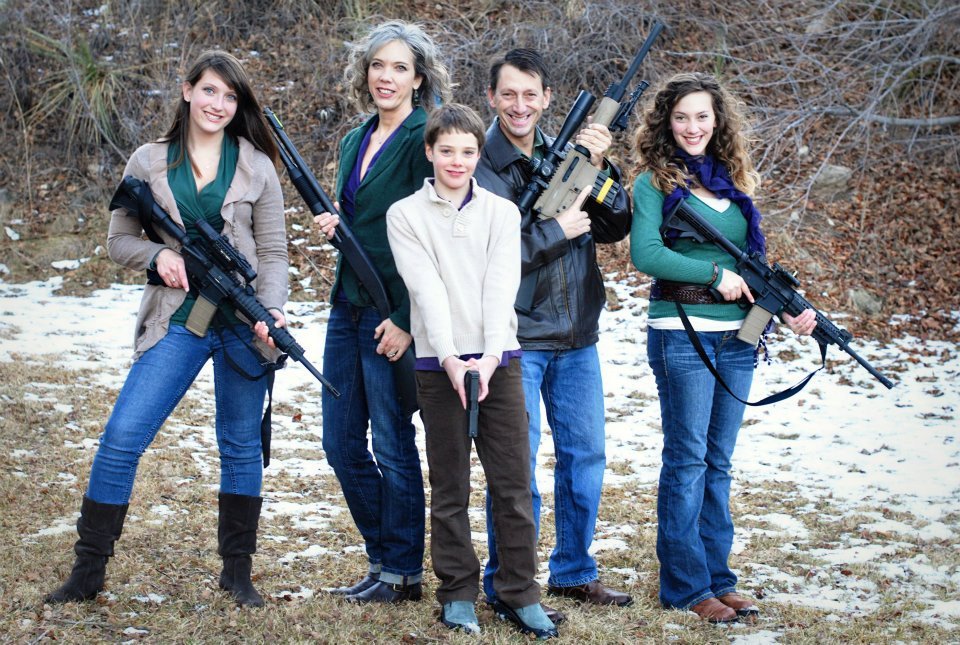 Over the weekend, BigMedia Blog's Jason Salzman noted that Brophy stopped by KNUS' Backbone Radio and talked about the photo and the renewed interest in it after ColoradoPols put it in their story:

And then those goofs -- you know, those lefty goofs over at ColoradoPols -- pitched a fit sometime this past week, over a family photo that we have from back in 2011, where every member of the family is holding a scary black gun, a scary black gun. And it’s a beautiful photo, and we had a great time. We shot hundreds of photos that day, right after Christmas when we had the whole family together for the first time in ages.

I looked at that photo, and my first thought was, 'It’s kind of like a family Charlie’s Angels, you know?' Because you have all the guns at different levels, or different kind of pointing –- no gun is pointing at a human being, but they’re all pointing in different directions. And then I had this vision of these metrosexual liberals in Denver looking at that photo and being horrified. And being like, 'Oh no! He’s got guns!'

Brophy doesn't make a statement about Kafer's idea that Denver's "metrosexual liberals" may be "horrified" by the photo, but he doesn't refute it either, he just simply says that he and his family have fun with their guns. Listen to the entire exchange here, begins around 35:00 minutes.

Salzman astutely points out that the girl in the photo on the left does appear to be pointing a gun at the leg of the boy next to her, via BigMediaBlog:

I have to say, Brophy’s family looks nice, even with the firearms, but there’s a big problem here: Brophy is wrong about the guns not “pointing at a human being.”

I guess that fact that I’m an aspiring metrosexual gives me the ability, which Brophy lacks, to see that the girl on the left is almost certainly pointing his gun at the leg of the boy next to him.

Republican Sen. Brophy kicked off his campaign to unseat Democratic Gov. John Hickenlooper and run for governor of Colorado, on July 14. Former Republican U.S. Rep. Tom Tancredo has also announced that he is also in the race.

As the Brophy family photo might indicate, Sen. Brophy has made no secret of his support for gun rights and his opposition to the recent gun control legislation package signed into law by Hickenlooper earlier this year that includes limits on ammunition magazines to 15 rounds and universal background checks on all gun sales and transfers.

"We now have a gun-control governor," Brophy said during his gubernatorial launch event, The Denver Post reported. "They passed the most extreme gun-control measures ever seen in the Rocky Mountain West."

CORRECTION: The "metrosexual liberals" quote was originally attributed to Sen. Brophy, when it was in fact stated by the KNUS host Kirsta Kafer.

Here Is The Photo Of Sen. Greg Brophy's Gun-Toting Family That May Horrify 'Metrosexual Liberals In Denver' (PHOTO)
Pivotal Moments In The Federal Gun Control Debate