Outside in the breezy air a huge flat screen broadcast Senator Marco Rubio's presidential announcement to the public who couldn't get inside the Freedom Tower. Free tickets disappeared in minutes and the rest of the attendees were invite only.

The optics of the Freedom Tower loomed large: Miami's Statue of Liberty, a former processing center for Cuban refugees, juxtaposed against an American flag ripping in the wind behind the gigantic monitor. It looked great to the media (local and national) who inundated the area like never before in Downtown's local history.

To his credit, Sen. Rubio is a smart and shrewd politician. He should have opportunities to shine in a competitive Republican field 10 times stronger than 2012. But his launch didn't have mass appeal, at least on the outside streets of his own city. Outside, there were more media than people and more protestors than supporters.

Young Latino's were angry over immigration. The dreamers were out in large forces booing and yelling: "What about my family?" and "Your dream is our nightmare!"

It was a circus outside --

Nor did the message of the speech (or subsequent interview with Sean Hannity) seem to have a mass appeal. The gist of the launch focused on the "American Dream" and "American Exceptionalism" as relayed through his personal story with an emphasis on maintaining this dream into a new century. For the record, first off, is Mr. Rubio's personal story really that special or interesting? The son of a bartender and a maid? You should hear the story of my parents. Furthermore, it's the same story we've heard when he ran for Senate four years ago. Guess they think if it worked then.

Furthermore is Mr. Rubio's basic message of American Exceptionalism supposed to be believed? It's good rhetoric and examples exist to illustrate it, but it's no longer a populist message...a more populist message would indicate that the American Dream is in fact already dead -- and it was replaced with entitlement. A more populist message would likely be the core of income inequality and corporate responsibility -- but those are hard messages to believe from Republicans who live off billionaire donors! So to hear Mr. Rubio speak of the past as if the past represented the problem (and our past leaders to blame) just felt naive and delusional. For Mr. Rubio to say "if we fail (our children) will be the first generation of Americans to inherit a country worse off than the one left for their parents" is false hope. Millennials already have it worse. Their children will have it even worse. It would be more interesting and authentic to see a fiery Republican candidate who preached American Exceptionalism while calling out Americans and Millennials for being lazy and entitled.

The message of this election should be wake up, America -- not watch out.

The story of the Rubio launch ultimately wrote itself: that of division -- a division of class -- inside the established suits, outside the poor rabble rousers -- a division of age -- politicians from the past vs. politicians of the future -- and a divide in income -- a divide wider than the Grand Canyon -- the ultimate divide in this country -- bigger than any sermon could bridge. Ultimately in yet another speech with a few stutters and stammers and awkward breaks for water one thing appears for sure -- Marco Rubio is thirsty. Thirsty for what exactly? That's the question. Unlike Rand Paul, Mr. Rubio is relinquishing his Senate seat -- so, what is Marco Rubio jockeying for?

To get on the ticket as VP? A cabinet position?

Because Marco Rubio has no chance of winning the nomination. This guy is not charming like Jack Kennedy OR Barack Obama -- like some pundits like to compare him to. Marco Rubio is no panty dropper. Millennials and Latinos ARE NOT swooning for him (at least not in his own home state.)

They're booing him -- and they're not coming out en masse.

That should be an obvious early indicator. 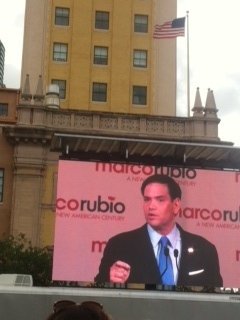 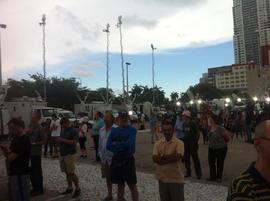 Just only the media was there to see them 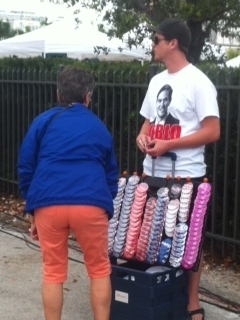 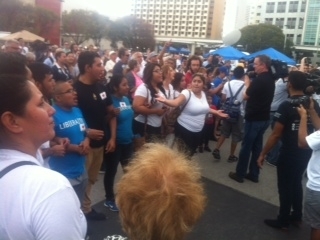 There was an obvious divide between the new Latino base... 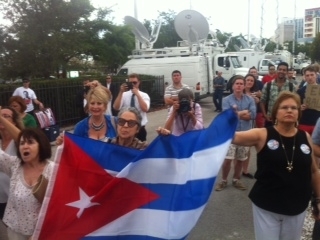 ...and the old...and yes the times are a-changing -- but it seems like Rubio is more attached to the old than the new, a direct contradiction of his core message.