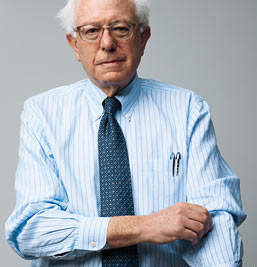 Last week U.S. Sen. Bernie Sanders (I-Vermont) introduced the Social Security Expansion Act, a thoughtful plan to both ensure greater retirement security for today's workers and retirees and strengthen Social Security's finances over the long term. It achieves these goals in large part by reforming Social Security to better come to terms with the much higher levels of inequality in the 21st-century economy.

Social Security's Revenue Structure Is Being Undermined by Inequality

Since the 1970s mutually reinforcing economic and political forces have allowed a larger share of our national income to flow to the owners of capital and to high-level managerial employees, while the wages of average workers have stagnated. The labor share of national income has declined by about 10 percent since 1980, while the share going to the owners of capital has increased by over a third. And within the labor share, the distribution has become more skewed toward the top, with greater inequality than at any time since the 1920s.

Not only has wage growth slowed and become highly unequal, but wealth inequality has grown as well. Today the top 1 percent receive a majority of all investment income in the United States.

Just as inequality is hurting Social Security's finances, it is also hurting average Americans' ability to save for retirement. After three decades with no growth in the aggregate income of the bottom 90 percent of Americans, a new report by the National Institute on Retirement Security finds that the typical working-age household has been able to accumulate only $2,500 -- and the typical household nearing retirement only $14,500 -- in retirement savings, and that more than half (62 percent) of households nearing retirement have retirement savings lower than their annual income. Moreover, today only 14 percent of workers participate in a defined benefit pension, with a downward trend.

As a result of these dynamics, a majority (52 percent) of today's working-age households are expected to suffer a decline in their living standards in retirement. In fact, the total gap between what households aged 30 to 60 have actually saved and what they should have saved by today to maintain their living standards in retirement is estimated to be $7.7 trillion. In short, we have an enormous retirement income crisis in this country. It is arguably our most significant public policy challenge. Yet most of the Social Security talk in Congress today is about cutting, not expanding, benefits.

To ease the retirement income crisis, it would expand benefits by:

Those Serious About Retirement Security Should Embrace This Plan Now

Social Security has been a rock-solid foundation of the middle class over the past 80 years -- always self-funded and never contributing to the debt. It has proven to be an effective, efficient means of providing economic security to the broad middle class. In order to pick up the slack in employer pension provision and individual savings, it should not only be restored to full solvency but expanded. Sen. Sanders' plan would expand benefits while also extending Social Security's solvency through 2060.