Senate Republicans are mailing out a "survey" insinuating that the president's health care reform agenda includes the creation of a lottery system to determine who gets medical treatment and a quota system that based on race and age.

Written under the vague and non-partisan title of "U.S. Senate Health Care Task Force," the mailing, which includes a fundraising letter, was commissioned by the National Republican Senatorial Committee and passed to the Huffington Post by a Democratic source. It asks recipients to respond to several misleading questions, including:

Are you concerned that health care rationing could lead to:

The mailer also suggests that the legislative proposals being considered by Congress would give the federal government the power to:

BELOW IS A PORTION OF THE MAILER:

Here is the survey: 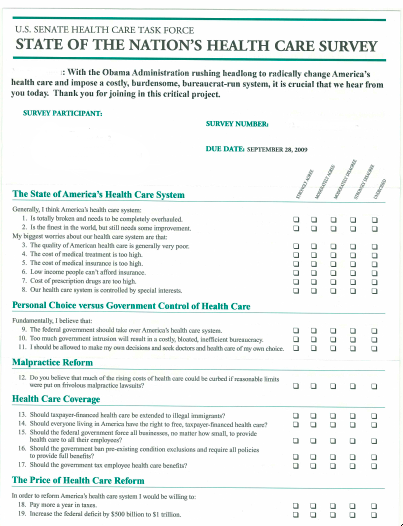 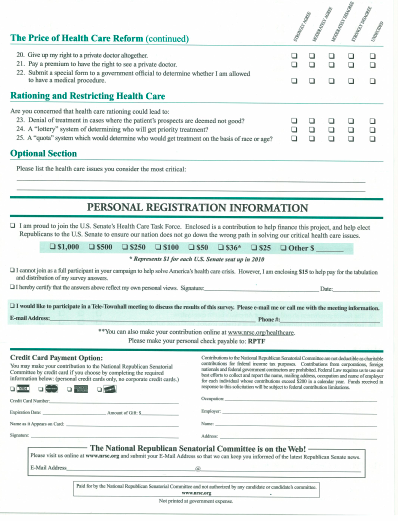 All of these descriptions are either intentionally misleading or deeply contested interpretations of the health care provisions put forth by Democrats. And while the name and NRSC title -- "Chairman" -- of Senator John Cornyn, (R-Texas) is listed in the header, there is no mention of the fact that he's a Republican. Only in the sixth paragraph is it revealed that "Republican leadership of the United States Senate" commissioned the survey.

In addition to asking recipients to fill out the survey, Cornyn also encourages donations "of at least $25, $50, or even $100 to help finance this project and elect Republicans to the U.S. Senate."

Mailers such as these are standard fare in legislative and political battles, certainly those as hotly contested as the current health care debate. But recently they seem to be the preferred practice of Republican campaign committees. Several weeks ago, the Republican National Committee was roundly criticized for sending out a mailer which erroneously suggested that President Obama's health care proposal would discriminate against Republicans.

"It has been suggested that the government could use voter registration to determine a person's political affiliation, prompting fears that GOP voters might be discriminated against for medical treatment in a Democrat-imposed health care rationing system," read the mailer. "Does this possibility concern you?"