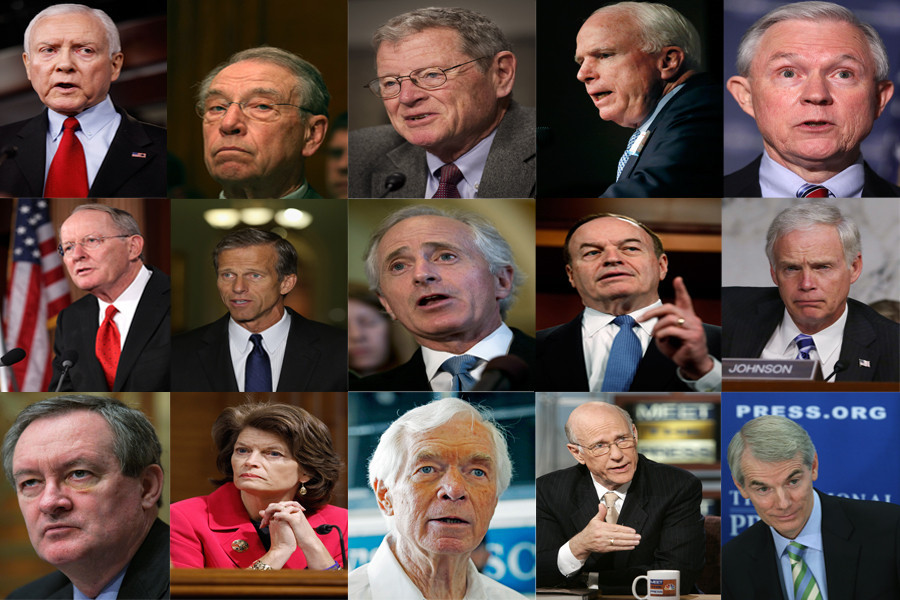 Maybe he doesn't, but Republicans certainly are. The possibility that the GOP could win the Senate is already serving to encourage obstruction. "Regardless of whether the GOP takes the majority in the Senate, the prospect of a takeover is impacting pending legislation," reads a memo from a Republican lobby shop, Clark Geduldig Cranford & Nielsen. "Conservatives in the House reason their approach to compromise this way: 'Why work with outgoing liberal chairmen, when conservative chairmen will assume gavels in January?'"

The memo goes on to forecast how the game of musical chairs will unfold if Republicans win the six seats needed to take control: Here are the (mostly) old white men and one woman to watch for.

In addition to possibly repealing Obamacare, particularly its tax provisions, Hatch supports reforming the federal tax code and cutting "more than 50 percent of the federal budget."

During debate over the Senate's last immigration bill, Grassley attached 77 amendments to the bill and took issue with its path to citizenship. Doesn't bode well for immigration reform.

Inhofe would like to limit the reach of President Barack Obama's recent executive order to cut power plant emissions 30 percent by 2030. Oh, and the senator thinks climate change is a giant hoax.

Republicans expect that McCain would become chairman of the committee because of his greater length of service -- rather than Inhofe, the current ranking member. McCain has long been an ardent war hawk, supporting military intervention in Libya, Syria and now Iraq -- as well as most of the globe at one point or another in his career.

BUDGET COMMITTEE
Sen. Jeff Sessions (Ala.), although Sen. Mike Enzi (Wyo.) has seniority over him and could claim the chairmanship.

As an opponent of wasteful government spending and a backer of Rep. Paul Ryan's budget, Sessions would likely support slashing the next government budget. Recently, he voted to block funding for veterans' care.

Alexander would likely try to clamp down on the power of the National Labor Relations Board and the Department of Health and Human Services.

Thune would probably join with the House Republicans focused on overhauling telecommunications regulations and might tackle new legislation on "how best to promote an open, competitive and free Internet."

The lobby shop memo notes that "with foreign policy dominating the headlines, we expect Corker to be a contrarian voice to the administration's State Department."

Given the Internal Revenue Service scandal, Shelby would likely try to rein in the agency's power. He also supports bringing back earmarks, which might emerge as a key issue for the committee. In the HuffPost interview, Reid also predicted the return of earmarks.

McCain would be next in line because ranking member Sen. Tom Coburn (Okla.) is retiring. However, Republican Senate staffers think McCain wants to chair the Armed Services Committee, which would leave either Johnson or Portman next in line to take over Homeland Security.

Crapo is the current ranking member. Shelby actually has seniority over him, but Republicans expect Shelby to lead the Appropriations Committee.

Murkowski would likely be the only woman to grab a Senate chairmanship if the GOP wins in November. She supports the Keystone XL pipeline, which will be a hot button issue for the Energy Committee.

Fresh off his victory in a primary runoff, Cochran has told Republicans he is interested in chairing the Agriculture Committee. However, the memo notes that he also has seniority on Appropriations.

Roberts, the ranking member, is likely to get the chairman's seat. The next Republicans in line have other chairmanships in their future: Cochran (Agriculture), Alexander (Health, Education, Labor and Pensions) and Shelby (Appropriations).