By Adanjesus Marín and Natalia Aristizabal 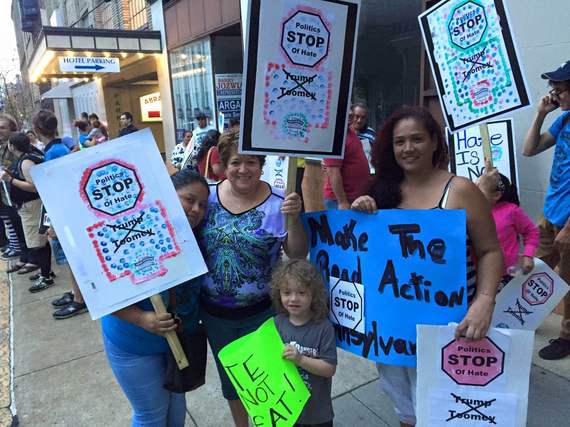 From President Barack Obama's first day in office, Senate Republican leader Mitch McConnell made blocking the President his raison d'etre. He spent the entire two terms of President Obama's term obstructing everything he could, going as far as proclaiming in 2010 that making Obama "a one-term President" was his principal objective. More recently, he refused to even hold hearings, much less a vote, on Obama Supreme Court nominee Merrick Garland, nearly a year before the end of Obama's term.

McConnell's eight years of obstruction was wrong. It was craven politics that reflected nothing more than partisan warfare, and Democrats were right to rail against him.

Now, in the era of Donald Trump, Democrats are wondering: Should we draw from McConnell's playbook and use every effort to block Trump's extreme platform?

The answer is yes: gumming up the works in Congress will not only be the most effective strategy, but it is also morally justifiable. Here's why.

Mitch McConnell's bet was that American voters would blame the President for Washington's failures. He cared far less about the substance of policy and far more about positioning his party for future gains. By ensuring that his caucus voted in lock-step -- on appointments, health care, the budget, and more -- he could prevent the Obama administration from carrying out its priorities. And, when President Obama confronted these efforts to hold government hostage by taking executive actions in instances where there was scope for it, McConnell and his supporters then railed against presidential overreach. In short, obstructionism over the past two terms was a cynical and morally bankrupt ploy to weaken a President, which for Republicans had the benefit of reinforcing their central critique that government is ineffective and inefficient.

Obama, a particularly skilled orator and campaigner, overcame McConnell's concerted effort to make him a one-term president and won re-election easily. But over the longer term, McConnell's strategy was as effective as it was odious. Democrats lost roughly 1,000 state legislative seats since 2008, and now, in addition to losing the White House in 2016, they will be in the minority in both the House and Senate. Republicans are understandably feeling vindicated in their obstructionist strategy, even as they prepare to govern with across-the-board majorities.

Democrats, meanwhile, are presented with a conundrum. As the party that has always believed that government can actually work, some key figures are understandably wondering if they can be justified in mirroring McConnell's strategy. But, while it may feel uncomfortable to follow the same strategy one opposed so vocally, there is a strong moral case for obstruction in the Trump era.

The core reason for Democrats to use the filibuster and every available parliamentary tactic to block the Trump agenda is that the President-elect has pledged to cause grave harm to many different communities in this country, and there is a responsibility to protect them. Trump has pledged to devastate immigrant families through mass deportation, Muslims through surveillance and potential registration, and people of color through stop-and-frisk and other criminalization efforts. His appointments thus far, far from showing "softening," have included notorious racists Steve Bannon and Jeff Sessions, with more odious people likely to come.

In short, the threats from the incoming Trump administration are qualitatively greater than those of any recent major party nominee. And there is a moral imperative to stop this reckless agenda: Democrats must stand with the most vulnerable people in our society when they are under attack.

If Democrats cave on anything -- for instance, a deeply-flawed infrastructure bill that they fear will appeal to the white working-class -- they will be handing legitimacy to a Trump administration that will use that political capital to double-down on attacking immigrants, Muslims, and people of color. After all, Trump's winning formula thus far has been precisely that: a combination of misguided economic populism with white nationalist appeals. There is no responsible way to negotiate with such an administration.

Beyond the intrinsic case for obstruction, blocking Trump at every turn is also sound strategy. The only reason that Democrats may give in to working with the Trump administration is that progressives tend to believe that government can work -- that it can provide public goods like public safety, clean air and drinking water, and an effective social safety net. But if Democrats cede ground and allow Trump to proceed with his agenda, they will be further vindicating the Republican strategy: obstruct long enough, Republicans will say, and eventually Democrats will fold because they are unwilling to bargain as hard as we are. Republicans need to see that Democrats mean business.

We all know that Washington is broken. Polarization between the two parties has increased, communication has broken down, and the ability to negotiate fairly and efficiently -- without stalemates that take us to the brink of government shut downs and defaulting on our national debt -- has fallen by the wayside. But, frankly, this is the fault of Republicans -- who have presided over the deterioration of our political norms since Newt Gingrich's tenure leading the House.

With immigrants, Muslims, and communities color facing likely existential threats, Democrats in Congress cannot responsibly engage in deal-making with the Trump administration. They must prove their mettle by defending vulnerable citizens and residents of this country with every fiber of their being.

Only once Democrats in Congress have passed this moral and strategic test should they reconsider their strategy. After the grave threat to American communities has subsided, the two parties in Washington can engage again in the discussion of how to fix our broken political system.

Adanjesus Marín and Natalia Aristizabal are, respectively, the Pennsylvania State Director and organizer of Make the Road Action, a grassroots immigrant organization. Follow their work: @MakeTheRoadAct