Who's Afraid of Bernie Sanders?

• Why is the US - the wealthiest nation in the world - behind some other countries in meeting the needs of its hard-working middle class?

• Why doesn't every American have access to healthcare as a basic right?

• Why can't every qualified American get a higher education?

• Why can't we have full employment at a decent living wage?

While the US is cutting numerous social programs, many other countries are moving in the opposite direction, so his questions resonate widely.

Senator Sanders maintains that the poor status of many Americans results from bad policies, such as outrageous tax loopholes for billionaires and large corporations. For example, the top tax rate is less than half of what it was during the postwar economic boom and the real minimum wage has fallen dramatically since the 1960s.

The solution may lie in selecting the best tried-and-tested social programs functioning in Great Britain, Norway, Italy - or those with even better controls on costs and service, such as in Japan, France, Germany, Canada and Denmark, the senator believes.

His plan of addressing wealth and income inequality is about closing the loopholes to the 1-percenters class. Should we be afraid?

Many Americans fear the very word "socialism," and for obvious reasons: memories of the Cold War and the Iron Curtain have been fueling this emotion of fear for years, capitalizing on the originally rugged mentality of the pioneer country which has become a mighty power due to the capitalism. Evolving like all systems do, this untamed capitalism seems to have turned the tables on its own creators, the American people, and the widening gap between the rich and the poor exacerbates the unfortunate conditions of the poor. Some, including Senator Sanders, seek a way out by looking at what other democracies have successfully implemented, borrowing from their basic people-care/social-justice ideas.

I, for one, am not scared of those ideas--only of their potentially poor implementation. Like countless others who made a dash for freedom emigrating from the socialist societies - the USSR, its East European satellites, China, Vietnam, or Cuba - I know that these countries have all been but different flavors of the "big brother" socialism of the Soviet Union. So today, we are instinctively averse to many things even remotely considered "socialist." And this is why.

What "Extreme" Socialism Is

Branding Senator Sanders as "socialist" scares many people. But in his case there's nothing to be afraid of--because his definition of socialism means preserving free market and civil liberties and adding a higher level of social justice. His vision of socialism is far removed from the best-known kind of socialism which I call "extreme": the system implemented in the world's "evil empire."

The original socialist ideas drew on the attraction of early Christianity and took various forms. They were finally fortified by the studies of Karl Marx and Friedrich Engels, which were balanced - until vulgarized by Vladimir Lenin and further compromised by Joseph Stalin. Stalin managed to implement his primitive ideas of socialism, "extreme" socialism: total control over economy and people's lives. The triumph of these ideas-in-action lasted for over 70 years, and the huge monster of the USSR locked 286 million people behind the Iron Curtain, feeding them a special diet of quasi-socialist mentality, or Soviet national pride. Now, that was scary! I know it first-hand: I'm a survivor!

While I was working on a book about outstanding immigrant women, the issues of flight from "extreme" socialist regimes came up frequently enough for me to make a point about it here.

Consider the case of Rosa de la Cruz, a prominent art philanthropist, (pictured at left, with author), and an exile from Cuban Castro regime. She fled with her family after the regime started expropriating money/property not only from the rich but from all. 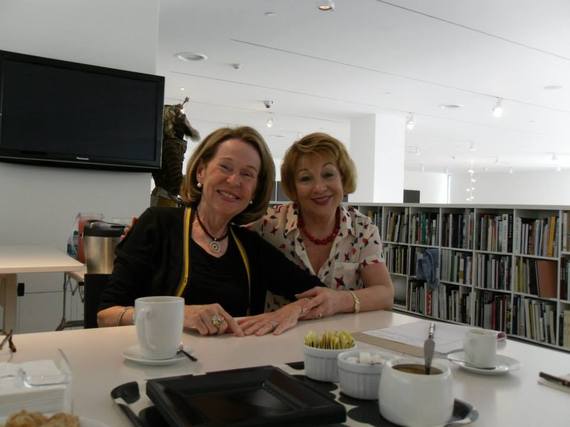 De la Cruz family was recently recognized by the Town & Country as one of the 50 Most Powerful Families. In our interview, however, Rosa set the record straight:

I am not impressed by wealth... Some folks are more materialistic, but we place spiritual over materialistic... Unfortunately, the US is turning into an anti-intellectual society. So we need to take more care of educating the young and influencing their perception of life, creativity and the world art.

Consistent with these ideas of social justice, Rosa de la Cruz came up with a new philanthropic concept, complete with new premises, way of implementation, and funding. A special 30,000-square-foot three-story house for her stunning collection is functioning as free museum and free art education institution for the young in Miami, Florida.

My point is that being affluent or of moderate means can perfectly coexist with progressive thinking, and the immigrant family found the super solution to express their social-justice attitudes -- without being "extreme" socialists like Fidel Castro.

Everyone needs to know what modern socialism is really all about - to keep them from jumping to false conclusions. Let's review the situation.

Clearly, the problem with applying the European model of social justice is the fact that America is not Europe: in a number of ways, the New World is more traditionally-thinking than the old one. Senator Sanders, the most left-wing presidential candidate, calls himself a socialist, not a revolutionary, but the bad rap regarding socialism is here to stay--which leaves him but slim chances for American presidency.

Among his Democratic Party rivals, polls show Hillary Clinton consistently beating Republicans and someone who can hold the White House--despite being a woman, and not because she's a Clinton. She may want to incorporate some of Senator Sanders' ideas--and offer a customized, naturally American implementation of better social justice--which will make the nation happier. She is sophisticated enough to attempt that!