On Monday, actor Tim Robbins of Shawshank Redemption fame made an ill-considered political dig against Hillary Clinton by making a punchline of disenfranchised voters in Guam, declaring at a Bernie Sanders rally that "winning South Carolina in a Democratic primary is about as significant as winning Guam."

Less than 24 hours later, Senator Elizabeth Warren took a stand for Americans who call Guam and other U.S. territories home, arguing at a Senate hearing that "the four million people who live in the territories are not the subjects of a King. They are Americans. They live in America. But their interests will never be fully represented within our government until they have full voting rights just like every other American." 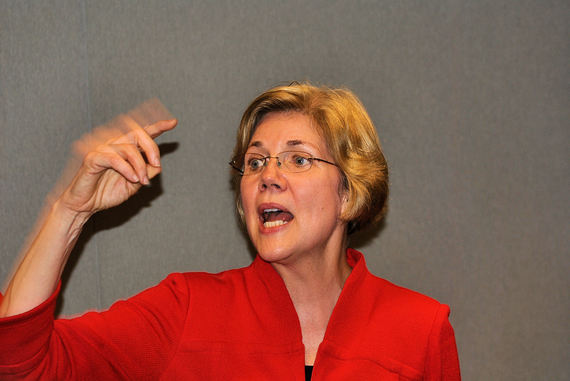 As Senator Warren explained, Americans living in U.S. territories "are subject to federal law. More than 150,000 people from these islands have served our country in the Armed Forces - and many have died in that service." Continuing, she highlighted that "these four million Americans have almost no say at all in federal decision-making even when it directly affects the islands they live on. They can't vote in presidential elections. They have no Senators. And each territory gets only one non-voting Representative in the House."

Senator Warren unpacked things further still, noting that a resident of Guam can gain the right to vote for President by moving to California, and can even keep voting for President if she then moves to Italy. But if she ever moves back to Guam, that right once again is denied. "This is absurd," Senator Warren said to her colleagues, "four million Americans live on American soil and can fully participate in our democracy - but only if they leave home. At their homes - on U.S. soil - all of their representational rights disappear."

This isn't just absurd, it's unconstitutional. In Segovia v. Board of Election Commissioners - a federal voting rights lawsuit we have filed on behalf of residents of Guam, the U.S. Virgin Islands, and Puerto Rico who would be able to vote for President if they lived literally anywhere else in the world - we argue that the right to vote should not depend on where you happen to live.

Lead plaintiff Luis Segovia served two deployments in Afghanistan, most recently following the 2012 election when he shipped out with more than 600 members of the Guam National Guard. Earlier, he served in Iraq, providing security for the 2005 Iraqi elections. Yet, based solely on the place he calls home, this decorated soldier cannot vote for his Commander-in-Chief.

Another plaintiff, Pamela Colon of St. Croix, VI, is a defense lawyer who has defended clients against federal criminal charges that could put them in jail for the rest of their life. Yet Virgin Islanders and other territorial residents have no say in the Congress that makes federal criminal law, the federal prosecutors who enforce those laws, or the federal judges who try and sentence criminal defendants.

As Senator Warren explained on Tuesday, this contradicts the "central principle in our American democracy that Americans, through their votes, can have a say in their own governance."

As earlier civil rights movements have demonstrated, legal action alone is not enough. In the coming weeks, we will announce a new proposal to build on the approach of the Twenty-Third Amendment (granting the right to vote to residents of the District of Columbia) to provide full enjoyment of the right to vote to Americans in U.S. territories.

As many Americans have learned this hard-fought election cycle, U.S. territories actually do participate in presidential primaries despite not having a vote in November. Primary voters and delegates in Guam, the U.S. Virgin Islands, and other territories should demand presidential candidates seeking their vote take a position on a right to vote amendment for citizens living in U.S. territories.

Disenfranchised Americans in the territories are truly swing voters who are up for grabs and who shouldn't be taken for granted by any party or any presidential candidate. And let's not forget, there are also more than 1 million Puerto Ricans now living in the crown jewel of swing states: Florida.

I guess Tim Robbins didn't get the memo. Regardless, he should personally apologize to Guam voters before they caucus on May 7th.

U.S. citizens shouldn't be denied the right to vote for President because they live in a U.S. territory. Senator Elizabeth Warren got it right: "This kind of second-class status is not how our government is supposed to work."

Sign a petition to support equal rights and representation in U.S. territories at www.EquallyAmerican.org.

In an attempt to draw attention to the mainstream media anointing Hillary as the presumptive candidate after only 4 states had voted, I was making a joke about size and significance and I did so at your expense. For that I am truly sorry. I did not mean to disparage you or your say in the democratic process. In fact we would all be better off if everyone in Guam could actually vote in the presidential election.

If HuffPost would be interested in covering this by a reporter, I'd be happy to comment and connect you with Congresswoman Bordlalo or others for additional comment.

President and Founder, We the People Project