As the International Criminal Court begins the prosecution of Major General Dominic Ongwen, we call for him to be sent home to face justice.

A little over one year ago, Major General Dominic Ongwen, the notorious senior leader of the Lords Resistance Army, turned himself over to authorities on January 7th, 2015 through the circuitous route from the Seleka rebel group, to the US forces, to the Ugandan military, to the Central African Republic to the International Criminal Court where he now faces charges for crimes against humanity.

Major General Ongwen was a notoriously brutal top commander who spent his entire adult life in the Lords Resistance Army (LRA) which terrorized communities in Northern Uganda, South Sudan, the Democratic Republic of Congo and the Central African Republic. Through his actions as a leader of the LRA's ongoing civil war, thousands of children and their families were killed, maimed and displaced.

Along with hundreds of civic leaders and everyday heroes in the region, the Acholi Religious Leaders Peace Initiative (ARLPI) have worked for over three decades to protect the "night commuters," limit the abduction of children and broker a lasting peace agreement. In partnership with the Goldin Institute, ARLPI has more recently launched an initiative to train teachers in reconciliation methods and built a national-level partnership in Uganda to empower former child soldiers to lead the way on reintegration programs to heal war-torn communities and bring war-affected children home.

We have seen firsthand the destruction, the displacement, the years of missed schooling, the tragic loss of life, the sexual slavery, the abduction and trauma of child soldiers, the forced eating of human flesh and orders to kill family members, the scarred faces and missing limbs of children and parents that is the result of the LRA war.

We know firsthand the cost of the carnage and the need for justice.

What could be more clear than demanding justice in the face of these crimes against humanity? 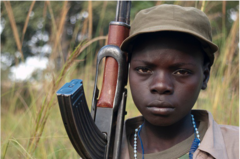 As we stand in solidarity with the children of the region who have born the worst of the cruelty and human rights violations, we must acknowledge that Major General Dominic Ongwen was also one of these children.

Before he was a feared and notorious commander, Ongwen was child who became a victim of the LRA when he was abducted at age 10 while walking to school. He had already been brutalized, indoctrinated and forced to commit unspeakable atrocities before he was 12 years old. He was told that he was doing God's work by being a soldier, cleansing his country by killing, and defending his family and neighbors from southern aggressors.

There is no denying or excusing the crimes against humanity that were committed by Major General Ongwen. At the same time, like other children in the region, Ongwen was failed by our families, our churches and mosques, our communities, our institutions, our governments and the international community who had responsibility to care for and protect our children.

Ongwen's dual status as both a victim and a perpetrator leaves us all grappling with many troubling and vexing questions. Should a child forced to commit atrocities be prosecuted for the same crimes for which he or she is also a victim?

Perhaps most importantly, who should be empowered to make these difficult decisions about the nature and practice of justice?

While the International Criminal Court now has custody of Major General Ongwen as well as his fate through his trial, many in Northern Uganda argue for his return home to face justice of a different kind. The Acholi Religious Leaders Peace Initiative and others believe that real justice can not be achieved through prosecution at the Hague, but rather are calling for the use of Mato Oput, the cultural justice system that is traditional and indigenous to the Acholi community of Northern Uganda from which Dominic Ongwen comes.

Mato Oput is a community-based social justice system that is holistic in nature and seeks restorative rather than punitive justice. For Ongwen, this process would start with rituals of truth telling that permits no lies, deceptions or denials in front of the whole community. We have seen the power of similar truth and reconciliation processes in bringing a sense of justice, healing and reconciliation to local communities for centuries. 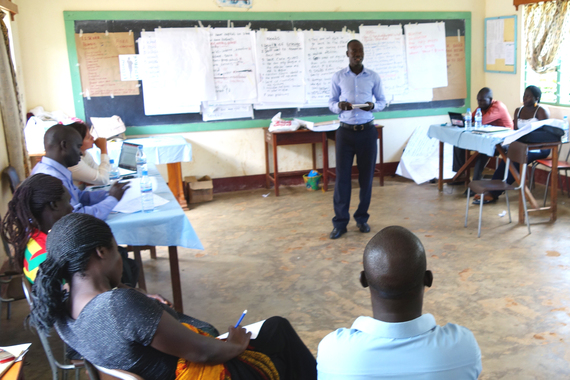 Along with many other components of the Mato Oput justice system, such as the nyono-tonggweno ritual, we can help restore the humanity of all victims, including Ongwen, and begin the healing process we so desperately need after decades of bloodshed. Restorative justice is the best chance to heal as well as inoculate communities from these horrific crimes of using children as combatants in the future. If there is anything useful that can be learned from Ongwen's experience, the people of Acholiland are best equipped to uncover it.

Some in Uganda and around the world will argue that justice demands his prosecution and punishment. Further, some will argue that a trial at the Hague will enable a justice that is globally recognized and will serve as a deterrent. We do not deny that the International Criminal Court can play a critical and helpful role, especially in cases when local tensions and power imbalances make it difficult to achieve a fair and legitimate trial.

However, Ongwen committed his crimes in communities far from the Hague. In the words of Sheikh Musa of the Acholi Religious Leaders Peace Initiative,

It was our community that failed to protect him from abduction. It is our community that needs restoration and justice. Our fates and our justice are intertwined with former child soldiers like Ongwen who remain our children and should be recognized as some of the most deeply scarred victims of this war.

We are pleased to announce that the Acholi Religious Leaders Peace Initiative stand willing and ready to accept Major General Dominic Ongwen home to face justice through the use of Mato Oput. We pledge to continue our joint efforts to reintegrate former child soldiers back into our communities and into the work of bringing true, restorative justice to the people of Uganda and the region.

Alone and Frightened: Community Based Oral Testimony of Former Child Soldiers of Uganda

Executive Director of the Goldin Institute