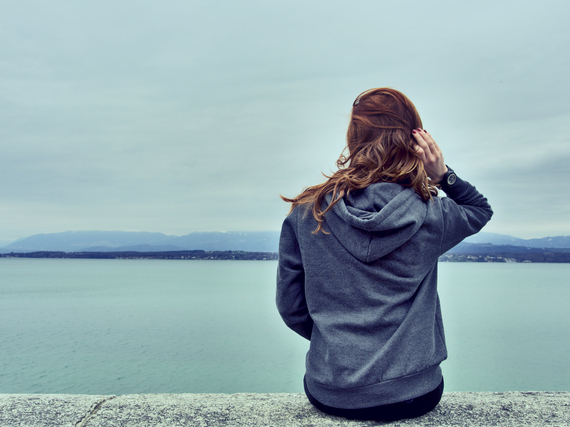 Whenever I talk about it, I get the look. Faces turn immediately sympathetic as whomever I am talking to says some variation of "That must have been terrible," "Poor thing," or "Are you OK?"

This past year, I sent my mother to rehab.

Addiction is something that I always knew ran in our family. I knew that there were risks and I knew that if I didn't pay attention, I could find myself looking at the bottom of a bottle... or two or three.

Over the years I spoke with many people about it -- friends, family and therapists. I always said that I was afraid that I would grow up to be an alcoholic, but I wasn't really ever ready to talk about why.

I had known for years that my mother was struggling with alcoholism; I saw the day-to-day realities of the disease first hand. I'm sure some of you know exactly what it's like growing up with an alcoholic, but for those of you that don't, I'll let you in on the details, at least the details of my particular alcoholic.

Many days looked normal. It was in the evenings that things changed, in relation to the number of glasses of wine that she drank. I learned to be quiet, to try my hardest not to spill milk on the table, to head straight to bed if she had more than three drinks.

It wasn't that my mom had to drink every day, it was that if she drank one glass of wine, she was going to drink the bottle.

As a child, I didn't have the tools to understand that there were two personalities hiding inside my mom. There was the mom who drove me to soccer practice and there was the mom who was perpetually angry, screaming and raging into the night if things didn't go exactly according to her plan.

As a teen, I cried with embarrassment after mom picked a date and I up from the movies drunk and ran over a light in his front yard. It was our first date.

As a young adult, I was thankful for a boyfriend who held me after my mom told me "Go fuck yourself" on my 21st birthday. The next year, it was the same boyfriend who talked me down after my mom visited us on the West Coast and took the opportunity to tell him that she thought he was a "nobody going nowhere."

As a mid-20 something, I maintained a baseline paranoia about what was happening at home while I was away.

Over the course of those years, each time her alcoholism was brought up, we somehow swerved out of the conversation, sweeping the issue back under the rug. But these things never last; you can only gloss over the truth for so long.

Addiction is a disease that will not go away when ignored; instead it digs its claws deeper into your life with each day that passes.

Growing up, and well into my adult life, I chose to keep the fear to myself. I painted myself into a corner where I felt like I couldn't tell anyone what was happening. I didn't want to betray my mother, but I also didn't want to admit that I hadn't done anything to try to make her change. By keeping this all to myself, I denied myself the help that I needed.

This past Thanksgiving, emotions ran high at home, spurred on by the addition of wine. It was the classic story in our household -- a family dinner gone wrong. It was mom with a few glasses of wine, then a few glasses more. It was the lightening fast anger bubbling up inside of her that broke free of its reins after glass six. An argument snowballed, bitter words were exchanged, children retreated and a war waged between mom and my (soon to be ex) step-father.

After years of ignoring the problem, I woke up the next morning knowing that I had to say something. The night before had left me feeling emotionally spent and burned out on the bullshit. I knew that there were two choices -- I could never come to another family dinner, or I could take a deep breath and address the problem. It was time.

You know that addiction is living in your house and you know that until now you have extended it the invitation to unpack its bags and stay a while -- but that needs to end.

That is how I spent the morning after Thanksgiving, hearing the words "I think you are an alcoholic," come out of my mouth. Hearing my mother say "I know."

Being around her was a constant guessing game -- which woman would you get?

So, I ripped the Band-Aid off. Addiction was no longer the elephant in the room; the spotlight was shining firmly on it. The next two months brought no resolution, but brought on the first series of panic attacks that I had ever experienced.

It wasn't until the New Year, after waking up to the realization that she had kicked her husband out of the house (good riddance), that mom was ready for rehab.

All the years of waiting with baited breath, and I still couldn't breathe. Instead of relief, I was struck with an overwhelming wave of anxiety. Fat tears of despair rolled down my face as I worried about what the coming months would bring -- would she be OK? Would she stay? Would she be able to manage after leaving rehab? Did I need to worry?

If I said it hasn't been hard for me, I would be lying. It was awful, soul-wrenchingly painful and I may continue running up therapist bills well into the next decade.

But today my mother is in recovery. To me, she is the picture of perseverance, of hope, of strength, of love. She is a woman unafraid to speak the truth about addiction. She is a success story, she is an advocate, and it is all due to her hard work and dedication. I have never been prouder to be her daughter.